Pretty much in the same way as a mouse wanders through cheese, in and out of holes, chewing wherever she happens to find herself, so we seem to discover the Galilee. Or at least a very small part of it. We started driving north with the idea of reaching the Villa Provence in Manot about two, but when we got near Zichron Yaakov I remembered that I had bought some handmade paper stationary there about five years ago and was now out of it. I remembered there was a place across the street from the Aronson house (where Sara Aronson killed herself so as not to give away secrets to the Turks who had come to arrest her – but that’s another story), and eventually found it. Tut-Neyar Papr MillWhile there we recognized some paper artwork that we had just seen in the Land of Israel Museum, and I got all enthusiastic. We bought a few things, but I took home many more ideas. (By the way, if you ever get a letter from me on homemade paper, you know the letter is really important to me!)

Then we had coffee at the corner across the street from the synagogue, but instead of gazing at the historical structure, I spotted a teva-naot shoe store and crossed over to buy a pair of Moran Sandals to relieve the pressures my Galapagos shoes were putting on me.

This deviation from the plan made me forget our goal, and so we didn’t stop at Acre for lunch, or Nahariya either, but turned in to Lochamei Haghettaot to see the museum of ghetto resistance there. Now that is a place that makes you forget where you are going, and remember where you came from. The smiling German faces - watching the blank suffering of Jewish faces – entered my dreams and reminded me of my childhood nightmares.

The wealth of photographs of individuals, sitting with their families, posing for a passport picture, or being recorded for posterity by their persecutors, overwhelm any statistics I have ever known. The statistics of Lochamei Haghettaot are a little staggering as well. Their calculation is that 24,000,000 soldiers, 31,000,000 civilians, including 6,150,000 Jews, were lost in the war. Thank goodness for the beautiful view of the Roman acquaducts, which gave me the energy to breathe. 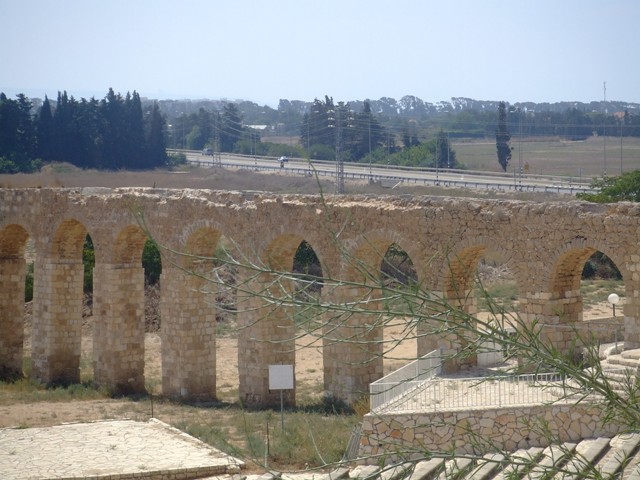 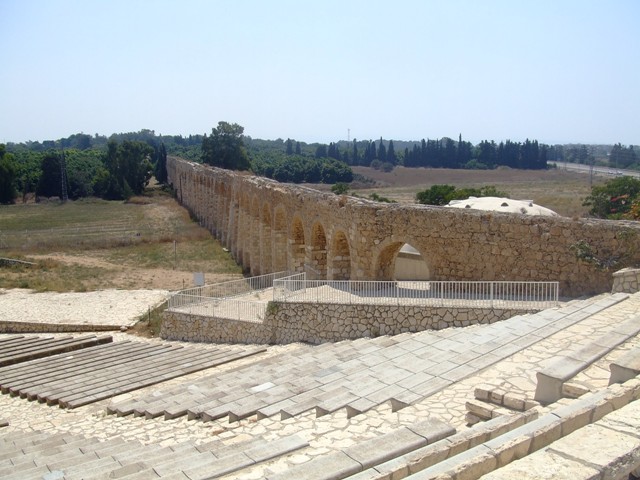 So we continued our trip, having forgotten we had to have lunch somewhere before our scheduled massages at 4 at the spa at Villa Provence. Fortunately, even though the spa doesn’t serve food, except for breakfast, and even though the grocery store and the café were closed for lunch, there was a knock on the door of our room and cakes and fruits appeared. This did wonders for my opinion of the place. The massage also helped a great deal. That’s when I looked around and saw we had picked a winner – a charming little visit to Provence in the middle of Israel. Especially for people like us who can’t really handle the whole travel experience at the moment, but really need a change of scene.

We took off for dinner after a short rest, and found ourselves in Liman, where the Morganfeld Steak House (the expression ‘in dred affn dach,” or “in the attic of hell” comes to mind) awaited us. It was amazing. And such large portions! (Remember the woman complaining about the food at some restaurants? She goes on and on about how bad it is, and then adds, “and such small portions!”) We ate until it hurt, then took the leftovers home – part of an amazing fillet and a 350 gm hamburger) and they served as additional meals the next day.

After a very delicate, aesthetic, and tasty breakfast at VP,...

For today's news, come back tomorrow.

We decided to get to Montfort Castle. But even though we got to the closest places you can park, and walked for a bit in the hot sun from south and (having driven around the mountain and wadi) then from the north, we didn't make it. It was too challenging. So we gave up and drove to Rosh Hanikra, to spend a little time in the grottoes, 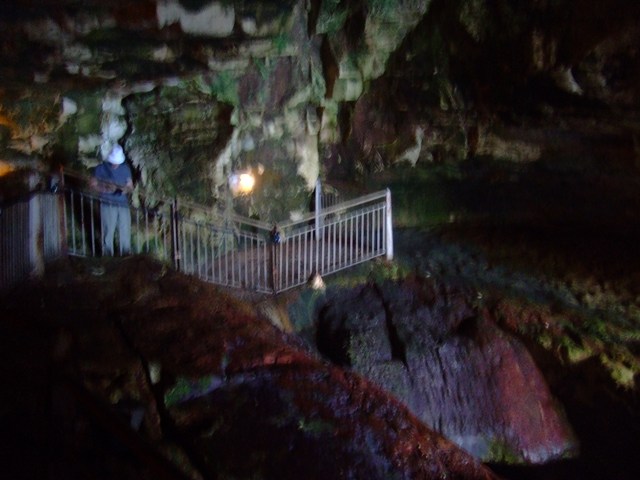 And then to lunch in the newly opened brew house overlooking the white rock. I couldn't imagine how this place survived, until I taste the local beer. The food too was gorgeous. We weren't the best of eaters, having been overfed the night before, but we were accomodated beautifully in our desire to eat lightly. 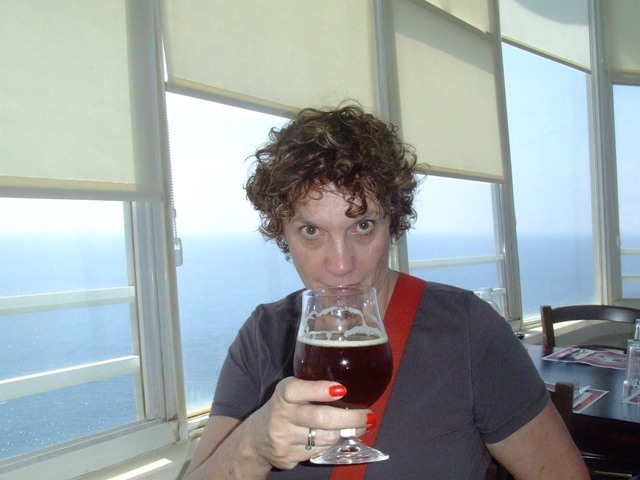 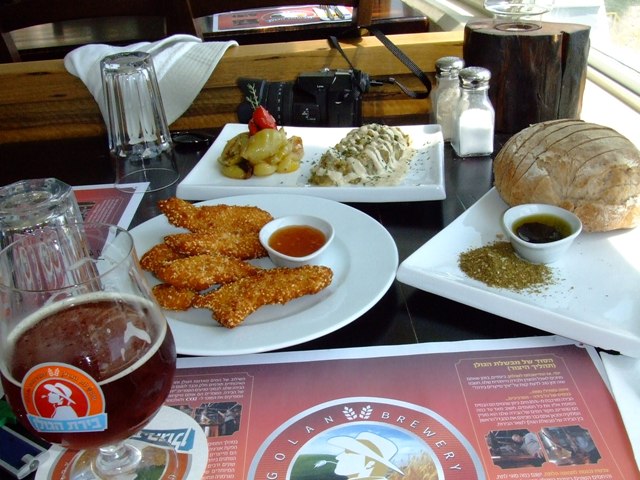 Once we got ourselves together again we drove to Kibbutz Cabri for dinner at Adelina's, Another winner.

We continued with all this pampering the next morning - steam bath, jacuzzi, swimming in the little pool, etc. and thought to just keep going with lunch at Abu Christos in Acre. A little visit to the local shuk, however, gave me the culture shock I deserved. The poverty, the neglect, seems so wrong in so many ways. It is not only because it behooves every one in this country to make sure every citizen lives as well as possible, but also because the residents are living in an ancient site, which could well be a great source of income to them as well as to the country.

Photographs to come soon, but right now I've got to prepare to get my computer exchanged. The Dell people have come through and given me a new Dell. Tomorrow.

Do you think I may have made a mistake is picking this portentious day for my new computer?

I understand that the extremely strained mood at the market in Acre, the serious faces, the pain, was not only due to the fasting of Ramadan or our intrusion, but also a double murder that had just taken place nearby. It stays with me, the feeling of Acre.

Even the place where the children like to dive is under renovations. But it is gorgeous 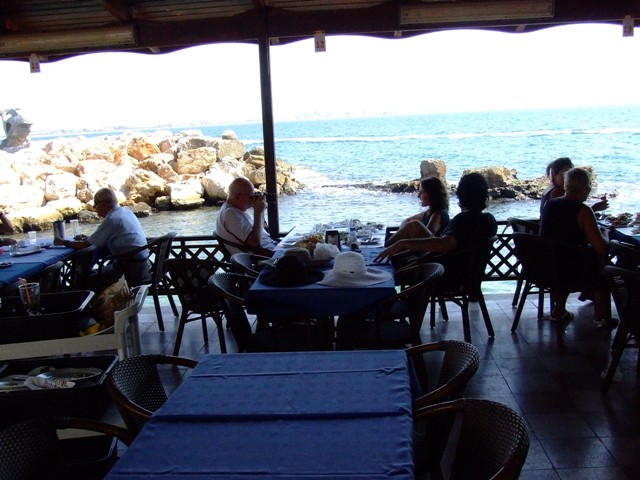 Eli Nawi won the bronze medal in 1000 meter rowing in the paralympics today here! The Daniel Amichai Center is incredibly proud this day! This is the fourth medal in this competition for Israel!

Our street remains a relative paradise for stray cats. Since most of them are neutered, there are few fights, more food to go around, the crop of kittens is small, and the cats seem to know who their friends are. They also appear much more caring of each other because there is less competition, and I have seen gratuitous acts of kindness among cats that I had never seen before. This is from sixty years of being crazy about cats - I was always threatened with what my mother called "katz-in-kop" disease (which I could probably translate as a cat obsession). I actually think it is more respect than intimacy.

Naim Araidi's celebratory luncheon on his professorship was worth the long trip up to Maghrar today. He not only welcomes his guests with the greatest of care and warmth, but I never leave his village without learning something entirely new and learning how little I know. He is careful to teach us slowly about the Druze religion, about the Koran, about the Bible, dropping a few nuggets in his welcoming words, reminding about history.

new dell doesn't work. my week's work is gone. pray for me.