I'm writing this before the day begins because I haven't figured out yet what I will be able to do today. There are empty shelves in my kitchen from the extended holidays but I figure it will be impossible to buy fresh food until they get restacked later on in the day, and anyway I don't want to face a supermarket. And anyway if I can hold off until the end of the month my overdraft won't reach the amazing proportions of lat month. But I'll have to go out anyway to the bank, to renegotiate the terms of the overdraft, and I have to get cash for my cleaner (who doesn't pay income tax but gets social security. Go figure.

So that's my morning.

It took me too long to get to it. And then all I got from the movie "Adjami" is that men should really not be trusted with their lives. The women in the film just sit around and cry and the men screw up. I don't think it would matter who was running things, and the problem the film shows is bigger then the occupation or the Middle East.

Each and every Muslim I know personally is a fine, upstanding person, and I know many. But every scholar of the Koran that I have met has warned me of its contents, and here there seems to be justification for the warnings. I have not read the Koran myself, except for a few passages here and there, so I am not the authority on this issue, but you want want to check it out and get back to me.

Thanks for getting back. Several people have 'reacted' to the clip I linked to yesterday. Everyone has heard or read something that either fits or doesn't fit the clip. None of us so far have read the Koran! Personally I don't like word bytes or anything in brief sentences that 'tells the truth.' Wait! This just in from Bev, who HAS actually read the Koran:

That video seems very biased. I have read most of the Koran and also lots about it from documented sources. The general notion is that the awful laws, stonings, etc., are relics of Tribal rather than Religious law. In fact, the point the video makes about violent passages at the end of the Koran do not square with truth. I saw more violent (same as in the Psalms) passages in earlier suras, but I'm not an expert. It looks to me like Islam has been hijacked by Mideastern power folks to gain whatever they want, oil, money, etc.
Early passages discuss holy war, but "Fight for the sake of God those that fight against you, but do not attack them first. God does not love agressors." (Sura 2)
The last passages are similar to Revelation in the New Testament. And here is Sura 109: "Say: 'unbelievers, I do not worship what you worship, nor do you worship what I worship. I shall never worship what you worship, nor will you ever worship what I worship. You have your own religion, I have mine.'"
The constant teaching of the Koran, to the point of incredible repetition is, Do good, be saved. Do evil, go to hell.
As to stoning adulteresses: Sura 24 recommends 100 lashes for both adulterers and adulteresses. And then they can marry only other adulterers or adulteresses. And I do recall a saying of Christ in the NT, "Let him who is without sin cast the first stone," in the story of the woman taken in adultery. That was hundreds of years before Mohammed was born.
So in other words, I think the video is off base. But the leaders of Saudi Arabia et. al. are evildoers and God the Great, God the Merciful, will get them someday, according to the Koran.
Some of the later Suras are very poetic, in fact. And I just read somewhere that in a new book, someone suggested that since Mohammed was illiterate like all businessmen of his time, the scribes who wrote down what he said were Jews. Hence Abraham, etc. .

Gershon Baskin has an interesting take on what to do now that we have stood up to the world and declared no one is going to tell us whether to build or not. In Today's Jerusalem Post he writes:
The settlers offer no solution, they have no idea how we can occupy all the land and continue to ignore Palestinian rights. Continuation of the settlement enterprise is national suicide wrapped in a veil of divine inspiration, nationalist fervor and militant opposition to the entire world. The settlers and their leaders are prophets whose self-fulfilling belief that the entire world is against us is coming true.
We, the people of Israel, need to stand up and declare – yes we won, we withstood the world, we said no to the US president, we are stronger than all the powers of the world combined. Now let’s stop settlement building. Let’s negotiate real peace in good faith, not because we are being pressured into doing so, but because it’s in our own self interest.

We're selling the Aminach beds that caused us such woe a few years ago. We've already replaced them, and are sleeping well on something like Simmons mattresses, but we need the space in my study. We also need a spare room couch-bed for the relative naps and sleep-overs. So I thought it would be a time saver to go to the furniture fair at the fair grounds. What a mistake - nouveau-bourgeois at its worst - everything overstuffed white leather with a little chrome strategically placed. It's like people want to live in their lounges in front of the television. We have a small apartment and like it that way but even if we liked filling it up with disguised foam rubber we'd never manage to fit all that in.

What were all those people doing at that fair? Whole families sitting in a gold lame couch set and discussing whether they can get away with one flat screen or need two. And the vibrating orthopedic beds, the back massage machines made me realize that this fair was catering to the idea of the ugly israeli, the flabby jew and/or arab. There are a lot of people not like that, but few of them were at the fair. 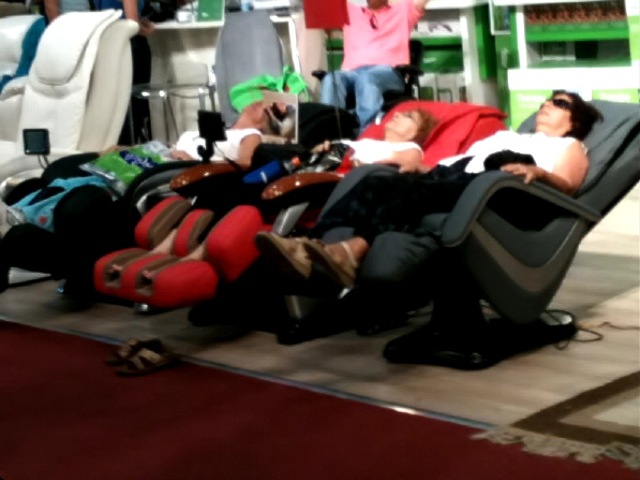 If you do nothing else today, sign this petition asking Tony Blair - Office of the Quartet Representative (UK) -to demand Red Cross access to Gilad Shalit: Here

. Even though our physical activism has diminished throughout the world, our power to change things through electronic activism may well be more successful.

And there is no doubt the Red Cross is responsible for prisoners of war.