I can see that everyone here is using these 10 days for purification. Old friends who disappeared years ago have suddenly turned up - long-lost relatives are inviting us for coffee - charities i haven't heard from for months are running after us for donations - and conversations seem to be much more profound than usual. Today I found myself sitting with a perfect stranger, both of waiting for our mutual acquaintance to arrive, and heard the problem of trusting an other after a painful divorce. I shared my own history with him, all the time wondering at the situation. An hour later, at a business meeting, someone whispered to me as I was leaving, "I've always admired the way you lead your life." It blew me over. We'd never had any personal conversation in a long acquaintance. I think I attribute the intimacy to the need for reflection. My own conversations seem to be more profound, with a sense of hovering finality.

Halleluyah. He was here. Yes, I was one of the 50,000 odd sardines cramped together in Ramat Gan Stadium who fell in love all over with Leonard Cohen. Yes, I sang the words while he stood silent smiling. Yes, I was blessed along with the others with the Priestly Blessing. photo to follow. 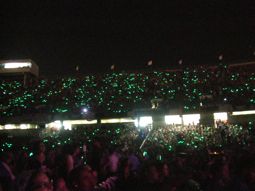 A little more about Leonard Cohen. Tomorrow is Shabbat Tshuva, the Sabbath of Return before Yom Kippur. Cohen's concert was superbly appropriate for these high holidays. Not only because the entire concert was dedicated to the grieving parents of those lost in the struggles here on both sides, but also because of his entire conscious structure. He opened his act in Ramat Gan stadium by greeting the audiences with "Ma tovu ohalecha yaacov, mishkenoteha Yisrael" or "How goodly are thy tents, O Jacob, and thy tabernacles, O Israel!" and welcoming the screaming crowd. His inclusion of the audience was only one of the 'tricks' to bring everyone together and to effect a situation of mutual worship. "Who by fire" won over those previously untouched, and all the steps toward the 'nehila' of "Halelluyah! worked together to make the whole concert into a kind of purification.

How many times have I been close to a heart attack because some motorcycle grazes my side-view window while I'm cruising along in Tel Aviv, or appears before me out of nowhere, forcing me to jump on my brakes? I'm so glad to hear the new campaign about cautioning motorcyclists in Israel. Last year when I was in Emergency, the humdrum schedule was broken around ten o'clock after a series of young men were carried in on immobilizing stretchers and the head doctor came through the ward calling, "Okay - motorcyclists strip down to your shorts!" It was like a routine with them, the rush of messengers in the morning, and then, as I've been told since, the food deliveries in the evening. Well, that stops on Yom Kippur because the traffic does, and then all you get are the bicycle accidents.

A final note on Leonard Cohen: If you pray on Rosh Hashana and Yom Kippur you could not fail to identify "Venatana Tokef" the repeated reminder of the day of judgement, which includes the very poetic lines "who by fire." They are a reminder of the tentativeness of the future and the helplessness of the individual in the face of their fate. Cohen's addition of the standard "Who shall I say is calling?" in this context alters the concept of the prayer. The question of the identity of the one who decides adds a sense of uncertainty to a litany which otherwise puts the individual in the hands of a clear and powerful divinity. That reflection of the modern dilemma makes all the difference.

For a little glimpse into the past you might want to look at these photographs from Life Magazine from 1948. And if you want to go to prayers but can't bring yourself there, go to the internet services