In case you missed it, I've been trying to get someone to write a customer review on Amazon for So Far, So Good. (You can read the reviews So Far, So Good here, ) and feedback is appreciated, even if i don't say anything about how appr eciative i am. It's part of a little private campaign to get up the energy and conviction to do another book after the marketing fiasco of the last one.

I'm still overwhelmed by the decision not to prosecute the killers of the 13 Arab demonstrators at the beginning of the Intifada. My father's outrage cries out. Even the many extenuating circumstances - the sudden outburst of terror that scarred all of israel for life, the lack of experience, the misinformation - don't justify the actions, and certainly nothing can justify the failure to investigate the crime properly. Shimon Shamir (from the original investigating committee) has been complaining that the evidence was ignored, and is outraged.

Thank goodness my kids aren't going to Sinai this year. It is one of their favorite places and it is crawling - they say - with El Kaida. But there is such a need to escape - that I understand the way people face innumerable dangers just to get out for a while. The holidays next month are so vacation intensive that many people are going off for all of October. I myself am going off to a conference and study for a few weeks. It's pretty wild. What I would like to do is explore this country, learn more about it - but it will be too crowded with vacationers to enjoy. Or maybe it is that I will be too crowded with conflicting emotions with every exploration. Everything here is too meaningful. San Diego, on the other hand, looks like it will be meaningless - and that's what I need.

I want to thank Carol publically for noting that "So Far, So Good" is hard to get in Tel Aviv. Just because of her I took myself away from work and went to visit Ruti at Bestsellers Books, in the Commercial Center of Kfar Shmaryahu. Wound up picking up all the presents I need - and left a few things in the store I really wanted, like the poetry calendar, and some of the wooden toys, and a nice collection of Hebrew books in English translation that I would have liked to shlep to my friends in the States but both of us have bad backs...

Any way, there are books of mine there. There's also Helen Motro's book, and Natan Yonatan's book in English...

Now here's an important link for you - if you know hebrew and go to a party in Israel. It's a computerized calculation of how much money you need to give as a gift. Since we usually wind up going to at least a wedding a month, and nobody wants presents any more, this is a relief. You know that moment you are standing at the door, with the card in your hand, and the invitation (so you remember the new names of the couple)and you suddenly are frozen by the question "How much?"

And since I'm being frivolous (still to avoid working) here's a photo of me and kurt gerron. Gilia and Limor took real pictures that probably look much better, but they are professionals so they're not ready. 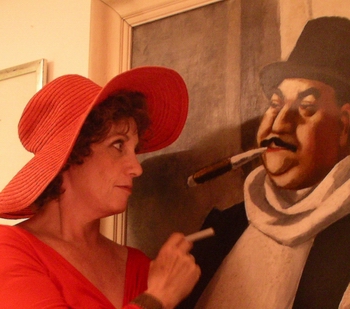 So I found myself in wedding dress country. dizengoff has one bride's dress after another - the same principle of dress as in Dalit El Karmel - puffy, tight-waisted crinolines.

i was in the neighborhood for a jerusalem review meeting that got delayed so i wound up observing the coming of hte shabbat int its various manifestations. the ladies with shopping bags (what bargains! really!) the man in a black suit and forelocks hurrying home to the sabbath on roller blades, the couples coming to cool down after a hectic day with coffee and cake.

Boy do i love tel aviv. Embarassing but true. We were opposite the great synagogue today, the one that Ezi's grandfather built. Here's a picture from way back then. You can blow the picture up to read the sign on the top of the long wall of you like to see Arpad Gut's name. 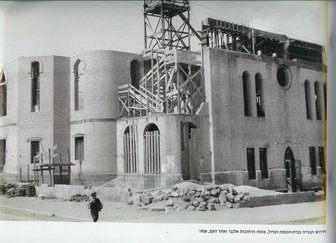 We went for lunch at that great steak place, Stefan Braun, but the graffitti on the synagogue wall said "Meat=Murder" so I had fish.

And in the middle of this placid weather we kept returning to CNN to watch Rita. And the world is so small and connected -There was that beautiful antebellum house we stayed at in Natchez -there was that street we walked down in New Orleans - the people interviewed seemed so familiar. And then we look outside, and we're in a different world - where we don't get in a year what they're getting in an hour!

But the big question is - how are we going to get a 'mutuality' going in Gaza? The poor people of Sderot are terrified of the rockets raining down on their town. The rockets are "in reponse" to the explosion a few days ago in Gaza that was pretty clearly a "work accident" (local bomb factory mistake). This does not speak well for peace.

How can I leave the country when the Likkud is in such disarray? What a mess the party meeting was! What a mess we are all in! People are playing high school tricks on each other, preventing Sharon from speaking by shorting the speakers! Not that Sharon had anything special to say - except maybe "Hey guys, let's live in the real world for a change." And targetting Hamas people in the meantime.

If I believed in reading over what I wrote, I'd probably read this and think I've gone off the deep end with all those expletives and those short uninformative evocative sentences - but that's the way the whole Likkud meeting looked to me!!!