Over and over we read the Kol Nidre and over and over I was convinced I knew from within the prayer. First, the way we begin by acknowledging permission to pray with sinners - I'm crazy over the way the sinners could be others or it could be me. Or both. I love it. Because it doesn't really matter - like we're all allowed and we're praying as a group for each other's sins. And we have a collective responsibility. Whether I voted for the creep or not, I am part of what he does. (whichever creep he is.) People as one before God.

And having said that, I didn't go to shul. Maybe next year I'll find someone to go with and find a way to get tickets and all that, but I'm still into the idea that I'm part of a community, and must join it altogether. So if the family will not go, I should be with them. I usually pray with Ezi. But it isn't a service, it's a reading and discussion. And I'm not allowed to fast, not with my bumpy health.

We went to the movies tonight - not too many people were there - it's rare - hard to get tickets on Saturday night. What Maisie Knew. not really appropriate for this weekend. Ha.

Thin Lips is an album I did almost 10 years ago. I suddenly remembered it and how much I like a lot of it. Thin Lips is here!. Let me know if you listen to it and love it.

Last week I walked Tamar in her carriage and thought if I could only shlep her up four flights of stairs I'd take her to visit Riva Rubin. I was sure Riva would love to see a baby after her confinement at home. Today Riva was buried in Givat Brenner cemetery and I was overcome with sadness that I couldn't have brought her the baby in those last days. Riva was the queen of English poetry in Israel. Not only because she was a wonderful writer, but also because she struggled for many years to make English poetry relevant to the country and to help make the country relevant to the world.

Here is an article from Esra about our last celebration together 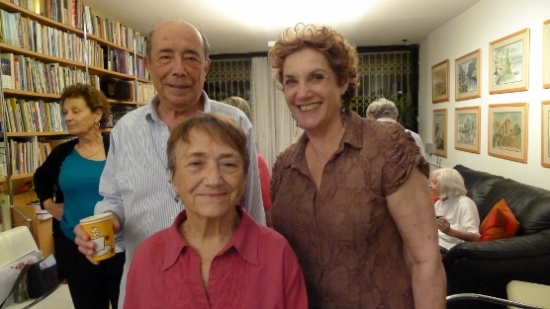 Ezi took the photo of Dick Sherwin, Riva and me at the party at our place (the mag forgot to give him credit).

I will miss her

Why don't i say something about how bad gas is? Shhhh. we make our own. But we havent donne anything with it for ever.

We are planning to travel to Bston on three weeks for three weeks. This is the time - If you are planning parties and reading - book me . I can talk about W.E.Henleys hospital poems, and maybe talk about the wife of bath's ways of looking at her personal treasure. and you might even interested in my poetry.....

I can go anywhere in the area, a i work cheap.

I didn't expect much - the last time we went to the Gesher Theater we weren't thrilled - but tonight we found ourselves there for a Hanoch Levine play of "Yakish and Pupcha" a wonderfully slapstick production with lots of good jokes about a matched couple who cannot consummate their marriage because the groom is made impotent by the ugliness of the bride. The ugliness of life is the romantic Russian element. The amazing agility and great timing of much of the actors make the kind of silly plot riveting. Impotence, to continue the thread of the play, is not riveting.

If everyone else has left the country, why is the traffic so heavy? Why are there such lines in the supermarket? Even our little grocer was shocked this afternoon - all my neighbors were there, horrified at the thought of 5 days without stocking up. Even though the shop will be open in the morning of Friday. I really thought we were the only ones left in the neighborhood from what the taxi driver told me yesterday - he said his income has been cut in half in these holidays.