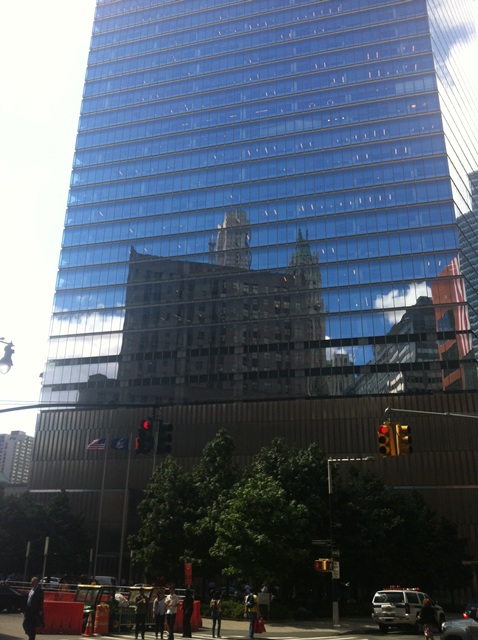 To be in NY on this terrifying anniversary is indeed dramatic. No matter what buildings come up they will never erase the memory.

The memorial museum is of course nowhere near ready.Too many petty internal divisions,

But there are other memories there. 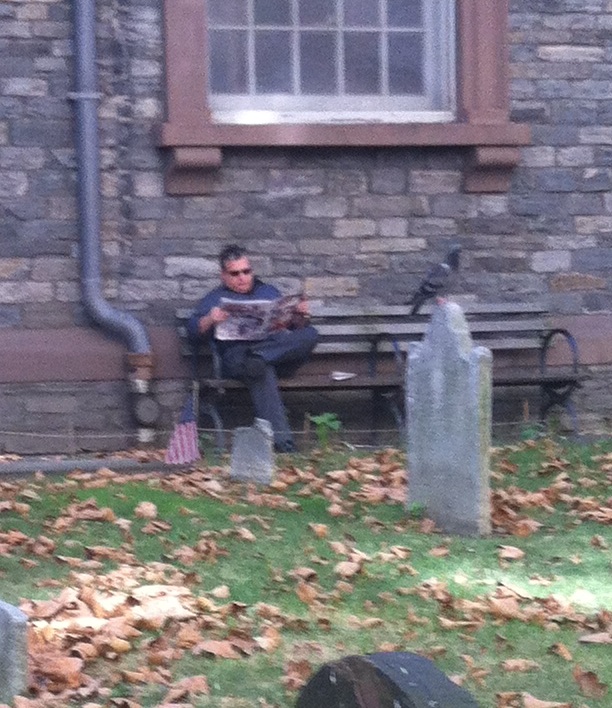 This picture in the cemetery of St. Paul's seemed to embody all my feelings about the place.

How the world has changed since September 11, 2001. How the concept of democracy has changed since then. When it happened I wrote a poem about how the statue of liberty saw the attack, and how the effects will be hard to erase. She says:

And you have to admit, the US is a pretty amazing country and deserves better.

Sometime when I have time I'll tell you about my recent experiences here.

Today, while we were buying a backpack in Century 21 (I think the last time I'll be going there - I'm too old to shop like that), someone suddenly said to us "you don't want that one - it's not enough support for your back" and I answered him and we discussed this back and forth for a while before I realized we were speaking in Hebrew. It was a wonderful homey feeling - even though we'll probably never meet again.

Today marks the day of Kurt Gerron's completion of his film "The Fuhrer Builds a City to the Jews" Ha'Aretz commemorates this day.

White House declines Netanyahu request to meet with Obama.This is not good news for me. I was just complaining about the fact that Obama hasn't been to Israel since his previous presidential campaign. The White House claims it's a scheduling conflict, but it would make a huge difference to me, and to my insomnia, if those two men talked. Of course Obama is in a delicate position and if he meets Bibi and someone says something inappropriate it might hurt his campaign. Nevertheless, it behooves Obama to behave in a civilized and friendly manner.

After we went to sleep last night the whole story about the US Embassy in Lybia broke out - Obama apologized for an insignificant film he had nothing to do with and as far as I can understand was privately funded. If I am not mistaken this attack was set up in advance by the same organization that surprised us eleven years ago, Al Keida, and the film was just a stupid excuse. As far as I'm concerned, Sam Bacile is an imbecile if he exists at all. I'd be surprised if there isn't a more complex story behind the strange spate of anti-islam films. They are just too simple and naive to actually be meant to operate as active criticism.

The Jewish Museum will be opening an exhibit of manuscripts from the Bodleian Library tomorrow, and thanks to Ann Birstein we got to see it this evening.here Just to see the handwriting of Maimonides and Rashi is enough, but to be in an exhibition entitled Crossing Borders on this day of such great religious unrest and misunderstanding is amazing. Hebrew, Arabic and Latin borrow from each other freely, and the dialogue is often greater on these medieval pages than in our lives.

As we were walking home we passed the Guggenheim where Lady Gaga was presiding. It seemed that the vast amounts of resources invested in Lady Gaga's commercial enterprises were in no proportion to the events in the news or even the quiet exhibit in the Jewish Museum.