I wish I had been in Mrar last night to welcome Riad Ali (the CNN journalist)as he returned from 2 days of being kidnapped in Gaza. It was an all-night party! Mrar in general is a pretty fascinating place. Two of our major poets come from the same village - Salman Masalcha and Naim Araidi, and yet it is small enough so that when I drove in a few years ago and asked where the house of Naim Araidi is, a little boy on the street said, "Ahh the poet" and directed me.

Anyone who has ever sat in a sukkah in Israel know that there is always dew, if not rain. Sukkot always seems to mark the beginning of the 'autumn' such as we know it here. You start praying for dew and it comes.

So tonight was so damp we could feel every injury to every bone we've ever incurred. It's a bit less immediate than usual with the permanent 'schach' that seems to have come into fashion lately - Instead of the branches that let you see the sky, there is a kind of wooden planking - ribs of wood tied together - that must be kosher, because it is so popular, but feels somehow too permanent and proper.

Sukkot - Today was the third time this week that I've heard a similar stories from friends. Scholars and artists tell me in visits to Europe they encounter people who refuse to talk with them because they are Israeli. They say they are not antisemitic, but can't have dealings with people who are connected with the racist state.

The first time I remember encountering anything like antisemitism was in high school when Iwent to a country club reception to meet some guests from a fraternity at Brown. At some point I found myself asking one of the guests about his fraternity, and he explained that it was 'of course' restricted. 'to what?' i asked, and he explained, 'no blacks, no jews..' 'Some of my best friends are jews...' i said, ' my mother, my father...' I wasn't surprised that he disappeared, and it took me a few minutes to realize that he had no reason to suspect in advance that i was jewish since the club i accidentally found myself in, the Rochester Country Club, was also restricted. And I was pretty used to that scene

But it was the first anti-Israeli attitude that disturbed me. While I was living in Syosset, I was researching a biography of Adelaide Crapsey and discovered a woman in nearby Garden City whose father had known her. I had told her I was a scholar from Israel and she appeared very friendly. I visited her twice and she suggested that I was triggering her memory and she might have a letter or two that might be useful to the book. But the third time I came to her mansion her husband was waiting at the door. He wanted to show me a new CD - and he played the Der Ring des Nibelungen for me. 'Do you know who wrote this?' he said. 'This was a man who knew what to do with people like you.' I left without seeing the wife.

The streets seemed deserted today. I parked on ibn gvirol street and there were almost no other cars there. people seem to be on the road - any where but home - what a contradiction when the holiday is about establishing residence.

We spend the evening avoiding politics - to me it is such a helpless topic - there simply ARE no leaders, no solutions, and most of the people seem content with Arik Sharon, to the extent that there is nothing to discuss.

I was trying to convince Oren to go into politics, but he claimed there was no way in. "Find a leader and follow him," I said. His face went blank. "who." "Yom Tov Samya"

Former Head of the IDF’s Southern Command,Samia is perfectly placed to go into government, but he's polite.

So he'll never make it.

Here's a flyer in case you decide to come next week.

With all the shelling and killing this holiday I don't have much of a heart for this frivolity, but what can I do?

Innure myself and go on?

For the past two weeks I've been wanting to write about Vicky Knafo. Last year her walk to Jerusalem to protest the government's treatment of unemployed single mothers was somewhat understood and even though the minister of finance, Bibi, refused to see her, she influenced our entire consciousness and her name became an icon for the disenfranchised. So when she decided to appear on a porno site, breasts exposed, with the words "They've milked me" on her chest, her action aroused a great deal of interest. But most of the responses were negative. Even though the site is a paying one, so few people actually saw her, there were hundreds of negative comments. My own take on it is that she is an amazing symbolist, and what is being done to the lower-middle classes and the lower classes here IS pornography.

Here's the site Viki Knafo - and she's tattooed, not painted. What a woman!

I don't know yet any more about what is going on in Gaza than you do. I can only echo Uri Aveneri who wrote yesterday: The talk about "unilateral" disengagement must stop. We are not living in a vacuum. No disengagement is possible without negotiations and agreement. Therefore a dialogue with the Palestinian Authority on the withdrawal from the Gaza Strip must start immediately. There can be no disengagement "under fire". A cease-fire must be attained. The Egyptians have proposed it. They assert that they are able to achieve it. Ariel Sharon has rejected this categorically.

And beyond all this - a real peace process for a permanent solution must be started at long last.

It is the only possible solution, even though it's dangerous for all.

But since I can't change the situation out there I'm going to keep focussing on my own life. Like yesterday, when I had to go to the Ramat Aviv mall, I found myself waiting in line before the security waiting line to "bench" on lulav and etrog. Except for the incredibly delicate machinations to avoid physical contact with me, the procedure was totally standard, cut and dried, and yet my eyes filled with tears. The "yeshiva bocher" was taken aback by my quiet outburst, and yet a minute later I was checking out the wall of Comme-il-faut that sports my belt poem (see poems and scroll down - it's the marquee) in big letters. And a minute after that I got into step with the wall-to-wall shoppers and barely managed to keep myself from increasing my overdraft by another thousand shekel (a simple lace top). I am always overwhelmed by the number of people in the malls spending more than the equivalent of my monthly salary on a dress and a pair of shoes.

In contrast to that scene, we spent the morning walking around the neighborhood of Shuk Hacarmel, which may be becoming gentrified, but still shows incredible poverty and beautiful scenes. Ezi took some great pictures. 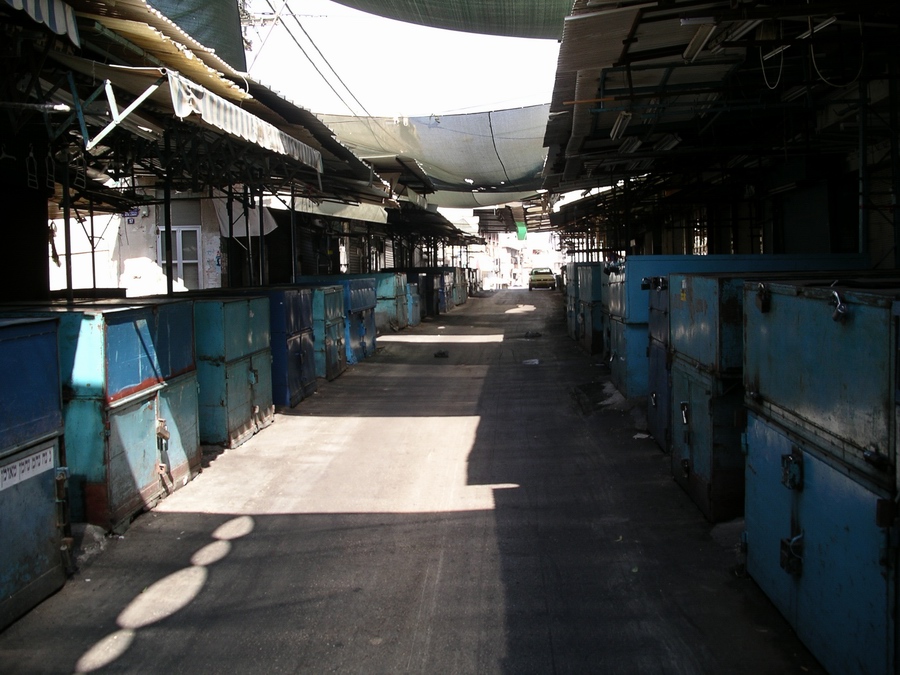 He also photographed another Comme-il-faut shop with another poem displayed magnificently. 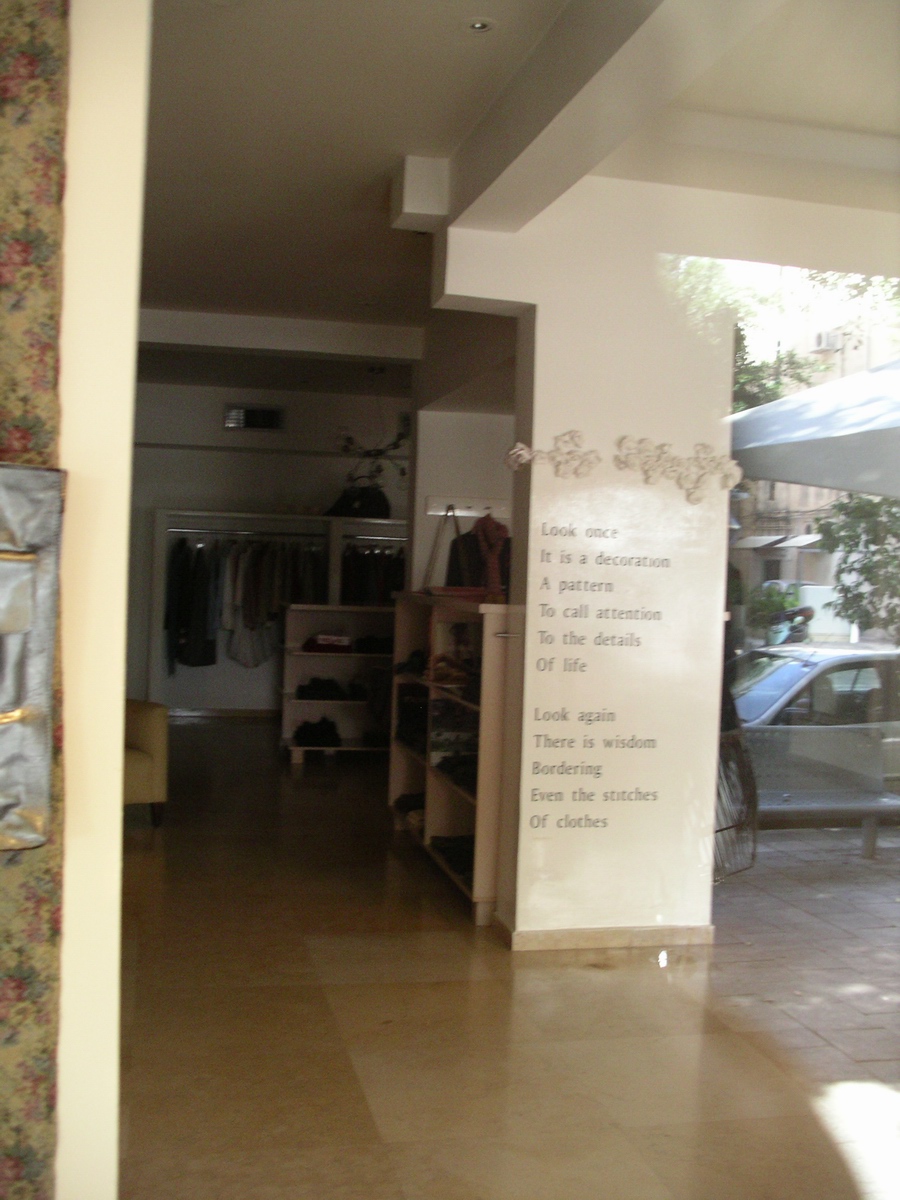 What interests me is the way in which the words reflect the concept that is manifested in the poem half showing the inside of the shop and half reflecting the street. the "look once - look again" idea works better on the street than on the page.

And this is the flyer for the next show. It was designed by Michal Yarkoni.

Haifa is hosting Palestinian in its art festival this week. This is the first time in a long time we've been able to open a dialogue here, and I'm hoping it works.

Dialogue is what is missing in this whole operation in Gaza. I can't argue with the need to stop the rockets killing babies here - and don't know how exactly it has to be done - but it means nothing without dialogue, without what Yom Tov Samia calls "Political creativity."

The suffering of the people of Gaza is not spared the Israeli populace. We hear about it all the time, and some of us don't really care. Most of us suffer with these people. Last night I dreamt of an orchard I visited many years ago in Gaza. It was walled in and it seemed to me like a little paradise, but in my dream it was blown up and I woke in a sweat.