The holidays seem endless - there is heavy shelling from Gaza and very little news, fewer connections to the real world. We share these days with those we love, but know little of what else is happening. The papers come on some days, the news on television appears unprofessional and brief, The internet is partial, and has to be searched. Thank goodness tomorrow becomes 'normal' and we'll have a chance to update and repair.

Yesteday for example we managed to reach the computer factory to ask if my computer is repaired. "Already you're asking?" the guy said. "Two weeks business days!" We went to get glasses on the half day the shops were open yesterday and the optician was falling apart. "I have to be here when there is a chance to open to store," he said, "but on the days off, I can't manage to go anywhere with my family." The Chabad on the other hand were singing in the streets yesterday for erev Simchat Torah, and have none of the impatience we have.

And indeed there were celebrations all over Tel Aviv over the Torah. We walked into one on Ben Gurion Boulevard and Arlozov - two streets named after two zionists who were probably turning in their graves at that very moment. We walked with the parade until we got to Rabin Square, where there was another joyous and vocal celebration. 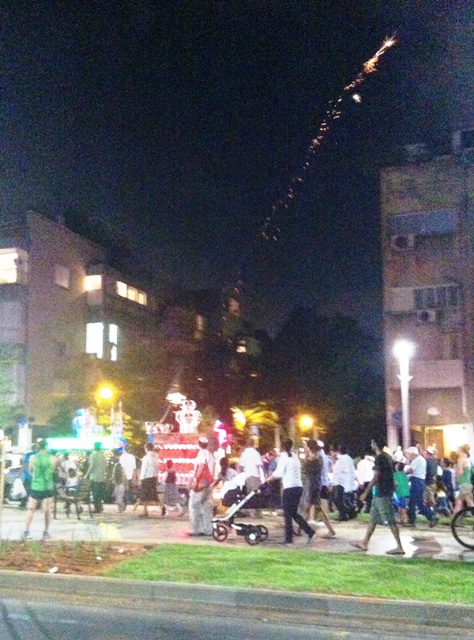 We were all having such a great time dancing down the avenue to the music that we didn't notice that the men were walking in front and the women were following behind. We seemed to forget that these joyous people are the ones responsible for the imperative of religious weddings in Israel and prejudicial divorces.

The library has a project of recording local poets and putting them on their site. Today was my turn to do a little shtik there. What a wonderful shock to discover they have a real professional team and are really actually putting the videos on line! The index is here but of course it is only in Hebrew. I snuck in an English poem and the director translated it on the spot. I'll bet we hear something about its foreign influence and I get censored. After all, the whole idea is to preserve and develop the Hebrew language and culture...

It was also a shock to see how full the library was. People reading books. The library at the university is almost empty.

Ronen Shapira has done it again. He put "Stray Dog" to music and onto Youtube

A little review of the Jerusalem Review appeared in Esra Magazine.I have been working hard on this journal for many years - and the hardest part is getting funding. It is only one of many literary endeavors in which I've been involved that is underfunded, but it is the one that has had the most contretemps of them all, and it is amazing that it is out.

Late last night Ezi managed to install all the programs in my newly repaired computer and although i still have lost most of the important mail, I'm theoretically back in business. Again, if you wrote me and i didn't answer, it's lost. write me again.

I may have been off a day or two on the elections, but we'll see. Here's another prediction. I believe a major factor in Israeli elections will be the result of the American elections. If Romney wins it will strengthen Bibi's mojo immensely. An Iranian revolution that leads in the direction of democracy will weaken it.

Of course our government is not the center of the universe, but you wouldn't know that from the way we talk. On the other hand, take a look at Israel Harel's op-edabout how we constantly beat ourselves over the head over the Yom Kippur war when actually we won.