Have faith friends, I'll figure out how to write on this funny system, and promise you reviews of subways in new york, david mamet's "romance" and more about terrorism and stuff.

Nope. This is too hard. Look for me next Sunday.

We actually watched the Columbus Day Parade. It was mostly Italian, and very proud. I was proud too. Of N.Y. Of the Italians, with whom I grew up. But where were the Jews? After all, as far as I know, Columbus was Jewish too. Like minded people say so as well.

When I ask my friends in NY about this, they draw a blank. We have enough trouble. But still, how much harm can there be in acknowledging him - his story seems typically jewish to me.

But who am I to talk. I can't even get in to the idea of Yom Kippur in NY. I make no plans, but wonder about whether we can get ourselves into a synagogue.

For some good things to think about tomorrow, see the Jbooks sites. There is also a stunning interview with Hugh Nissenson, a writer I've always admired, whose Days of Awe is just out.

And now for a story. The rabbi is taking a walk from the synagogue in the middle of the day on Yom Kippur when he spots his Shamash stepping into a chinese restaurant. He peeks through the window in horror and watches as the man orders dinner, gets served shrimp and pork, eats it, pays, and walks out. "What have you done?" The rabbi confronts him on the street. "I saw you!" "Ah," he answers, "You saw me going into the restaurant?" "YES!" "You saw me ordering the meal?" "YES!" "You saw me eating pork and shrimp?" "YES!" "You saw me handling money, paying for it?" "YES!" "So, what do you want? It was all under rabbinical supervision!"

We're going out to a persian kosher restaurant now to meet my nieces. A pre-break-fast meal.

Being in the diaspora gives me a strong need for religion. why? because what would the goyyim think?

And in Tel Aviv there is hamsin, people on the streets in white - in NY a rainstorm, people off the streets - it is cold, dammit. 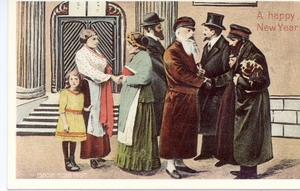