Where else in the world would the president of a nation speak at the funeral of a comedian/actor? Yisrael Poliakoff, Poli, was very important to all of us, but i think that the phenomenon of Peres is just beyond all belief.

More and more I hear the Arab population worrying that they will be disengaged from this country, that the land will be divided between Israel and Palestine and they will find themselves in the same place but under an entirely different government. The Arab parliament members have talked about their fear that the law that was recently proposed, declaring it illegal for a member of parliament to visit an enemy country without permission, is seen as a step in the direction of excluding them entirely from the government. Although in many ways this proposal seems perfectly logical, the context is problematic.

Last night we were walking down Najara Street. We were showing an American friend how to get to Pappa's from Allenby Street and a man suddenly came up and said to me, "Do you know who Najara was? He wrote Adom Olam (the most universally popular hymn in the Sabbath prayers)." The street itself reminds me of what Hobbes said about life outside of society - solitary, poor, nasty, brutish and short. But the history, the history!

Yes, it was Moldavi on Lior Shlein last night. You can see it if you click on his picture on Nana. No, you have to write ÓŚž„ŗŠť in the search box.

I KNOW, i should be writing about issues and/or events. About getting the olive harvest in and renewal of values and the events at Pekein. But you can read about that anywhere.

I'll just saysomething about the student poetry reading that took place yesterday afternoon at the university. Students, teachers, every one was having fun. 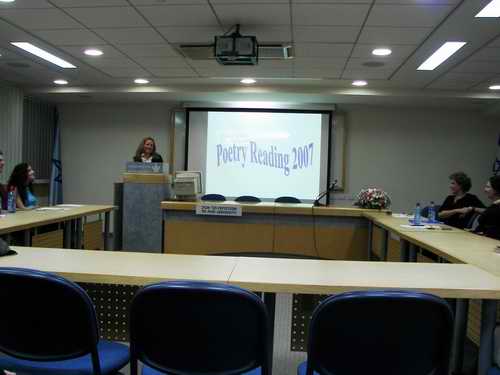 I know there's a lesson here for the ministry of education, the hunger for learning, the joy in learning, the need for targeted funds, etc. But we were fortunate to have an interested donor, who encouraged this and other poetic activities. 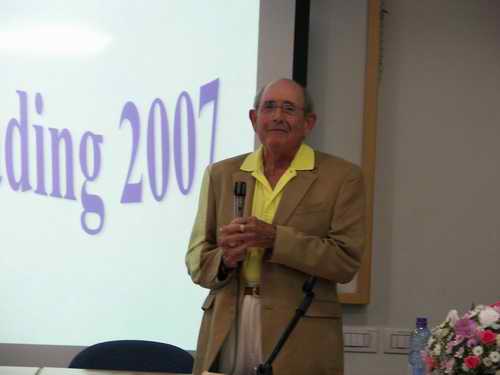 And now the strike is going to widen because no one is talking to the academic staff seriously. That's pretty awful. Here's a thought: if the government treats the Arab leaders at the peace talks with the same seriousness as it treats us, there's going to be a war soon.

This evening I was more engrossed in what I could have done with Ezi's cellphone than I was with where the heritage of Rabin went. It was not just a question of the kind of guilt-assuaging and conscience-comforting that I thought has been developing this year over the extended mourning ceremonies, and the terrible disgust with the fact the despised Yigal Amir will be celebrating the circumcision of his son on the anniversay of the day he murdered Rabin. I really don't know what I did with that phone. And it's on silent so I can't find it by calling the number. I was listening to the ceremonies on the car radio and talking to Oren and then... well after that it's all a blur.

To all those of you who are worried about the decline of my memory facilities, I've always been like this. And the phone was in place in the car where it should have been.

The last time I was at the Rabbinate (other than Ronen's wedding and that was in the hall at the side), I was getting divorced, and it was a sad, lonely and dingy place. Today I was just a witness and the whole thing took only a little over an hour. Everything is computerized except for the 'get' that has to be written out by hand. And there were lots of chatty couples all hoping for some good advice and encouragement from we 'advanced persons.' The bathroom wasn't repulsive and there was a guy selling coffee and sandwiches. When he saw I was wounded (more about that later) he brought the coffee upstairs to the room we were waiting at.

(Yup, in the morning, I fell off my bouncy ball and almost ripped my ear off against the wall. I just used a head scarf as a compression bandage after an hour of ice, and after Ezi put iodine on it, but I've still got a... got a... got a... don't worry I'll be all right for the Hanoch Levin play tomorrow night.)

To return to the Rabbinate. When I was there in 1979, I had to dress 'tsnies,' modestly, in skirt and sleeves. Today not only were most of the women in tight jeans, but the one that particularly impressed me, came leaping out of the courtroom shouting "whoopie!" and "shehechiyanu!"

May the child circumcised in prison today grow up to be a perfectly ordinary obedient citizen.