Ah, the days fly by when you're having fun. A rocket here, a strike there, and we're off again on the slippery slope of defence. We revisited our shelter the other day and everything looks in order, the chemical toilet, the filter for gas, the water supply. The only problem is the ladders we won't be able to climb to get out of there. We're almost all over 60.

There wasn't much to see on our trip through Jerusalem today. But the stories, the stories, were amazing. We started out at the Jewish Agency building 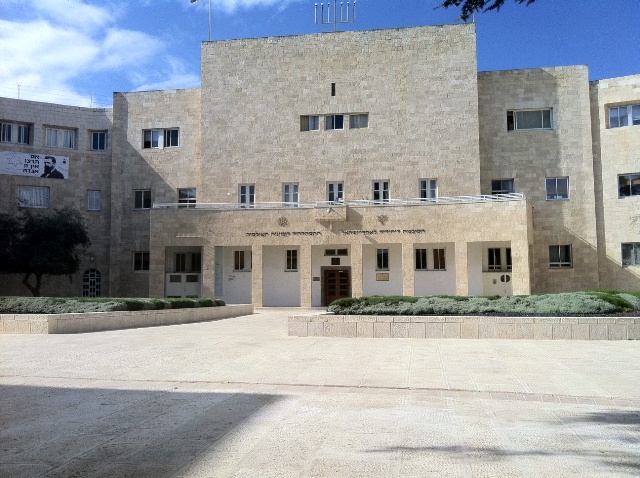 with the amazing Muki Tsur 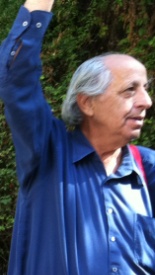 who told us how awful and disgusting Jerusalem was at the beginning of the twentieth century. He began with the widespread prostitution, the desperation and poverty. He gave us passages from newspapers and writers of the time, from notices on the walls and from laws and codicils. 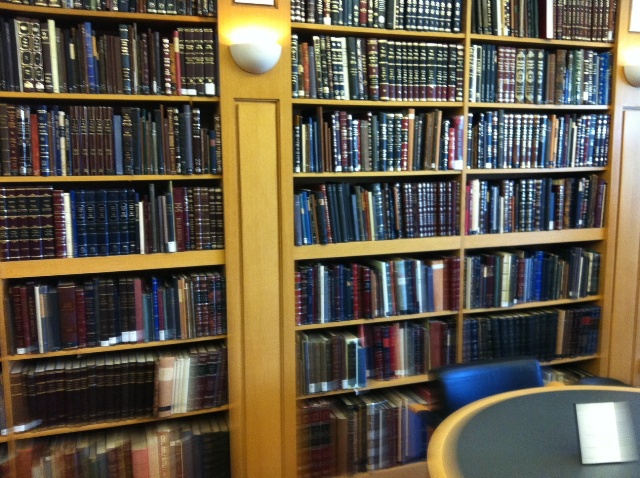 Where we learned of something of the spiritualism and the value of books at the beginnings of this country. 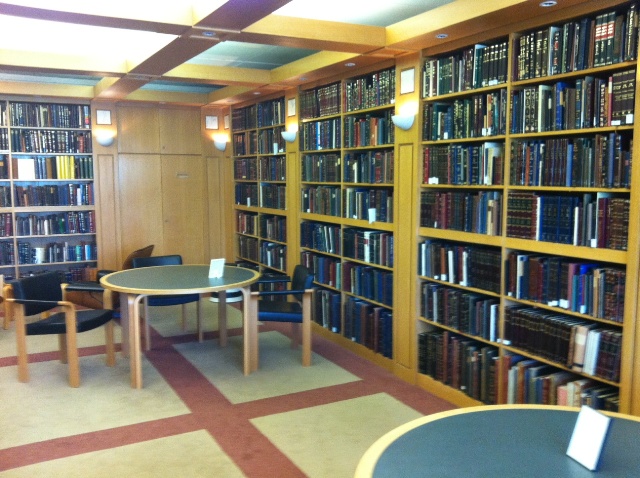 As impressed as I was by the National Library and as nostalgic as I felt and as comfortable as I was on the old Givat Ram campus (it is so people-scaled and democratically oriented), I wasn't prepared for the inspiration I would feel at the last leg of the journey at a new communal settlement on the outskirts of Jerusalem.I'll tell you about that tomorrow.

I had to make some changes to the entry last night because I was falling asleep as I wrote and made some big mistakes. But one change I didn't make was in the messed up sentence about my nostalgia for the old campus of Hebrew University. So here is my naive history of the Givat Ram Campus: I was in Israel in 1965. I had wanted to hitchhike through Europe but for some reason I listened to my parents' veto for a change and compromised by taking a couple of courses at Hebrew University. Forgive me, but except for the entertaining sociologist, Adler, I have no memory of these courses. The experience at Hebrew U was entirely social and romantic for me. I met so many people - of all ages, races, and backgrounds, I was absolutely discombobbled. A guy named Hashim took me on a date in through to the old city, and we had dinner in an Arab restaurant, then went back to the university. Someone named Kuti took me on his motorbike to see "The Fountainhead" and explained the new mentality and the new values of Israelis to me. Fatma took me to meet her sisters. Yair walked me through the valleys around the campus. Naphtali admitted his disappointment with the Israeli dreams, and together with Jamal we discussed politics into the night. There were so many others, people I met on the inviting square of the campus where everyone seemed open and friendly and could lead me into completely different directions. Maybe it was just my personality, but I felt that the campus and the country was open to me, as was the future of the Jews and the Arabs.

I've been back to this campus many times, but this time I wasn't rushing and the memories all came back.

The bus took us up past Kiryat Yovel to an old pre-army school where Muki talked to us about the kibbutzim that in the 20's and thirties were meant to influence the character of Jerusalem - the beauty, agrarianism, and socialism of the ideal Jerusalem and not the ugliness and decadence of the present. They failed. Jerusalem grew to become what it is today. 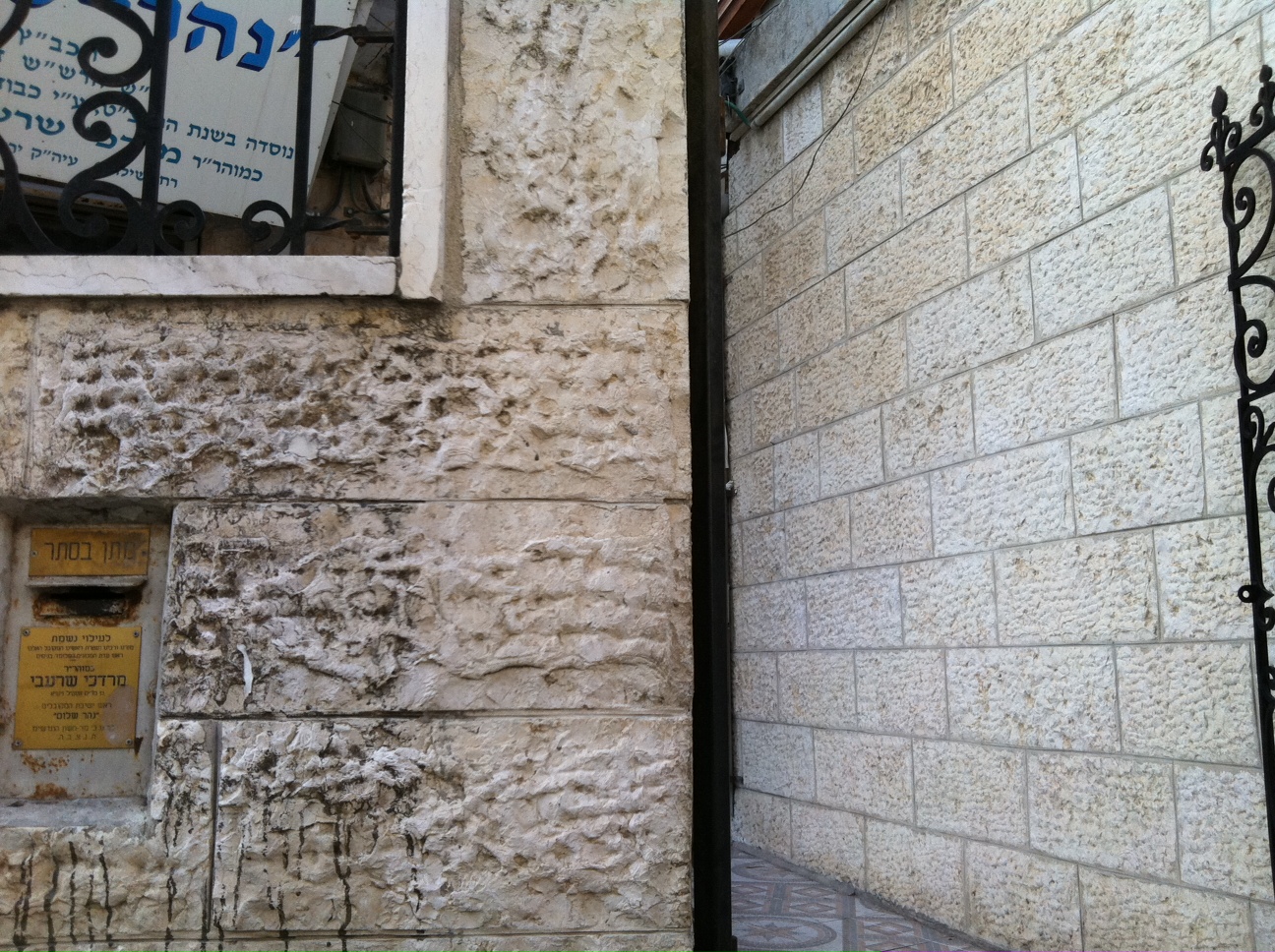 but when you step inside, you read the sign that asks women not to enter. Then I remembered an article i just posted on facebook about extremist religious decisions, in this case: the judgement of a witch

And then, and then, we got introduced to a couple of guys who belong to urban kibbutz groups - families who chose to live nearby each other and devote their spare time to community work. It is the principle of communal responsibility in an urban and individualistic environment. The possibility of expanding these little communities into a national movement overwhelms me, actually makes my heart pound.

But now I must get ready for the demonstration tonight. 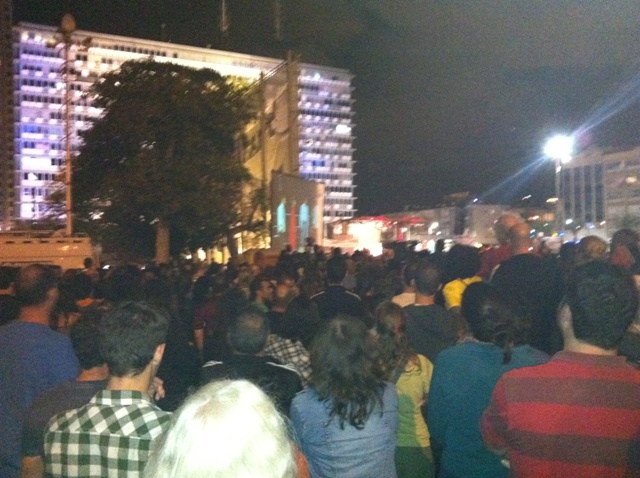 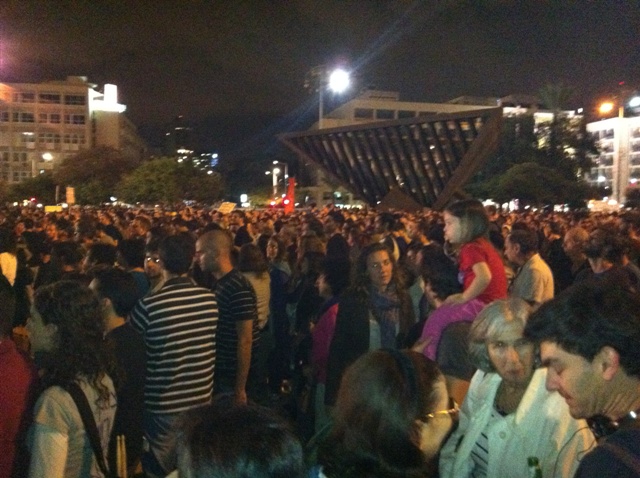 But it isn't the usual. First, a peace demonstration when the grads are falling in the south is already difficult. Second it looked like rain, and the weather was a little too cool. Third, vacation is over - students are back in school. And finally, we have been through enough demonstrations this summer.

And yet, there were tens of thousands in Rabin Square. And our feeling was that finally all the discontents are becoming connected - that all political parties, all races, all economic levels, are finally coming together. Even 20 members of Knesset wrote in support of the movement. Let's see what happens now.

The widespread interest in social change was muted by the dangers of rockets in the south. The rockets continue to fall and our focus is on the danger and terror there. At the same time there were many more people than the press reported. And despite the rain, the dampened spirits, and the lack of glitz, the people were there, serious about change

and ironic at the same time.

We thought we'd made an 'arrangement' but the rockets are still falling. Some people have told me "well this is the bed you've made and now sleep in it" but there are two people who made the bed, and if only one of the left a corner loose, all the bedding gets uncomfortable. And if one kicks in his sleep, the other one wakes up black and blue.

If you can get past the superglitzy ads and can realize that most of this book is paid for with plugs, you'll find this Tel Aviv Mag useful for beginning to know the city.

But the best game in the city this afternoon is the opening session of the Knesset for the season.