Yeshiva Student Stipend: There's a subject I hate dealing with - just because it seems so relatively minor to the general national picture and so little of a personal influence on my life. But it isn't trivial. The fact that we - with our taxes - are ruining the lives of well over 70,000 people who are condemned to live wasted lives, many of whom are pretending to study Gemarra without any serious interest in studying and would be much happier doing something useful. We are ruining the lives of people who actually want to study and can't afford it. We could probably enrich their lives much more if we gradually decreased the stipends and taught them more useful activities. These are often intelligent people whose initiative has been crushed and whose freedom has been taken away. Condemned to relative poverty and an extremely narrow way of life by their reliance upon the stipend that demands connection to a kollel (study hall), they don't have much of an opportunity to choose any other path. Maybe if they were supervised, guided by teachers, evaluated, and tested, I'd pity and despise them less, and I wouldn't begrudge them their pittance even though it comes out of my salary.

I really really hope the students will do something about the lack of support for their education, the lack of support for them. Almost every student here works - often full time - in order to study. Often after three years of army duty, students are hungry to complete their studies and get on with their lives, but often have to stretch out their courses for an additional year because they don't fit into their work schedule. Even many of the Arab students who don't go to the army find it necessary to work. How many times have I arrived at a counter to pay and discovered a student or graduates? They should be at concerts, at plays, at parties, or perhaps actually studying. They certainly deserve to have a youth. That's why I'm particularly fond of donors who give scholarships and fellowships. Of course all donors are nice. 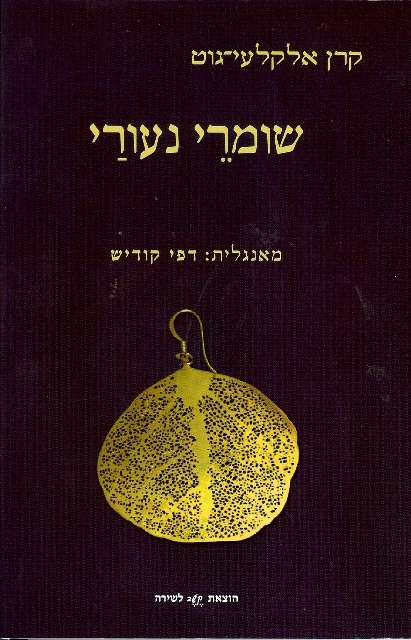 It's fresh from the printers so it may not be in stores yet, or even on the site. So have patience. Or order from me.

We didn't get to Ehud Netzer's funeral yesterday. By the time we found out he had died it was too late. We had been waiting to hear from him about visiting Herod's tomb with him, and then suddenly he was fatally wounded in a fall there. There's a piece in the New York Times today about him, and his discovery of Herod's tomb. We'll go to visit the family as soon as we can. His mother was Ezi's mother's cousin and meant a great deal to her. His mother was also Pua Ben Tovim who taught Kafka Hebrew - I wrote about this a few years ago. He in fact wrote about his mother and Kafka's letters to her in the Jerusalem Review a few years back. He was quite an amazing man and he will be greatly missed in the world.

My plan had been to go to my friend's party and then walk over to Rabin Square to join in the memorial ceremony. But something has been preventing me from getting out of bed for most of the past two days. I hope it passes by tomorrow. And I hope everyone else was healthy and went to the ceremony. It means a great deal.