In the long thunder storm last night, where my dog was shuddering on my pillow with fear, i dreamed the Larissa Trimbobler was passed instructions through their sexual contact to murder another Israel leader. Ha! I said in my sleep. Fooled you! There IS no leader worth murdering.

David Landau wrote about him in Haaretz. I can't yet.

Throughout my diary I remember referring to Robert's site for the facts. I just give an emotional reaction, I'd say, but for a wise and informed opinion, go to Robert, go to Ariga. Now what will I do? Go to his site to leave condolences.

Because I live in the city that never sleeps, I never sleep. It is a chronic and contagious disease. Wherever I go it is crowded. No matter what time of night.

Yesterday evening I found myself in the Sholom Aleichem House for an evening of Itzik Manger. The program was very literary - Manger's most modernist work. The performers were from Hamburg and only the violinist, who did not speak, was Jewish. The two singers were profound and beautiful, but I couldn't find anyone's name so I cannot tell you who they were. But the violinist, the violinist... I kept thinking of a sentence in Yiddish that would translate as follows: from a lad like that you must lock up your daughters.

When I was a child in Rochester New York, my parents were involved in the Yiddish Kultur Council. My mother was in charge for a few years and to my great joy I got to go to the concerts and plays and lectures. I've probably written about this before, because it was always a truly memorable experience. But the audience was almost always critical, remembering the songs from their childhood that were interpreted just a bit differently in the present, comparing the performances to their expectations. The audience last night was no different. "These were not the Manger songs we were expecting -" a few people said to me, "where are the chumash lider, where is the megillah, where is...." And at the same time, they were thrilled and applauded as if there were no tomorrow.

Meanwhile, the night life of Tel Aviv was going on around us - perhaps a bit more frenetically than ever. After all, if the bill goes through Parliament, there will be nothing open after 2 a.m. in the city that never sleeps. Even though I have a stake in the matter, and have always loved the idea of total freedom, I'm not incredibly unhappy about the possibility. Maybe traffic accidents will decrease, as is hoped. Maybe we'll grow up and get serious around here for a change...

This is from the conference on American Aliyah inResearch and Literature that took place on October 25. It was an all-day affair and you can read about it in the papers this weekend. 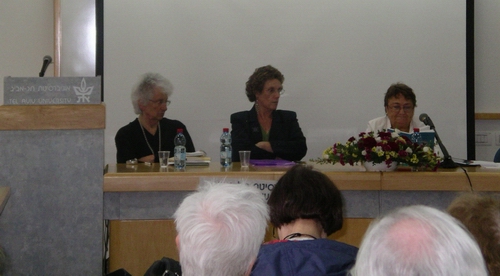 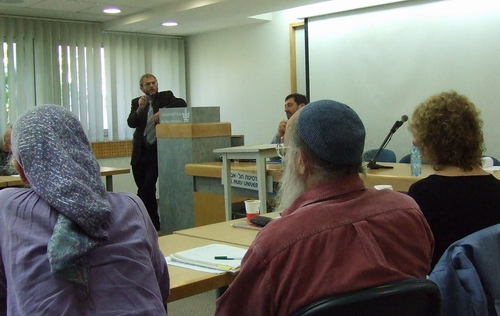 I'm a little under the weather so will wait until tomorrow to write more about it.

Maybe, as some have suggested, the anniversary of Rabin's murder affects the pain in my hip. Maybe the monumental Labor party meeting tonight is also driving a nail into my hip joint. Were I there, I'd be voting for getting out of the government, despite the dangers. I'd be voting with Shelley Yechimovitz and Paz-Pines. Maybe the helplessness and the powerlessness of this gesture is what's hurting.

Today is the 50th anniversary of the Kfar Kassem massacre. Isn't it time for the government to apologize to the people of the village?