Erev shabbat. A fine day to do chores. But I started out at the grocers' where all the guys are sitting out in front drinking coffee and talking about the bike trails they are going to explore later. It ruined my desire to do anything but dream.

In case I haven't mentioned it, my book on Adelaide Crapsey has been reissued and can be viewed on Amazon. There are other books of mine there as well.

Yes I'm busy trying to write other things, to catch up on my enormous backlog, so I'm cutting down on observations about Tel Aviv. But today we went through the old decrepit streets of the city, a few of us who hadn't been on Allenby or Ben Yehuda for half a century, "This is where Genye's store used to be!' "This used to house Pil shoes!" They began with great enthusiasm, but then they started looking at the present - the peeling walls, the shredded louvre doors, and panelling - and they began to run through the old laws that screwed up Tel Aviv. The protected tenant law was the worst culprit, since the rent never covered maintenance, and the municipal regulations - understanding that - never made any demands on owners. "But now it's different," I said, "there are almost no rent-controlled places left." "So we can change the laws, but we have to get out of the old mentality too." So true. People are beginning to renew old buildings, but the general feeling is that it is up to the individuals. If I ever get into the municipality through the animal welfare party, I'll make sure this will be looked into.

The rain came down for five minutes and cleaned the streets. A few hours later there were another five minutes. When did we stop saving rain water? Why don't we have rain barrels any more? Wasn't that the best water ever for washing your clothes? Aren't we desperate for water?

So Bibi's already getting new suits fitted for his new job. Why am I nauseous?

I do like Tsipi, but I don't dare believe she'll make it.

Why as were were sitting in "Segev's" this evening the Prince of Qiatar was on the second floor? Does this augur well?

Here's a secret: Gave the dog a sleeping pill so I can make it through the night without her hysterics about the thunder. Better her than me - I haven't been able to sleep for nights because she's scratching at the bed.

Well it worked. She didn't sleep because of the rain and kept scratching, but I was so zonked out I didn't react. I'll give her another pill tonight.

Amazing, it just rained now, for two minutes, and they promise rain tomorrow for Esra's big fair at shfaim where we will be selling arcs. Esra is the English-speaking volunteer organization.

And while I'm doing announcements here are some more: 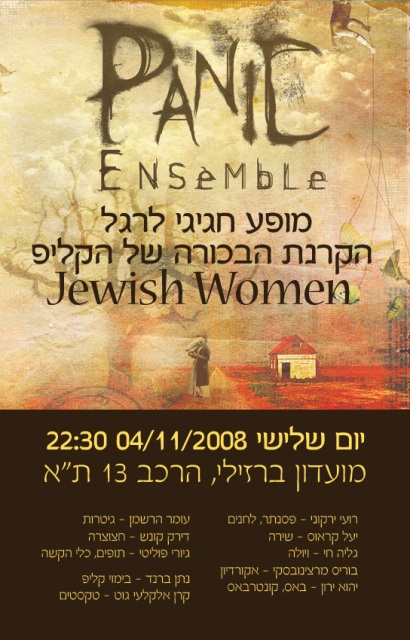 This is the inauguration of the videoclip of the song "Jewish Women," which becomes in this interpretation, a strident feminist statement. November 4, Brazilai.The time is actually 9:30 p.m.

You may also know that there is no assurance of anything right now at the university because the universities may be closed. For some reason the government won't give the schools the moneys they've been withholding for years and now the universities are pretty well bankrupt. Students demonstrating today closed the number one road in the country.

The rain today raised the level of the kinneret by something like 2 centimeters and chilled me to the bone. The day before I was walking areound in a t-shirt and today I would have liked to have gloves and scarves with me as I put on a winterish coat. I started the day - after the usual chores - at the Esra fair, with the books of the Israel Association of Writers in English. Maybe it was the corner we were placed in, maybe it was the rain, but the only people who reached our table were pretty ancient and not into actually reading. Maybe it changed later on in the day but I had to leave in order to make it to my gastroscopy. It was about two, and I ran through the muddy parking lot to my car in the rain, making it in time to pick up Ezi and go to the clinic in my muddy boots. If I had known we were going to have to wait, I would have taken the time to change, but I thought that since it was private, it would be on time. Anyway, it also turned out that I would not have to remove any of my clothes, so I had to hop up on the table with my boots on. Total anesthesia, The muddy boots waited for me when I woke up.

Fortunately, they are comfortable.