Sometimes I am embarrassed to write about a place I just discovered because I should have known about it years ago. The "Schechter Congregation is a conservative synagogue in Neve Tsedek. We went there last night for a bar mitzvah at evening prayers, and I was overwhelmed by its charm. The relaxed atmosphere of acceptance together with the insistence on understanding tradition and practicing it was very effective. The combination of sephardic prayers and a conservative tradition makes for a pleasant and moving experience.

I was particularly impressed by the Rabbi, who has much to teach in a modest and egalitarian way. The evening concluded with Havdalah, which began with the bar mitzvah boy going out with the rabbi to check if 3 stars had appeared, and picking up some herbs and spices on the way back for the ceremony.

And today we were back in Neve Tsedek, meeting some Danish friends for lunch. i would have loved to walk around but we are a bit rushed. it is the perfect day for walking around Tel Aviv though. The weather is just warm enough for shirtsleeves, but not hot. I hope it is this way on Tuesday when we hit the Shvil Yisrael again.

Newsflash. Ezi will be on his own tomorrow. I will be accompanying my daughter to a medical procedure. This is problematic primarily because I will be leaving Ezi alone with a bevy of single ladies his age who are always on the prowl. Otherwise I don't feel terrible about missing this trip - yet.

The opening session of Knesset was less disheartening than I feared. Our president is doing the best he can to counter the smell of corruption that wafts over from Jerusalem. The proposal to create a law preventing prosecution of a prime minister in office is so clearly made to keep Bibi safe, and Rivlin's opposition to it is so necessary. I even wanted to see the news tonight, even though i was exhausted from all the last-minutes changes in my program.

We talked about "Stone Mattress" in class today and I realized almost everyone was holding in a story about sexual harrassment. It was a total #me too moment.

So I didn't go up north today - i did the 'tel aviv path' instead, starting with accompanying Orit for a procedure at the health clinic, and then running a few errands for her while she recovers. I wound up doing the same number of steps as I would have had i joined Ezi up north, but with no inclines and no antiquities. Late in the afternoon when I picked my granddaughter up from kindergarten i offered to change places with the guard, David. He actually seemed enthusiastic about the idea of being a grandparent, and almost took me up on it. Now David (of course he had a different name in the Russian army) has always seemed to me to be capable of murdering an enemy with no regret or guilt, but suddenly he was gentle, sweet, hopeful.

All in all connections between people in Tel Aviv seems to work that way. Many people seem very tough and serious, but after a few words, they soften, sometimes entirely. "Lets hurry this up," I said to the guard in the hospital who was checking my trunk yesterday, "I'm in labor." He didn't stop opening the many boxes in my car, but he smiled, not wanting to insult a 72 year old woman, but clearly planning to call his girlfriend right away to tell her the joke. i looked at the rear view mirror as I passed, and he was already on the phone.

Lucy Aharish kills me. She attacked our Minister of Culture on her television program today for ruining Israeli culture and got so worked up she couldn't begin her interview with Yair Lapid. She joined him after she had calmed down. here is the Hebrew I love her for it, and I even liked Yair Lapid for his gentle understanding of her situation, repeating at times her keywords of the need for respect for others. He seems to like the word "love" a lot, even though it's not a popular word in the world today.

I'm getting more and more obsessed about Kurt Gerron - it's almost as mad as when I wrote about Adelaide Crapsey - forgotten people who don't deserve to be forgotten. I seem to have abandoned for the time being the "Poets and Their GRaves" project in favor of this. Even though people have written about him it has all been scattered, mostly focussing on his film of Thereisenstadt and death.

When we left Tel Aviv this afternoon I began to see an unfamiliar wisp before me around Ben Gurion. As we drove toward Jerusalem it became bigger and more brown and we speculated on where it was coming from. Modiin? Shaar HaGay? Neve Ilan? In the end, I said, it will be coming from Hadassah. We had left early enough in case of traffic, and indeed, as we approached Hadassah, roads were blocked, cars and busses were turned back, and the fire became more and more glorious. 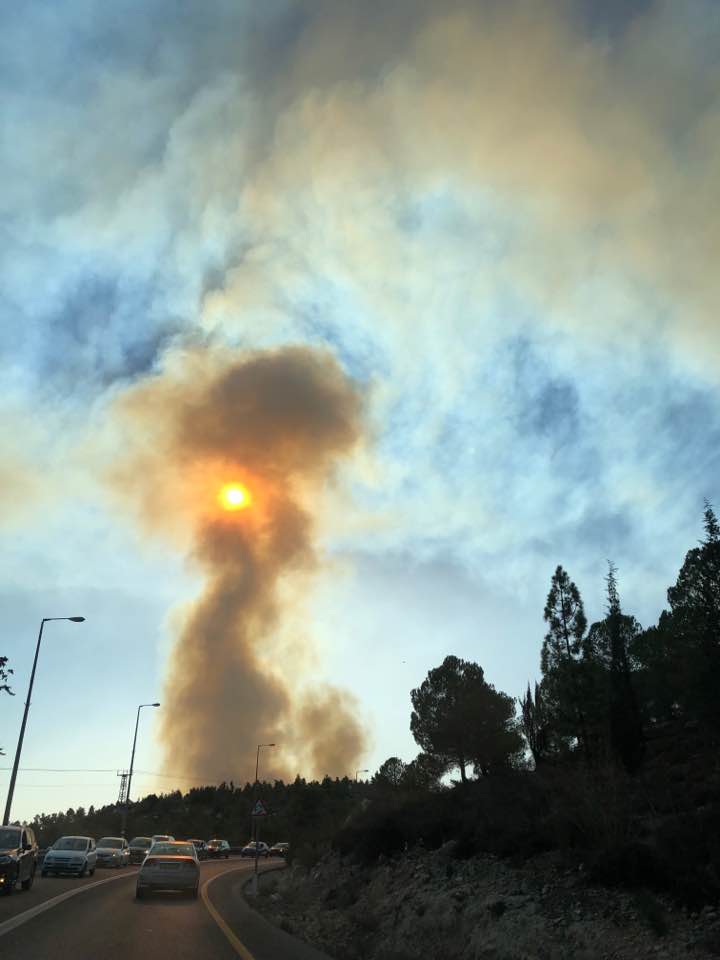 With a little editing it could be close to Van Gogh's "Starry Nights." But it was a forest in Sataf - terrible. That's not why we went to Hadassah. If you remember we went to see Professor Dina Ben Yehuda about six years ago. She's now a Dean and has less time than before, but she's worth waiting for. Simple focussed logic. She wouldn't let me talk or interrupt her thinking, which I hate, but I could see the wheels churning and it was really admirable. Her conclusions about Ezi too were on target. Just as I think - Ezi's cancer is most likely indolent. I love deductive thinking, thorough research. Not that Dr. Kirschner at Ichilov is not right - he's following the same protocol as Ben Yehuda prescribed, but she does it thoroughly, perhaps (wink) also because she's doing it privately.