On the night Rabin died I dreamt I wandered the streets
homeless and lonely in a crowd of confusion, ricocheting
off relatives and friends barely regarded, while dogs of peace
ran with panthers and tigers all loose and free.


No one was working -- everyone
out on the streets or in groups
sleeping in different houses, using
interchangeably each others’ phones --
connecting with wrong numbers
saying a few words, disconnecting
indifferently

Unseasonable cold penetrated my clothes,
and uncoated I sought shelter
from cloaks of the dead,
but found myself in another byway
before I could wrap myself in them

The river was solid and the earth
liquid under our feet -- the worst
walked on water while the best
fell in the treacherous sands.

at the memorial service today the government was blamed for dividing the people. i don't believe any serious attention was paid.

The Natural History Museum has added an exhibit about evolution - and I would like to congratulate Israeli upon moving into the 19th century.

for me the moment of joy however came when we got connected to "yes" again today, and can watch television that is clear and usable. i do love series, and there are so many we have missed in the past months. i like coming home - like after the reading last night - and watching the news - and then cooling off with something calming like "The Deuce" where the murders make sense. i mean come on the murder of khashogi is so obvious it couldn't get into the weakest series ever.

We were supposed to be taking a comfortable nature walk in a patch of the path that crosses Israel from north to south. A cave, Capernaum, a walk. OMG everything hurts me, even my toes. but especially my back. we walked down into a wadi, from which it turned out, there is no escape for three hours as we walked to what is left of the river Nachal Amud. it took five hours and three liters of water in the 34 degree celcius heat, and i was unable to move much less upload the few photos i managed to snap. Maybe after a massage.

We are still walking like ducks and i am trying to persuade Ezi that we don't need to walk all over the country in order to prove that this is ours. We need to learn more history, but at our age we could be content with slides... He is not listening. Seeing a cave where neanderthals buried their dead with some kind of ritual seems more right that hearing some professor talk about it. I agree, theoretically, believe in first hand information - especially in this day of fake news - but i don't like to ache all over. Any ideas, anyone?

I know that even in Capernaum, which is very built up and touristy now, so different from the last time we were there, there are things to discover, and seeing how the Christian tourist industry is totally independent from this country in particular, was a great insight for me. I sat there, far from my group and the lecture we were getting on the synagogue of Capernaum that was probably not a synagogue and all that, and listened to the tourists and their guides. it was as if i were in a different country, a kind of holy-disney world. This is the house of St. Peter's mother, they kept repeating. So what if we eternalize myths, i think. and maybe they're right. But they were paying for this in dollars, and that money does not go to taxes - that money goes away, to the church maybe, to people's pockets.

This is a busy afternoon - reading for Rivka Bassman's book, then reading in Little Prince, then visiting with Rena and Grant, and then back to enjoying our return to YES. 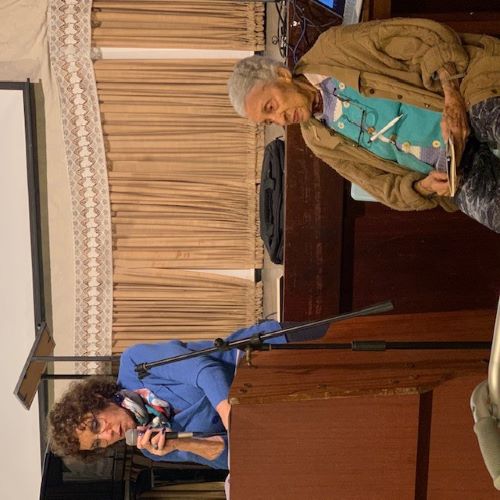 16 rockets so far from Gaza. Who knows what this night will bring?

But the day was so innocent - a family bar mitzvah at a restaurant. the bar mitzvah boy invited his basketball team and got a video blessing from the coach. It's so hard to imagine that the day to day life here is so banal and yet we're inches from war every moment.

The readings last night were wonderful, incidentally. Although I had to leave Rivka's evening to get to the evening of 100000 poets for change, i did get to participate in most of it, and revelled in the joy the evening brought her. her book is all about her love for Mula and his paintings, and the nearing eternity they will spend together. Love like that is an inspiration. their life together after the war is something i've never heard her talk about, but i know they rescued many people, getting them out of Europe and to Israel. And after that she taught children, many of them orphans from the Holocaust, and gave them new beginnings. It seems like a very fulfilling existence after a horrible life in the camps.