Off to Pappa's for lunch. Maybe for the day.

I forgot! It's fair day at Nachalat Binyamin! When I left Pappa's to walk down Allenby St. to get a proper mezuzza for the door, I almost got distracted by the crowds, the action, and then Miri Aloni singing on the street in the shuk. "She's always here," my daughter tells me, and some of the boys I talked to afterward say that it is demeaning. I don't know. Here she is, the beautiful musical star of the seventies, who sang the song of peace to Rabin in the square just before he was murdered... Here she is, with her incredible voice, and presence, singing in the marketplace for loose change. "You're finally here," she said, when i came up to her, but then she looked away, as if she didn't recognize me, so I just dropped ten shekel into her guitar case and walked away. But what I wanted to do was hug her. Even though I never knew her well, and it would not be surprising if she didn't recognize me, I will always feel close to her if only because of the how much she was a part of our society, our development. I am not ashamed for her that she is singing in the streets. I am ashamed for myself and for my people.

Buying the mezzuzah: I didn't like the idea of not putting up a new one, with a new blessing and a new beginning. I decided that I had to buy one at the nearest shop, pay whatever I was asked, and say the proper prayers when putting it on. But there were ladies in front of us in the shop, buying tfillim and tallisim for their sons' bar mitzvah, so we stood on one foot and then the other, sizing up and being sized up by the hatted men in the shop, looking down in their beards and sneaking glances at bare legs. It was actually fun. But I have a feeling one of the guys followed us down the street and saw us putting a kosher mezzuzah on a treif restaurant.

You know I have a very soft spot in my heart for Sharon Moldavi - so now he's doing a video clip of his song, "Mother's Eyes" and he is asking that people send in digital pictures of mothers to be part of the clip. This link to the article in La'Isha is in hebrew.

Last night I settled down to write a nice long diatribe about the coming faculty strike at the university, and began with a warm-up paragraph about the first rain of the new year, the yoreh, and how we all had run to the window when it began that day...Then suddenly there was a big crash and flashing light and the electricity went out. I kept writing but with the internet connection gone all was lost. When it came back a few minutes later I had to run around resetting the clocks, checking the appliances and computers, etc. and got distracted with life until nine when I sat down again before the screen. And the electricity went out. They're cutting trees, a neighbor explained to me, when after an hour i went around to see if anyone knew what was going on. I assume she meant that trees were struck by lightning and were now endangering the electricity. Anyway by the time the electricity came back around midnight i was too intoxicated by the scented candles and the romantic music on the old transistor radio to consider writing. 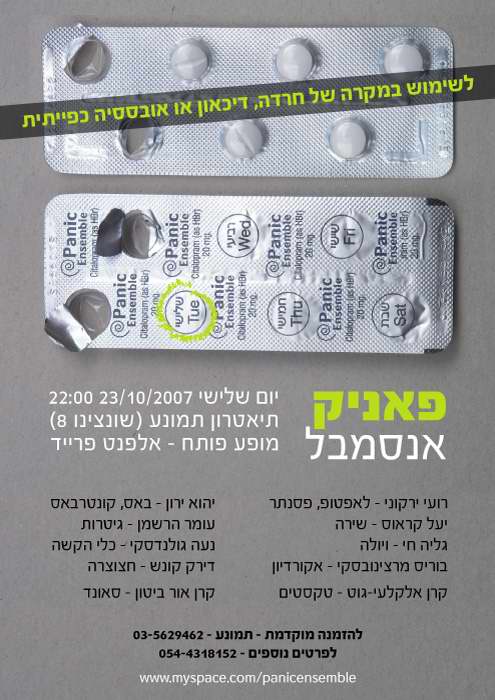 Panic will be appearing on Tuesday night at TMUNA on 8 Soncino St in Tel Aviv at 10 p.m. Most of what they sing is my poetry - but they are way beyond my poetry - creating a new media and new music.

I usually write only about English in Israel but my friend Robert lives in the U.S. and writes in Hebrew. His book is here. Look at the great cover! The poetry is a breath of fresh air to Israeli poetry because it comes from such a different perspective.

Congratulate me - got a new computer. I wanted to buy it in the U.S. but it didn't work out. It would have been about $1000 less.

Here's a link to Pappa's