I was thinking all night about the movie that is the israeli oscar nomination, Adama Meshugaat, which is for some reason translated as Sweet Mud. It is another criticism of kibbutz life and how it screwed people up - often extremely funny and very moving. The acting is really beautiful and the structure perfect. It seems like it wanders, and doesn't pick up on details it throws out here and there, but that's the point, that you get distracted by little things and don't always pay attention to the general direction. But I got sidetracked - i started remembering my first visit to a kibbutz- lochamei haghettaot - in 1965 - and how everyone but everyone worked hard to explain to me what the ideological significance of what they were doing. I seem to remember the artist Mula Ben Haim (who grew up across the street from my parents in Lida) explaining to me about how he was given a studio and materials to paint with by the kibbutz, but he also worked in the cowshed. There were a lot of other people i met there, who took me through children's productions, their schedules, etc. My only bad moment in my days at the kibbutz was when i shared with the joke-telling. "What's better - five daughters or five million dollars," I asked. And then answered - "five daughters, because when you have five daughters you have enough." There was a silence. And then someone said, 'capitalist humor.' It was humiliating, but enlightening.

Anyway I know I'm going to hear from my ex-kibbutz friends who will remind me of how they were screwed up by the kibbutz life, but i think they wound up to be pretty remarkable people.

As if continuing our conversation, tonight Michal Snonit talked about her life on the kibbutz, introducing a poem she read in the context of a discussion of 'home.' She is such a warm and communicative artist, even her discussion of growing up in the children's home seemed to prove the little point i had made - that some really cool people came out of kibbutzim, so it couldn't be all that bad. And I know some people very close to me who would have greatly benefitted from growing up in a kibbutz

The forty thousand residents constantly under fire from Gaza are not forgotten in Tel Aviv. Even though we're so much more interested in gossiping about our silly president, we think about and feel the constant terror under which the people of Sderot, Nir Am and other places, live. The problem is we seem to be reaching our saturation point, unable to face any more terror. I think it is more the passivity of it, the inability to take action.

Even watching the opening of parliament today was making me nervous. Just watching Bibi strutting scared me. So I opened the windows to let the fresh post-rain air come in, went out for a walk, splashing through all the puddles i could find, and as I came home, I heard the television warning about mosquitoes and deadly diseases. Keep your windows closed! So I shut the windows and went to put on face cream, and the next item on the news was about the dangers of cosmetics....

In interviews about the conference on Aliyah writing next week (See: invitation) I got asked repeatedly if I am not having this conference to boost my own rating as a writer. So i have to explain. Were I not so overwhelmed by arranging sandwiches for this conference, I'd be finishing my book of Selected Poems that Kibbutz Hameuchad contracted with my for this year, and my book on Open Secret: Poetry and Popular Culture. I'd be planning my next reading trip abroad for the book of selected poems I should have done last year in English. And, by the way,The group that is based on my poems, Panic, is featured on Radio 106 tomorrow, and will be appearing on Wednesday at Levontin 7.

So much for furthering my career with conferences.

2 sides of the british boycott:

Subject: If you're going to boycott - do it properly!

OK. So I understand that you are ticked off , and in
love with the Palestinians.
That' with me, as long as you have truly weighed up all the
facts.

So, you want to boycott ?
I'll be sorry to miss you, but if you are doing it - do it properly.
Let me help you.

Check all your medications. Make sure that you do not have
tablets, drops, lotions, etc.,
made by Abic or Teva. It may mean that you will suffer from colds and
flu this winter but, hey,
that's a small price for you to pay in your campaign against ,
isn't it?

While we are on the subject of your Israeli boycott, and the
medical contributions to the world made by
Israeli doctors and scientists, how about telling your pals to boycott
the following.....


An Israeli company has developed a simple blood test that
distinguishes between mild
and more severe cases of Multiple Sclerosis.
So, if you know anyone suffering from MS, tell them to ignore the
Israeli patent that may,
more accurately, diagnose their symptoms.

An Israeli-made device helps restore the use of paralyzed hands.
This device electrically stimulates the hand muscles, providing hope to
millions of
stroke sufferers and victims of spinal injuries.
If you wish to remove this hope of a better quality of life to these
people, go ahead and boycott .

Young children with breathing problems will soon be sleeping more
soundly,
thanks to a new Israeli device called the Child Hood.
This innovation replaces the inhalation mask with an improved drug
delivery system
that provides relief for child and parent.
Please tell anxious mothers that they shouldn't use this device because
of your passionate cause.

These are just a few examples of how people have benefited
medically from the Israeli know-how
you wish to block.
Boycotts often affect research.
A new research center in hopes to throw light on brain disorders
such as depression and Alzheimer's disease.
The in the at
,
aims to bring thousands of scientists and doctors to focus on brain
research.

A researcher at 's has succeeded in
creating human monoclonal antibodies which can
neutralize the highly contagious smallpox virus without inducing the
dangerous side effects of the existing vaccine.

Two Israelis received the 2004 Nobel Prize in Chemistry. Doctors
Ciechanover and Hershko's research
and discovery of one of the human cells most important cyclical
processes will lead the way to DNA repair,
control of newly produced proteins, and immune defense systems.

The Movement Disorder Surgery program at 's has successfully eliminated
the physical manifestations of Parkinson's disease in a select group of
patients with a deep brain stimulation technique.
For women who undergo hysterectomies each year for the treatment of
uterine fibroids, the development in of the
Ex Ablate 2000 System is a welcome breakthrough, offering a noninvasive
alternative to surgery.

is developing a nose drop that will provide a five year flu
vaccine.
These are just a few of the projects that you can help stop with your
Israeli boycott.

But let's not get too obsessed with my ducal research, there are
other ways you can make a personal sacrifice
with your anti-Israel boycott. Most of Windows operating systems were
developed by Microsoft-Israel.
So, set a personal example. Throw away your computer!
Computers should have a sign attached saying Israel Inside. The
Pentium NMX Chip technology was designed
at Intel in . Both the Pentium 4 microprocessor and the Centrum
processor were entirely designed,
developed, and produced in .
Voice mail technology was developed in .
The technology for the AOL Instant Messenger ICQ was developed in 1996
in by four young Israeli whiz kids.

Both Microsoft and Cisco built their only R. & D. facilities
outside the in .
So, due to your complete boycott of anything Israeli, you now have poor
health and no computer.
But your bad news does not end there. Get rid of your cellular phone.
Cell phone technology was also developed in by MOTOROLA which
has its biggest development
center in . Most of the latest technology in your mobile phone
was developed by Israeli scientists.

Feeling unsettled? You should be. Part of your personal security
rests with Israeli inventiveness,
borne out of our urgent necessity to protect and defend our lives from
the terrorists you support.

A phone can remotely activate a bomb, or be used for tactical
communications by terrorists, bank robbers,
or hostage-takers. It is vital that official security and law
enforcement authorities have
access to cellular jamming and detection solutions.
Enter 's Net line Communications Technologies with their security
expertise to help the fight against terror.
SO ALL THE NOISE ABOUT THE LISTENING TO OUR PRIVATE TELEPHONE
CALLS,
YOU SHOULD KNOW WHO IS DOING THE LISTENING FOR US.

A joint, nonprofit, venture between and will
result in a 5 day Business Development and
Planning Conference next March. Elected Israeli companies will partner
with firms to provide innovation
to the need for homeland security.

Relative to population, is the largest immigrant absorbing
nation on earth.
These immigrants come in search of democracy, religious freedom or
_expression, economic opportunity,
and quality of life.

Believe it or not, is the only country in the world which
had a net gain in the number of trees last year.
Even Warren Buffet of Berkshire-Hathaway fame has just invested
millions with Israeli Companies.

So, you can vilify and demonize the State of Israel.
You can continue your silly boycott, if you wish.
But I wish you would consider the consequences, and the truth.

Think of the massive contribution that is giving to the
world,
including the Palestinians - and to you - in science, medicine,
Communications, security.
Pro rata for population we are making a greater contribution than any
other nation on earth.

I forgot what the other side was.

The toughening policies about Palestinian students in Israel exhibited in cases like the article in the papers a few days ago in Haaretz have been troubling me since 2001 since the direction of exclusion became clear. The general situation is obvious. We are not in a good relationship with the Palestinians and have reasons to distrust them. And a large number of terrorists are students. HOWEVER, we are capable of investigating each case, and allowing those not dangerous to study here. I don't understand and i will try to find out.

Just a family snapshot for those of you who have not had the pleasure of meeting Guy: 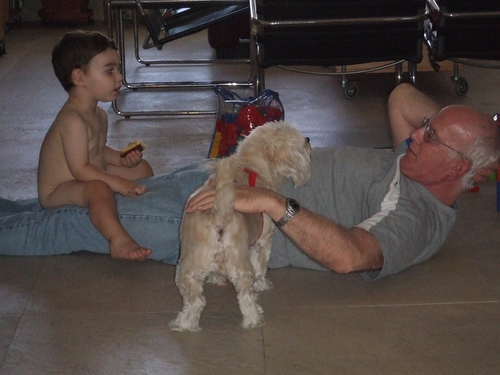 Panic is playing tonight at Levonin7. You can see them performing my poem, Obsessions, here

I was on my way to get interviewed on the IBA news today, and the traffic was a mess so I drove onto some side street, thinking I'm going off the map, and suddenly I see both my brother and sister-in-law. He's just ogoing into the doctors and she's got a little while to kill so gets into my car and drives with me to the station. We go left and right and right and right and left and finally arrive at the gate. She gets out and as she's getting ready to walk back to the doctor, she notes in passing, "I served here in the army fifty years ago."

found this quote on the google home page today:
I'll be more enthusiastic about encouraging thinking outside the box when there's evidence of any thinking going on inside it.
- Terry Pratchett

Our president is really going through the wringer. As one who really wanted the other delegate to win, as one who has been the victim of harassment (as have probably all the women of my generation), I am still very unhappy by the way he is being judged before the information is in. We really have to get some general rules of ethics for the press - all over the world.