"something wicked this way comes," writes my bosom friend from Kobe, as she awaits the typhoon It is scheduled to hit her in 2 days and it is terrifying. Something like what it must have been like to the people in the synagogue in Halle on Yom Kippur.

Of course there were other reasons than the miracle of prayer for salvation that saved those people. Ezi took one look at the door of the shul and shouted - "Wow! He emptied 20 bullets into the door and didn't aim for the lock." so stupidity helps when it comes to enemies.

but sometimes, you may say, even stupid people succeed.

Stupidity is a word i don't like to use - i think it is more a function of education than mentality most of the time. in this case it is a function of brainwashing. with our information revolution we are even more susceptible. we have to learn to think for ourselves and show others how to do it.

Ever been in the situation where you know someone is faking, and the faking in itself is an insult to you, because they know you know they're faking and they just don't count you enough to care? That's one kind of person in my life.

Another kind is a person like Alex, who saves people's lives all the time but never talks about it. If this show hadn't appeared on tv of how he saved this guy who's face was blown off in the 73 war, i would never have known. And I knew him around then, and now as well.

this is about their first meeting in 46 years.

My six-year-old granddaughter asks a lot of questions about my past. Most of them are necessary lessons to learn about how her own future will be. But sometimes I think maybe she'll be wondering about how I lived and the question never comes up. So here's a picture: 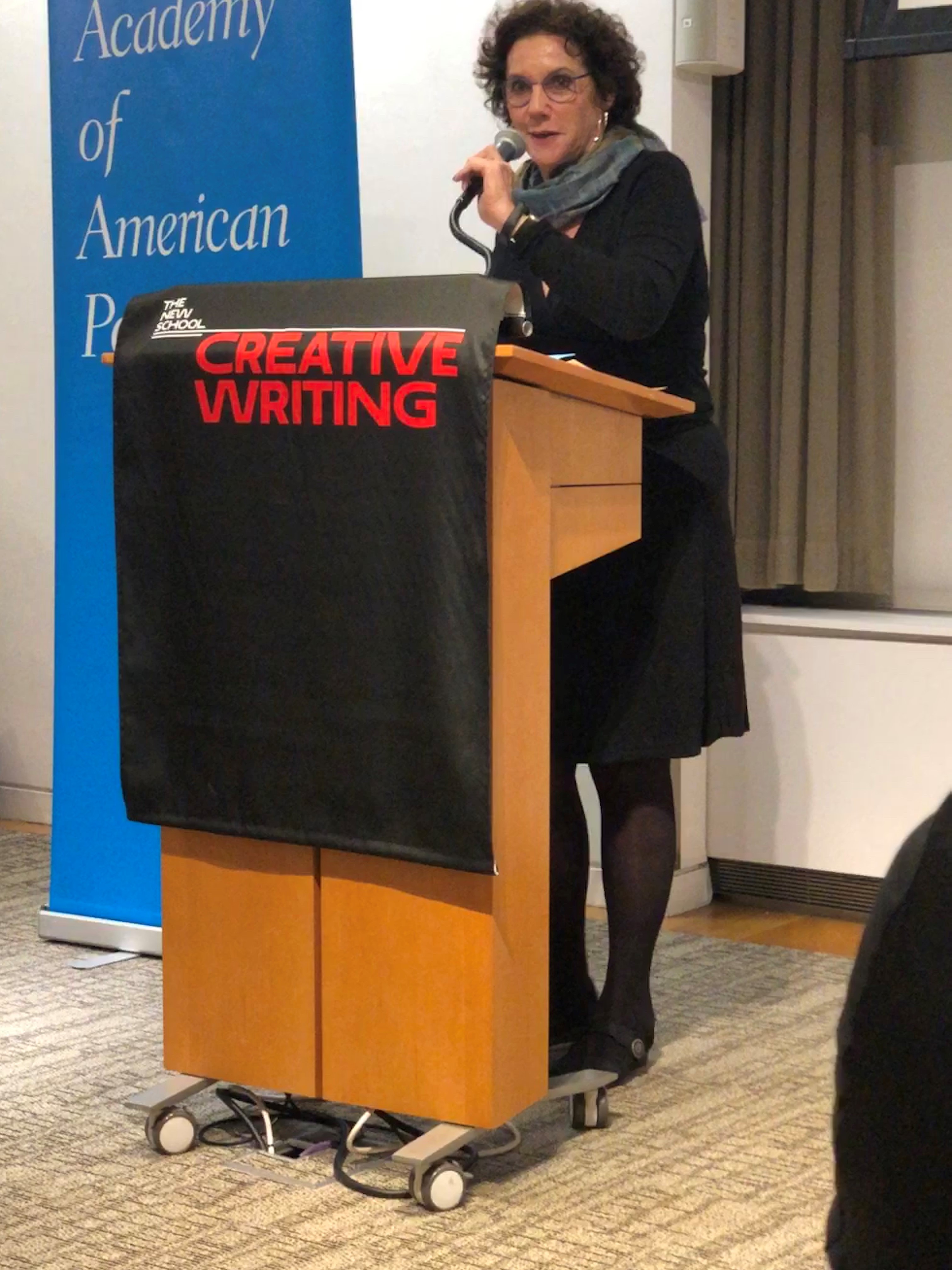 I like reading poetry - any time - all the time. This time was at the New School for Social Research a few weeks ago.

Jeffrey was my first.

I must have been twelve
and hired to care for
what his parents called
the Mongoloid Child.


Jeffrey
was my first. After a few days
of playing, he reached out
in welcome and I loved the feel.
Opening the door I would call
‘Jeffrey, Jeffrey!’
and fold myself into his arms.


Every day, I would leave
the difficult maneuverings
of adolescent relationships
and hold on to baby Jeffrey
for dear life.

After the gates close
leaving us alone
facing an unknown year
three fragile walls
invite us in
sheltering from the world
and opening a connection
with the sky.

Yes, yes, the frail hut says,
we are all wanderers
in our precarious havens.

i'm on a role - one more poem about embracing:

well, its a draft:

When the olives were ripe
and the branches hung over
the walls of the yards
onto the sidewalk of my street
a Bedouin woman would come
with her wide dress
and spread out her skirts
to the trees. Her child
shook a stick
and the branches would release
the wondrous fruit.

She has not appeared
in recent years,
and no child ensures
the olives will not fall
overripe to the pavement.


Yet whenever I pass the trees
I envision her,
her arms opening wide
to the tree, inviting it
to release its bounty
to her welcoming lap.

I know the middle east is falling apart. i know the Kurds helped the US in WWII. I know we have a girl in Russian prison for 7 and a half years for going through Moscow with 9 grams of weed. But I had a full day of my own.

Let's start with a seven oclock appearance on the 10th floor of Ichilov hospital. i had it all figured out. Despite the rush of chemo treatments today, because of the holidays, we would be in and out by 10 and home in time for the movers to pick up our old washing machine and bring in the new one. After all, it's only a blood test, some pills, and a five-minute injection. But despite all the friends we have in the department, and the fact that Ezi got in first, someone messed up the protocol and it was getting late. So I went down to get coffee and rolls.

Because of the holidays the nearby cafeteria was closed, so i wound up in the basement standing in a long line . And then the rolls came in a bag that i could put over my wrist but the coffee had to be carried separately, because they were out of trays and sleeves. So i went back in the very crowded elevator to go up to the 10th floor.

At that point my phone began ringing. the musical ring that is reserved for Ezi. my hands were occupied, so i shrugged to my fellow passengers in apology. we stopped at every floor and some got out. by the fifth floor the seven people remaining began swaying to the music of my phone. every one of them was also going up to the cancer ward and they were dancing.

By the time I got to Ezi he was on the phone with his daughter. The movers were on their way, i had to leave at once. so i dropped the coffee off with him and took the silent elevator down to the basement where the exit closest to the taxi stand would get me home.

That's when i realized: I had forty shekel with me. The cab I entered, seeing my rush, began to drive away immediately, but when i asked him if he took cards, he began to look around for where to turn back. "How much will this ride cost me?" I asked "Forty shekel," he said. "Off the meter." so we went.

Have you ever had an encounter with a mover in Israel? in some ways it is the same for men and women, but the pressure is much worse. The guy gets off the truck and loads the washer on the cart. "You had to buy the heaviest machine there is?" he says., and i knew i would not have an easy time. Of course the machine didn't fit in our elevator and another mover was needed to lift the burden up one flight. And then it wouldn't fit through the bathroom door to the laundry, even though the other machine slid out easily. So tomorrow the installers will bring it in.

Neither of the movers marveled at the contraption Ezi installed to ease the moving of the washing machine, upon which sits a big dryer. this dryer's up in the sky until tomorrow! 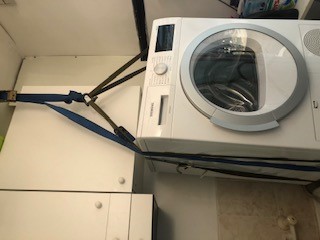 ""And what about a tip?" the less aggressive one said as he was leaving the door. I pulled out a hundred note i'd gotten from the grocer and vowed that tomrrow will be a better day.

Not long after Ezi arrived, and was sent to bed immediately, together with the new washing machine, and is sleeping piecefully

Fortuneately the rain began the minute after, and i believe these rains give us a chance to be born again.