The smell of rain last night woke me even more than the massive thunder. and the joy of rain after so many months of drought, of dying gardens, and fires gave my subsequent sleep an added quality. i had not been sleeping for the past weeks because of my poor naked toes, sensitive to the weight of the blanket, but the pleasure put me into the world of pleasant dreams. but the pain returned and by the afternoon when i was caught in a downpour and was soaked i was longing for the sunshine. But we're in for a few wet days and I will have to drag myself around in sandals, calling out to all those around me to be careful of my feet.

Today we went to the ministry of the interior to renew our passports and i, remembering the messes in the past, made sure i had a good meal inside me in advance, and found a pair of shoes that would protect me from the crowds. But it turned out that having an appointment in advance and the new electronic systems allowed us to be out within an hour. The passports, we were told, would be delivered by messenger. soon after we received text messages reassuring us that we'd have our papers within weeks. Pretty cool.

Grounded by my silly toes, I am already following the US elections even more than the proposed strike in Israel tomorrow.

in the past year the shabak has prevented 480 terrorist attacks. this kind of information is rarely released and i'm surprised the head of the national security announced it today. he was warning the country that the quiet we seem to be experiencing is only an apparent one.

Elections - what do they mean? I am too full of anxiety to be happy about any political development. I should do what my friend does, excapes from the world into nature and ecology, more specifically eco-poetry. it seems like a wonderful way to soothe our conscience. but somehow nature here hasn't loved me much - my toenails will not allow me to go on the next trail, and any way i get separation anxiety from the refrigerator out there in the wild. having been home for the past week or so, i am beginning to believe in agarophobia as a way of life. but it means turning off everything, even phones.

We visited the statue of Miri Regev today in Habima Square. 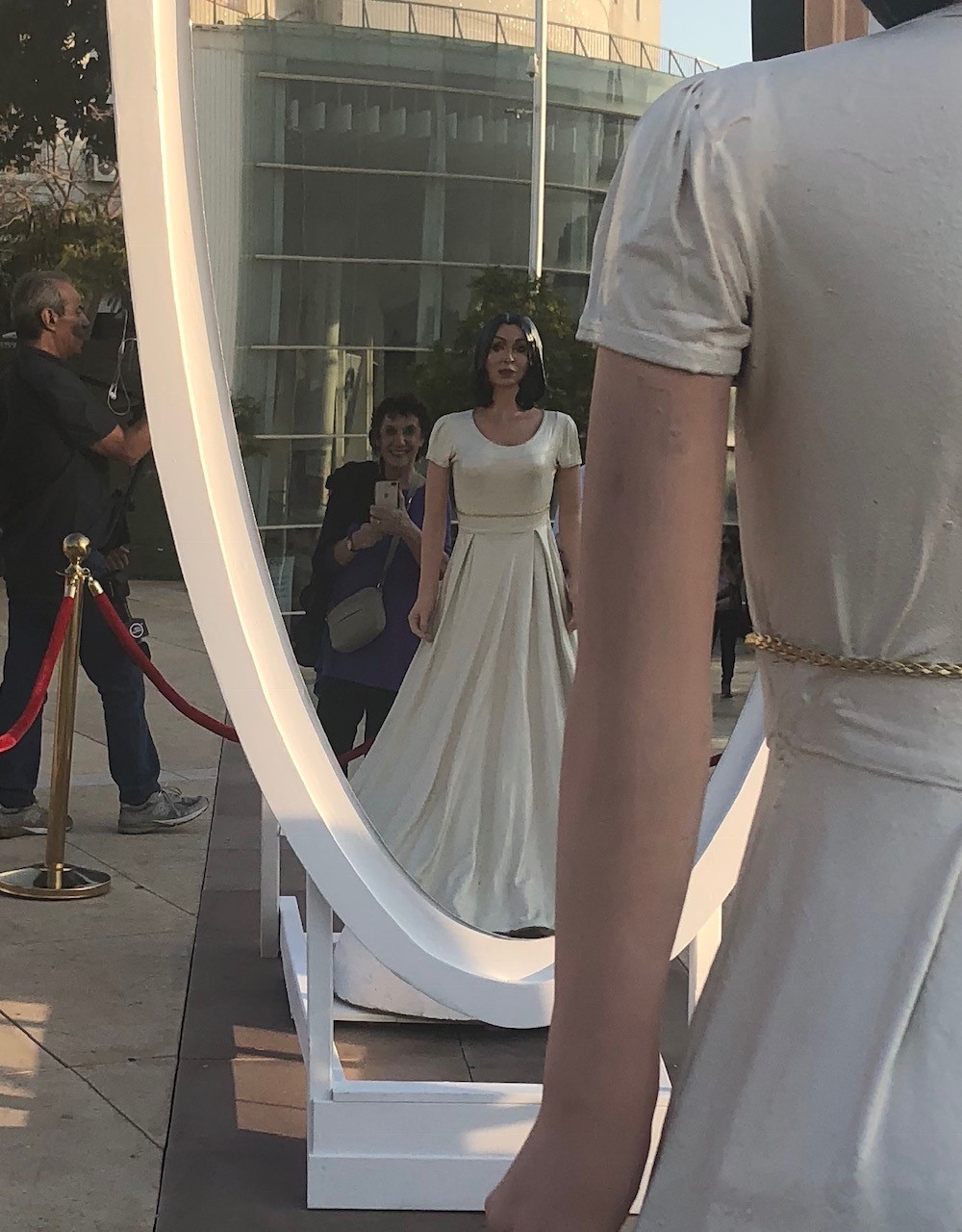 It was taken down an hour later. The point of a statue facing a large mirror placed in the center of the culture that is being depleted of funds (this may be the place to remind us all that Habima owes me thousands of shekel for unpaid work) is clear. But in case it isn't, visit Steve Horenstein's Blog which has a fascinating post about the rules for art under a fascist regime.

But she wasn't all that was going on.

We also had a pretty awful lunch with awful service at Landwer's Cafe, that was only made up for by a (somewhat) better dessert.

i was incredibly thrilled when last week a review came out in Yiddish of my book. I had published in the same paper, the Forward, in Yiddish, 62 years ago, and just the thought of being reviewed there made my heart skip a beat. Here it is:The Forward - Sholem Zachary Berger -Yiddish

But when my brother read it he noted that it called me a novice poet, that it didn't seem to know my history, and didn't seem very positive as a review. I haven't read it since.

How strange - i spent yesterday night mourning the death of Christopher Lehmann-Haupt. Last month we had dinner and were in the middle of a warm correspondence. I will miss him, and regret terribly not seeing him more often. We discreetly didn't discuss the situation in Israel, but then again, no one brought up the subject of Israel.

When corruption is alleged concerning almost every single person surrounding the prime minister, is it possible that the pm is not corrupt? is it possible he doesn't know that even our defence has been compromised by treachery and greed? that his son is laundering money in Panama? if he is not implicated, is he ignorant? I don't get it.