There is the big picture - the murder of Yitzchak Rabin. And there are the small pictures - the way the lives of millions were changed forever by it. I know even my life changed irrevocably that night.

The business of the small picture, the lives of individuals, was the unofficial subject of the trip we took today - a guided historical tour of the bus route of the only private bus line ever in Israel - line 70. We spent hours standing before the houses of totally unknown people, listening to endless stories about their place in history. It was quite remarkable. Like the ruins of a house in Pardes Katz, for example, a place which, it turns out, was named for the American who set up the orchard and the neighborhood around it to service the orchard. This is the little avenue in the middle of a field in a very questionable neighborhood that led to the house that was torn down only recently. 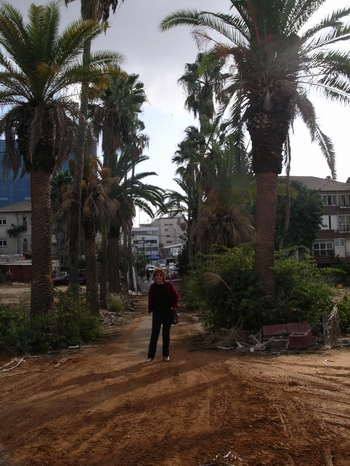 You can see the old glory but you wouldn't notice it among the ruins unless you were looking for it. So we heard all about the rise and fall of the Katz family,and the whole neighborhood took on a different dimension.

Before that we visited a park named after Esther Rubin, wife of the painter Reuven Rubin. These trees, which seem to whisper together as the overlook the bustle of Geha road, represent the couple from well over 50 years ago. I couldn't get the dimensions into one picture, and didn't get Ezi to weld them together, so here are 3: All right, so the pictures aren't all that spectacular. But the idea of the remnants of peoples lives that shaped the environment in which you live are all around you is magical. I'm looking forwrd to more tours like that, not to famous places, but ordinary looking ones.

At night we visited the beleagured Mishmish, forced temporarily to close down at 1 every night until the city makes a decision on the 15th about what to do with them. Since they're the quiestest bar on the street, and the justification of shutting them down is the noise they're supposed to be making, i don't see how there can be anything but a decision to let them go on, along with the rest of the city, until the morning. They are apparently losing a goodly portion of their income with these temporary restrictions. But we felt nothing of it there. We were regaled with a really wonderful dinner, great steaks, wonderful carpaccio, calamari that melt in your mouth, etc.

There's still time to get some atmosphere there before they close at one. If my husband was not snoring at my side, i would consider seriously going back later tonight. .

I had a meeting at a cafe on Dizengoff in the afternoon, and it was Dizengoff and crowded with people, kinky, cool people. I was meeting with Moked and suddenly remembered how he would hold court on Friday afternoons at Cafe Stern. How Yona Wollach came, and Maya Bejerano, and a dozen other famous poets, and all of them had 'business' at the cafe those afternoons. Poetry was serious business then, poets were creating the language, creating a culture. I loved Dizengoff then, in the early '80s. After I'd finish at Stern I'd wander off to Cassit and meet Dahn Ben Amotz or David Avidan or someone else exciting like him. These writers were great then, not just because they wrote well, but because they wrote ab ovo, with no precendents. It was a new world.

Another new world is the Global Voices Site Blog from all over the world, and Lisa's up there. See global voices

I'm not going to write about the memorial service today. Yesterday I went to visit the site where Rabin was shot. It was covered with flowers and mourners were standing all around. I was only there for a minute but the sight pierced my heart. It was almost impossible to come home to family and babies, to leave that spot. I'm almost glad the official day at the university was postponed to the 14th. It gives me time to prepare myself. 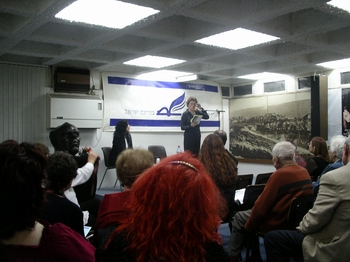 This is an invitation to Beit Hasopher on the 15th, where I am reading with some of my oldest friends - Moshe Ben Shaul and Naim Araidi among them.

Hof Genossar is the scene in 2 weeks forJacob's Ladder Folk Festival. I'll go there if I can get away from other responsibilities.

France scares me. Not just because of the present violence but because the reasons for the violence are deep and not easily solved at this moment. This summer when i was there it was palpable. See my diary. When I thought it was just antisemitism Marc Weitzmann explained that it was far more general and intense, that it was about deprivation and the creation of an entire generation of outsiders with citizenship. Can you imagine this happening all around the world? This isn't a question of Islam - but of inequality. And equality can't be obtained just by granting rights. Without education, and education for democracy it is in fact dangerous.

But I am not totally rational right now - and have other things on my mind.

Let me distract myself then with the cats of Tel Aviv. I am actually always ready to talk about the cats, simply because they constantly surprise me, constantly show that given sufficient freedom they develop great individual personalities. There is one gate at the university where for years a mother cat and kittens have been frolicking. I'm pretty sure the mother is the same, and the kittens of course renew themselves biannually. But although the turnover seems to be great, her maternal devotion never diminishes. Sometimes she will look at me bending over the kittens, clearly evaluating the dangers, and i am reminded of holocaust survivors - the ones who have managed to create a child after terrible maternal losses during the war...

On the other hand, there's a cat who reminds me of an old boyfriend: 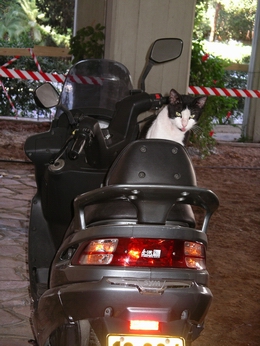 you know who you are.

Dans l'adversite' de nos meilleurs amis nous trouvons quelque chose, qui ne nous déplaît pas. or "In the hard times of our closest friends we find something that doesn't displease us." And it seems there are people who are taking great joy in the troubles of the French. When we should be learning from both sides and helping them. Believe me there is a lot to learn from this situation. 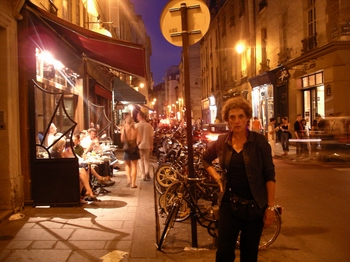 This is in the Jewish Quarter of Paris. Where some of the contrasts are paradoxes began to make sense to me.

But my focus is still on the condition of my very sick nephew and it is hard for me to view the world outside with any perspective.

As an American I am addicted to voting, and Today is election day in the labor party. Since my local poll is the same as Shimon Peres', there is alway a lot of TV action around there, so I decided to wait until the afternoon when things quieten down. But there is no way I will not vote. Even though i have great difficulties with the concept of absolute declarations. For example, I would write into my ballot that even though I am voting for Shimon, I would like him to take into consideration the platform of Peretz, the emphasis on the disenfranchised workers. I'd like to vote 70% Peres and 30% Peretz, and keep those percentages liquid.