Haven't remembered to put poems up here lately. So here's one:

Poets sometimes too
in these months
return to the earth

withering at the thought
that they cannot create
themselves anew

Now that is not really an Israeli poem. In November there is always a vast melancholy in England - an anticipation of a long winter ahead. But in Israel there is a kind of relief - a feeling that finally the heat of the summer has passed, and the weather is now bearable. I don't think people really think clearly in the summer - whether there is air conditioning or not. The air conditioning helps, but somehow there are restrictions of the heat.

The only melancholy of Autumn here is the feeling that the summer was not used fully.

There's something very seedy about Tel Aviv. I was thinking about it as I looked down at the dirty sidewalk this evening at the little shopping corner on Tagore Street. Most of the stores were closed, but there was a kiosk and my friend went to buy cigarettes. A couple of teenage kids were hanging around talking to the owner, and some blowsy woman was buying ice cream for her kid who never should have been awake at that hour on a school night. I checked to see where the tobacco, papers and filters were on the shelf. No self-respecting kiosk goes without. Even our little grocery has them. And nobody uses them only for smoking tobacco. I didn't ask the owner if he sells dope but I'm pretty sure our grocer doesn't. I figure you get that from the guy in the nearby park.

Oh and I forgot to mention that my friend was overcharged for the cigarettes. She says that is typical of Ramat Aviv.

We're trying not to get addicted to the tv and internet - it looks like Obama will win, but I've seen last-minute revolutions before.

So I stopped in a cosmetics store to distract myself and asked the woman behind the counter if she has a long-lasting lipstick. "long-lasting?" she says in a thick french accent, clearing seeking the proper words in Hebrew. "Like 10 hours?" I say holding up my fingers. Pause. "Five hours," she hold up one hand. "Including dinner?" I ask. Pause. "Soup."

This painting has been hanging in our living room for years. It's signed Ovadia and depicts the flour mill up the river in the beginning of the 20th century. It's called 7 tachanot. 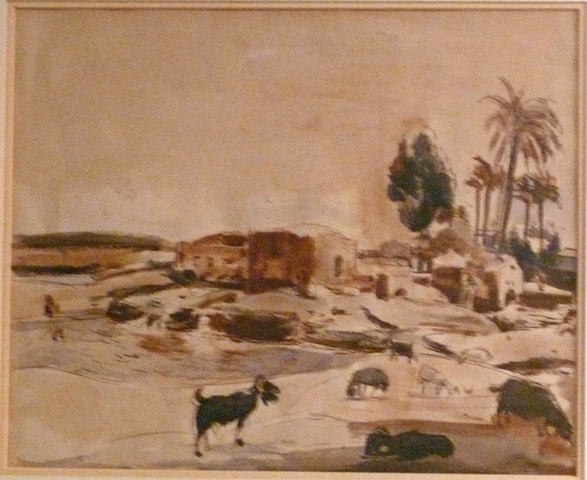 This is a photograph taken by Bandi Gut in 1925 when he did a documentary tour of Israel with his best friend, David Mossenson: 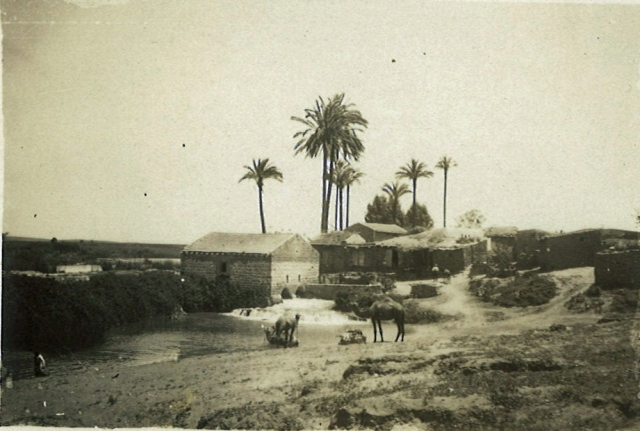 Together they made 2 copies of an album of 90 pages documenting the country. But Mossenson was murdered in 1933 along with two other men - Not only is the park in the Sachne named after them - the park of the three (gan hashlosha) but my husband was named after him (until his grandmother got upset that he wasn't named after Grandpa Ezra) so his name is Ezra David.

Ezi's scanned them all and working on cleaning them up.

Now that the US elections are over we can go back to our own dirty politics.