The upside of having a bit of ADD is that you get to see the whole picture and then decide on what to focus. At the beach today there were a myriad of choices. I could have looked down south to Jaffa, up to Tel Aviv. I could have noticed the Jewish families and/or the Muslim families, and/or the tourist families, I could have noticed the couples in love, or the couples who are so bored with each other they have to look in opposites directions. I could have watched the migrating birds or the hang gliders or the little helicopters people were sending up. I could have felt the weather changing every minute or the surfers seeking occasional waves on a placid sea. But I decided to concentrate on my son and his birthday. And it was worth it.

and in yesterday's paper the first glimmering of interest in the Galapagos book: 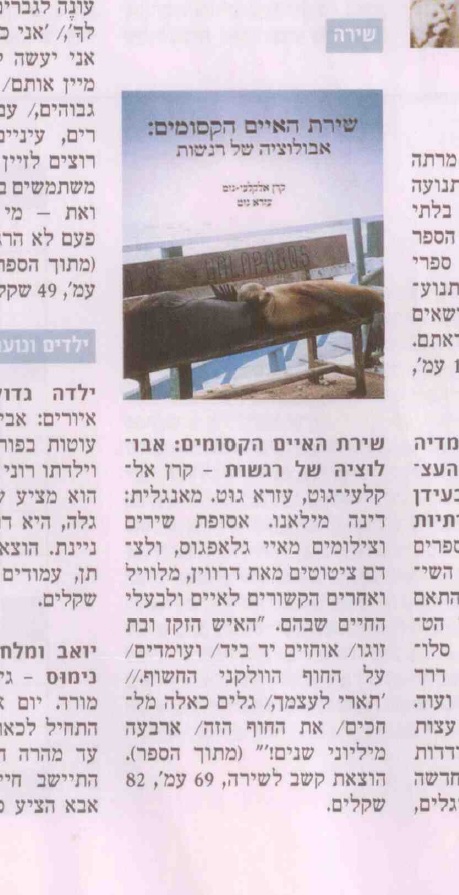 It has been a great pleasure not to see the news today or yesterday, not to read the paper, and not to pay attention to all the stupid things we've been doing in our government. I've been busy.

An image of Mark Strand keeps coming into my head. He has been gone only two days and I can't seem to overcome the loss. With Galway Kinnell dead only a few months before it seems to me that the most striking poets who influence so much of my writing are now lost to me. It will take me a long time to digest this loss.

Of course all personal dilemmas are exaggerated by the total chaos in the political area. The threat of elections, with the results orchaestrated in advance only to create a political future for the prime minister but causing massive devastation for large proportions of the populations, demands an escape to chemical intervention.

bRead the story ofOuda Tarabin and then decide for yourself if you want to contribute to Gershon Baskin's effort to save him.

And now the government has collapsed and we're going for elections. Maybe it will lessen the pain, but it could get worse, much worse. The coalition that Bibi is planning now is far more frightening than the non-functioning one we have.

Why are we having elections? Bibi fired everyone so he can pass all his crazy laws even before the elections. So now we'll have no reforms, no medical overhaul, and lots of religious protection and racists bills.

on another note - here's my poetry part from last thursday's poetry reading. more to come: