Indeed, I have been influenced by foreign germs.

You know i would have stayed in touch had only one of us - me and my computer - had a virus. But both of us are struggling to continue under difficult circumstances.

Anyway the rest of the country seems to be concentrating on three people i'm not crazy about exploring further - The escaped rapist Benny Selah is one of them. There is even a computer game - find benny selah - you see a reconstruction of tel aviv and then suddenly benny selah appears and you have to move your mouse to him before he disappears again. As if that is our biggest fear and it is now being transformed into a manageable size, a computer game. Me I'm focusing on the songwriter and columnist Eli Mohar who just passed away. It has been years since I saw him, but he did a very good deed for me once and restored my faith in humanity at a time when I was in great need.

THE JERUSALEM REVIEW IS OUT at last.

There's a new site about Israel. ISREALI. It gives you something of the daily life, national aids day, restaurant, etc. I haven't really figured it out yet, but it looks like it may be promising.

Maybe we're in trouble in the long run, but it's Lebanon I'm worried about for the moment. I gave my good luck charm to my nephew who has needed it badly for the past six months, but I'd be happy now to have it here and to direct it to Beirut. If it works for there maybe it will work for us a bit later. But if Nasrallah takes over Lebanon - imagine - if we survive we'll be wearing burkas.

I was looking for old pictures of Robert Rosenberg. Here's one at the Brasserie 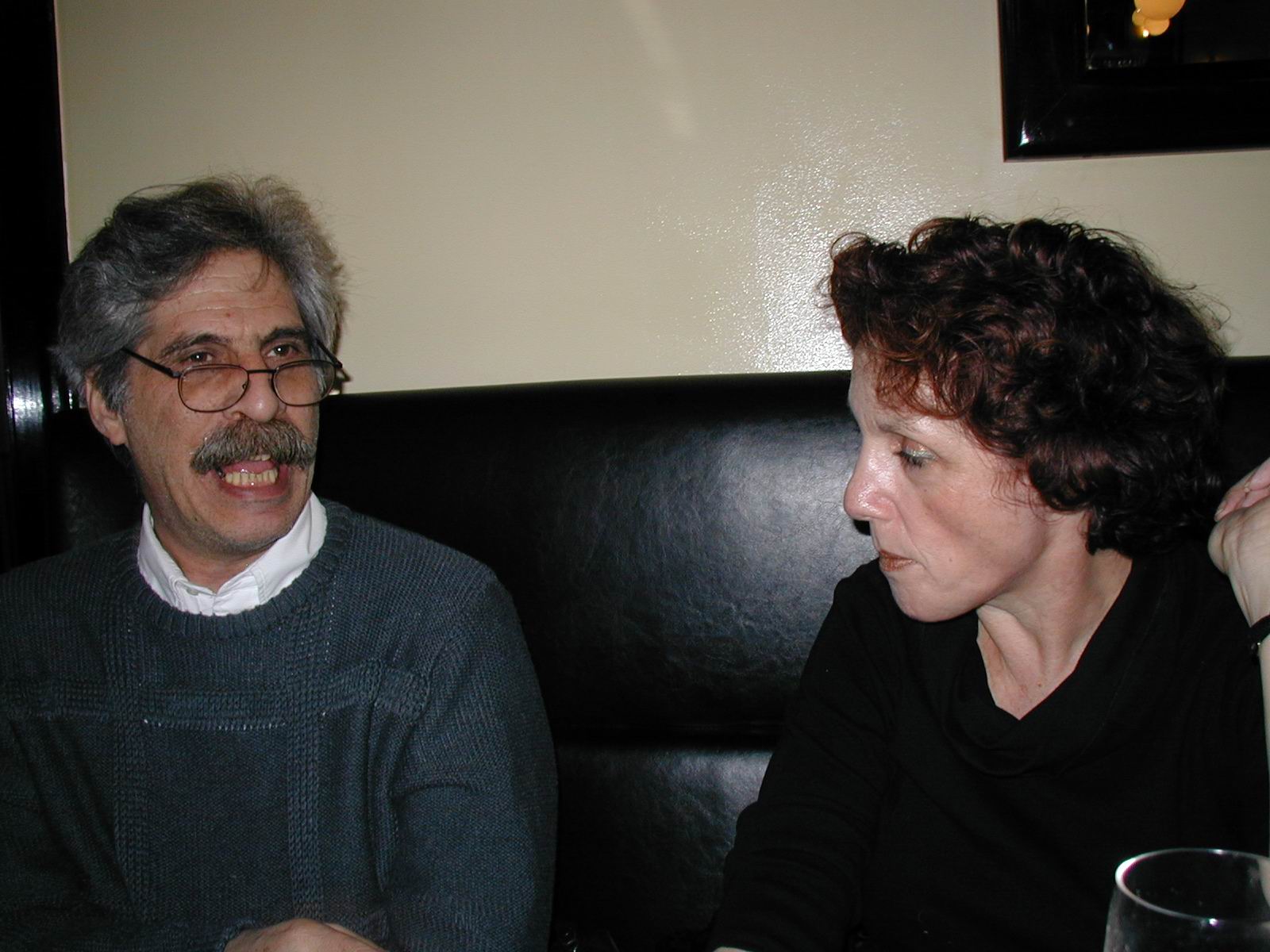 And one with Sylvia at the peace demonstration two years ago 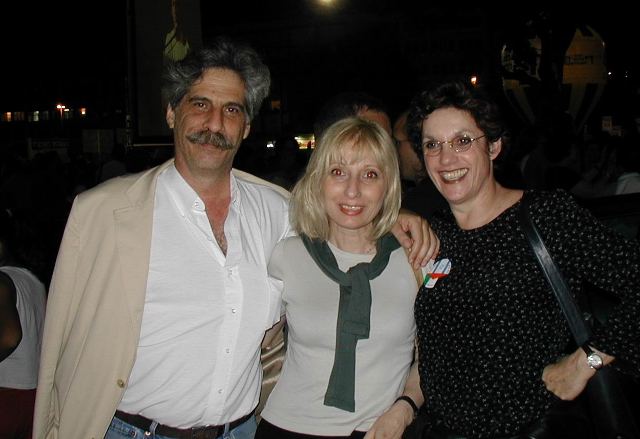 And then one at the peace demonstration in 1998. 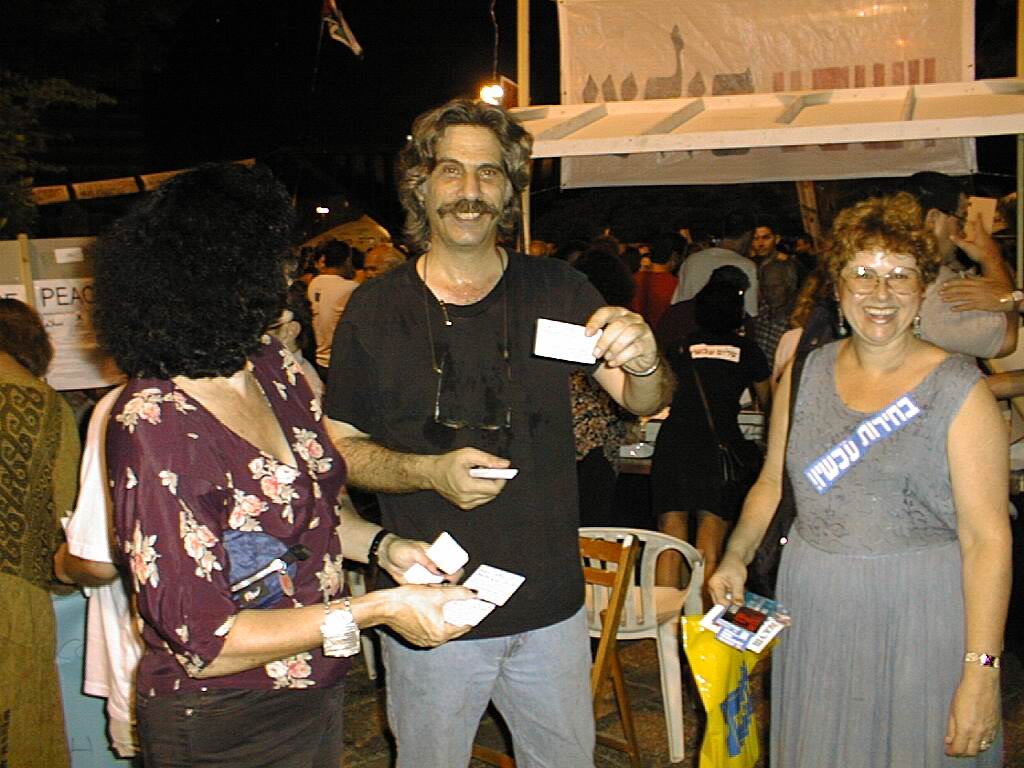 And then one of us from then. 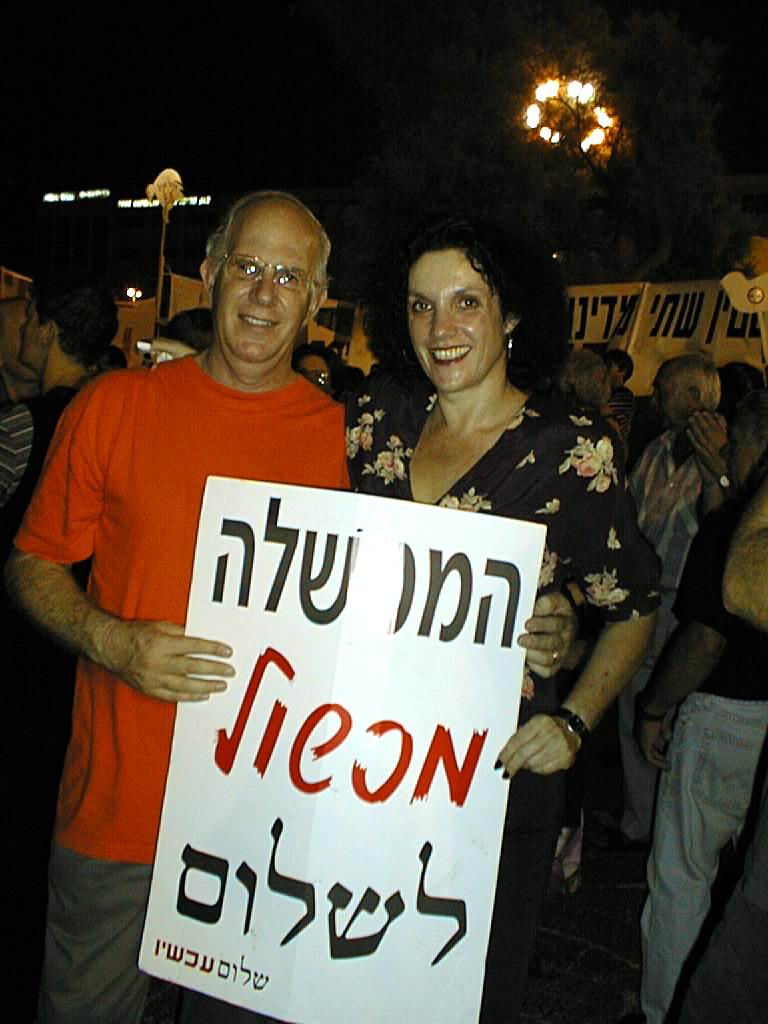 It appears we are obsessed with a kind of sick sex - sex offenders, sex crimes, sexual harassment - (there is even a guide in today's yidiot for chatting girls up in the office while avoiding possible harassment charges) while the more imminent but equally sick thanatos we ignore.

Something was wrong with the truck driving up my street. It had the usual microphone on the roof that was shouting out "Alte Zachen," but something was different. When I first came to Israel there were old men with carts calling out that they buy and sell used clothes, "Alte Zachen, Alte Shich." "Old things, old shoes" they'd cry, and I was full of nostalgia that Yiddish was alive on the street. Then, after over a dozen years I began to notice that not only did they have trucks, they also had Arabic accents. I sold our old television to an Arab guy who was advertising "Alte zachen" back in '87. And today it came to me. The guy calling out was Jewish. Moroccan, with a black skull cap. But Jewish.

Where are all the Arabs? Today a number of cases of extremely prejudicial behavior came to light - the treatment of Arabs in airport security and the behavior of the mayor in Ramle - for example. It makes me feel a bit better that these things are coming to light - in a way we've known about them all along, but want to believe that the rumors are exaggerated. When it appears on national news, there is hope for change.