I don't know what's going on in Israeli kitchens! Here I was settling down to discover a few sitcoms on one of the cable channels, and all i could find were cooking lessons. I HATE COOKING LESSONS. And the only alternatives were programs about trekking. Another one of the things I hate. If you're going to cook, cook. If you're going to trek, trek. And shut up about it.

Seriously folks, the programs are going down the drain. The classic movie channel has disappeared, the 10 or 15 under-thirty tv stars that appear on every channel in every role are driving me mad, and all i want are some good news, some decent comedy, and a drama or two. I'll have to take up reading again. 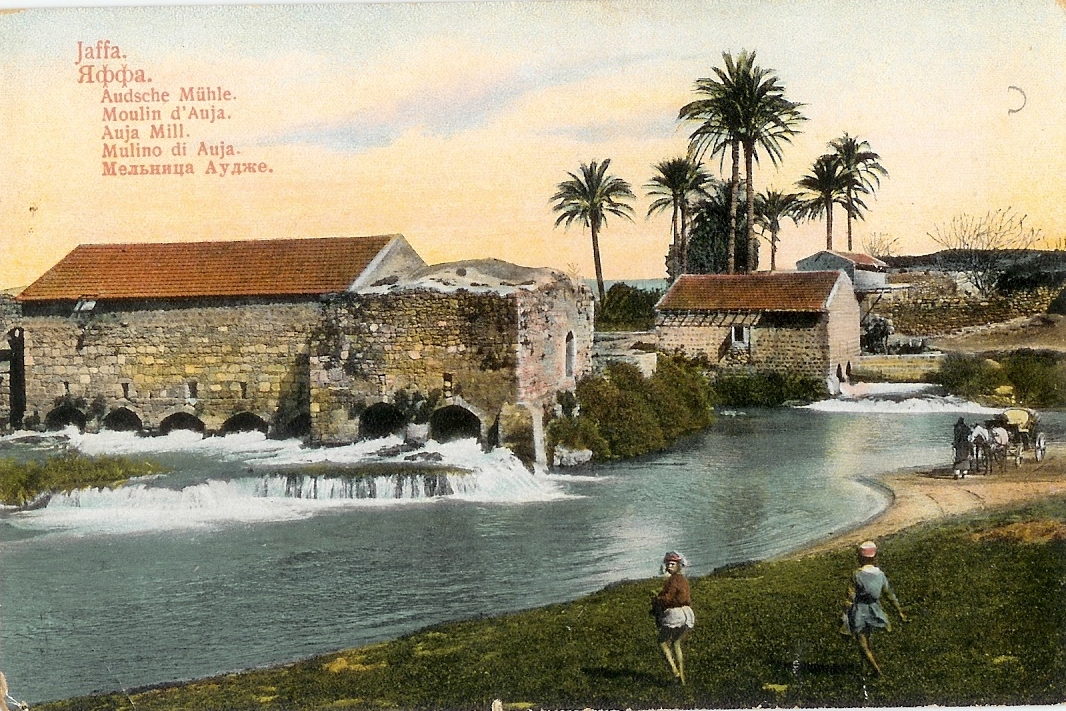 Or at least it's what the turks called Jaffa. It's the seven mills further up the Yarkon River.

I don't usually say anything when I update the translations on this site, but I like this one so much, I'm putting it here too.

Another day of sitting in the hospital and being grateful for the doctors. As usual I note with surprise the number of prayer books and psalm books on designated shelves in the waiting room, and the people praying quietly. Dina, who has been with her son for almost a month now in places like this, once expressed her wish that she too could have enough faith to pray, to relieve the horror of the present. The hospital Iím waiting in now is Assuta, the tiny hospital in the middle of Tel Aviv where my husband was born, where I accompanied my in-laws through numerous operations, and where I too had an operation 8 years ago. The other two operations Iíve seen others through this year were at Herzlia Medical Center and Ramat Marpeh. These are all minor, not for life-threatening procedures, as far as I know. So the patients look like theyíve gone through something, but they seem pleasant, relieved. There are a large percent of patients here who donít speak Hebrew.

Because this is not a health-insurance place, there are a lot of private customers who speak on the cellphones a lot -- everything from Arabic to Portuguese. Once I was sitting with Ezi and my bedridden father-in-law ñ we were facing the hallway and talking about deep and solemn matters of life and death, when all of a sudden through the narrow doorway we saw a little boy ran past. He was wearing a hospital gown and his head was all bandaged, but despite his great pallor he seemed full of life. We watched him run past and then watched a group of older Arab women run after him. It was like a Chaplin movie. Then he ran back down the hall, stopped at the doorway, stooped, defecated, and ran off. The women arrived at the spot and stopped in their tracks. ìShu Hada?î one asked. ìWossach!î said an other, and the third shouted, ìWossach Ktir!î ìWhat is it?î ìFilth!î ìGreat Filth!î For some reason our black mood passed and ever since then, if I say ìWossach Ktir!î to myself, it lightens my spirit. This is probably what Wordsworth said when he talked about ìspots of time that have a renovating virtue.î

The disengagement has dropped out of the news ñ no longer seems to interest anyone, but most of those people are still displaced, and terribly in need. Should you wish to help them out, go to:All for Israel.

And now I seem to have caught a stomach virus from all those nasty sick people in the hospital, and have been spending the past few hours between the toilet and the bed. Just got up for some maalox and discovered that vertical is better.

And I've been wanting to tell the latest chapter in the story of Tel Aviv cats. As you devoted fans know, I have been very impressed by the transformation in the Tel Aviv Feline population since people have taken over the role of garbage cans and started feeding them themselves. On every street corner there is always some devoted cat person coming out twice a day with a sack of food which is distributed in small piles so each cat has a chance at vituals. And now the city is trying to outlaw cat feeders. So if you live in Tel Aviv and want to sign a petitition against it, go to Catsuma and leave your name and address. It's not that I have a thing about cats, but I do have a thing about life, and strongly believe that the way you learn to treat animals is also the way you treat humans.

Here are some locals - 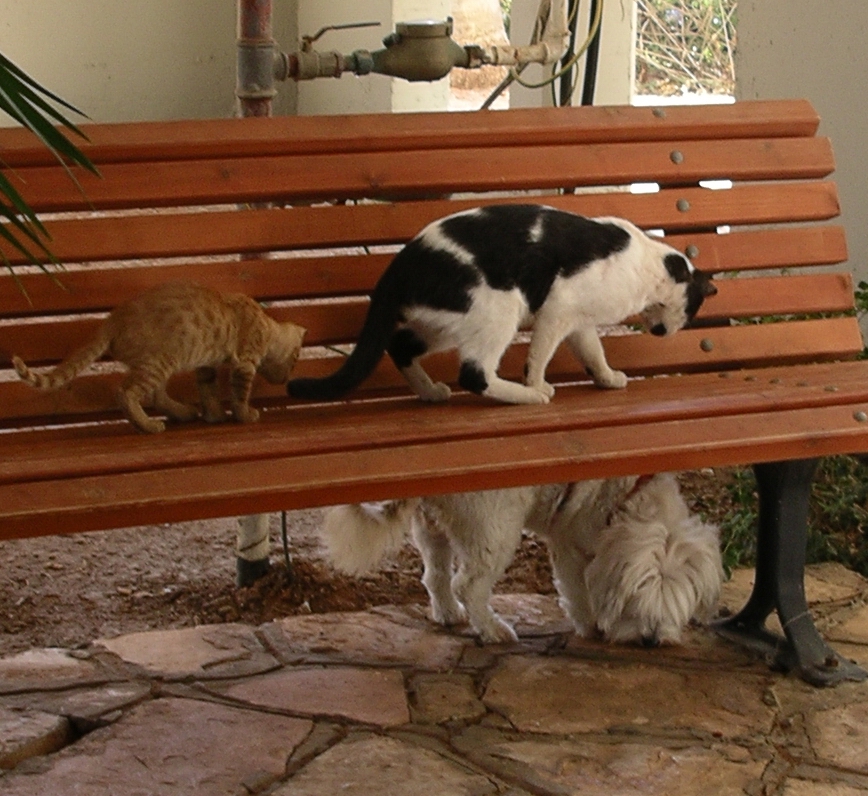 Shusha doesn't even know they're there and they... 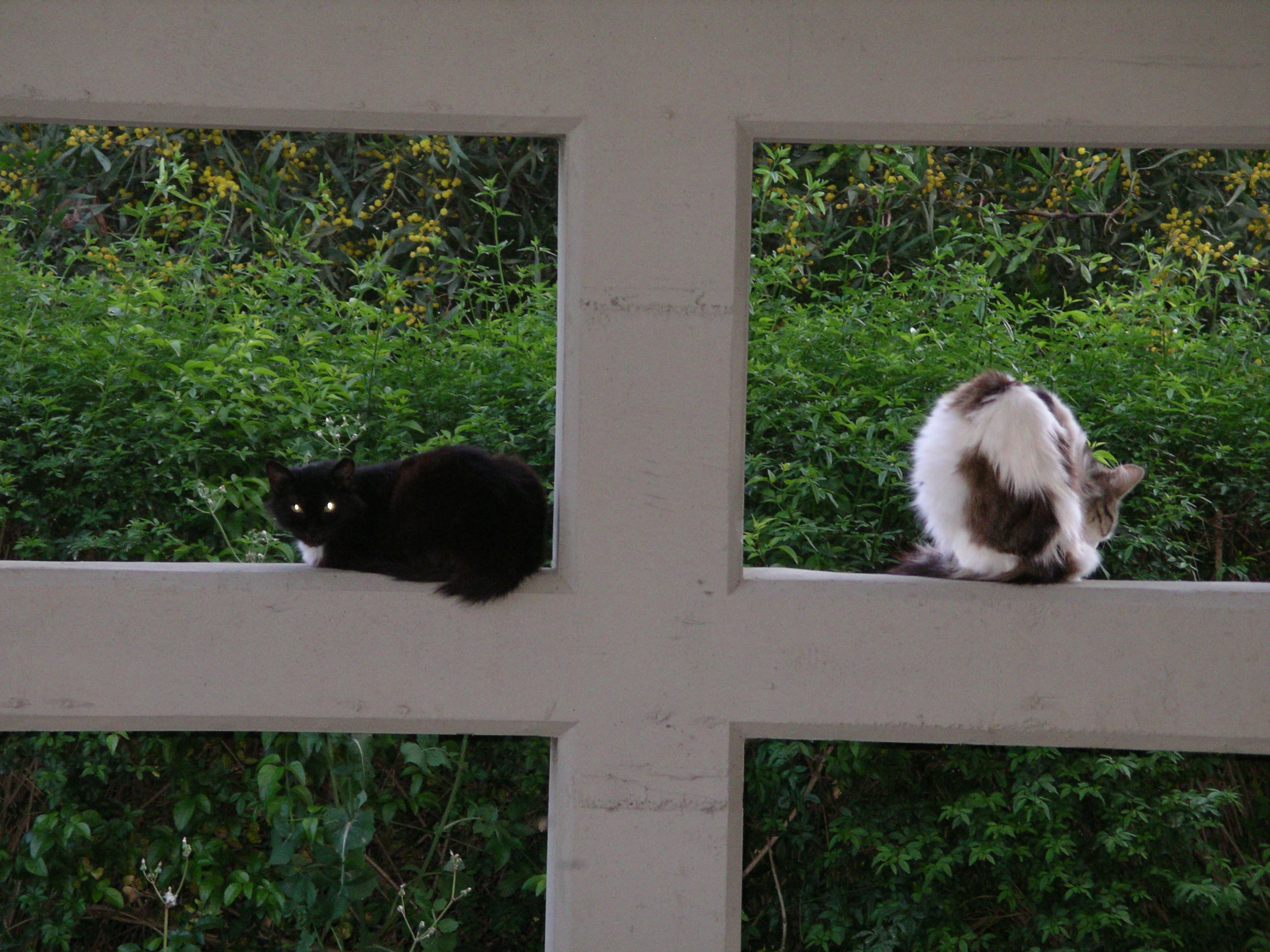 sleeping on a summer afternoon.

People are talking politics again. It used to be the main subject of conversation on Friday nights, but in the past 3-4 years has been too painful to discuss. Now, we try to figure the odds on who's going to win and what combinations are possible. One thing is sure - our minister of education, or "Hurricane Limor" as Yossi Sarid called her yesterday, will not be back. Of course the damage she has inflicted is irreversible, the brain drain, the disintegration of the universities, a whole generation doomed to illiteracy....I could go on and on...