Indeed they are miraculous!

Hamat Gader Only I wish they'd given us more information. For instance - are the baths bad for cancer patients?

The signs say the waters are good for eveyrthing from reducing blood pressure to burning calories! could this be true?

This is what I wrote for Trip Advisor:

This may be one of the best places I’ve ever weekended. The thermal baths, known from Roman times, are magnificent, and the cottages, clustered around thermal books, have their own mineral water double Jacuzzis in addition to the other usual comforts. The water is hot, and even when the air is cold, it is simply an exciting experience. The spa itself is extremely comfortable, with wonderful breakfasts and a choice of two restaurants for dinner (We preferred the Blue Bar to the Siam Restaurant but the food was good in both places) with service by the pool. Massages, gym, nearby attractions, and an extremely peaceful atmosphere, make the Spa Village at Hamat Gader a perfect place to get away for a few days.

I can't believe no one's written about it. It is like heaven. The steamy suphur falls 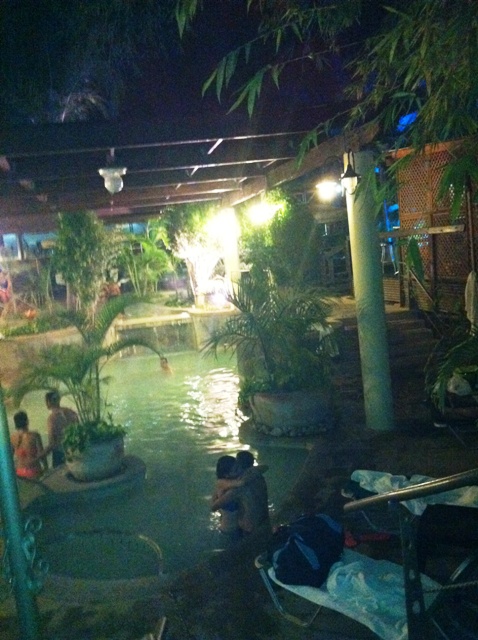 But even if you don't go to the private spa, and just come for a day to take the waters in the proletarian pools... 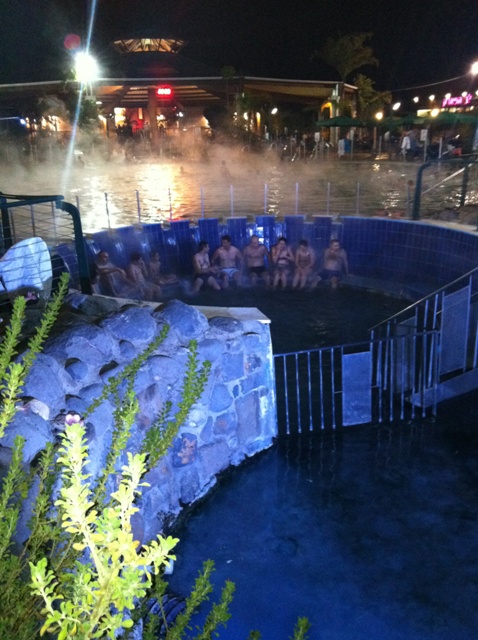 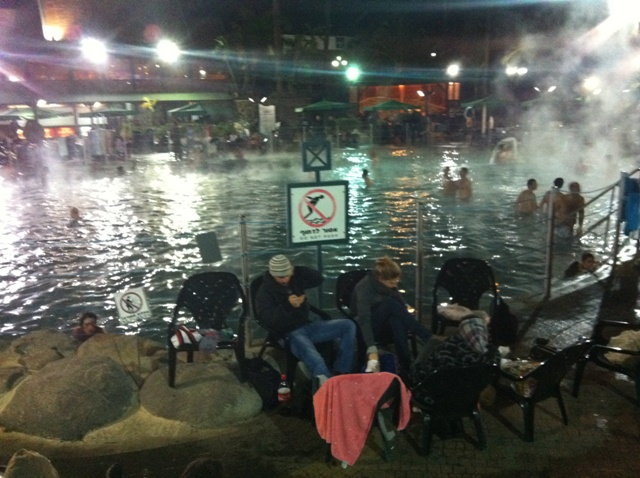 It may be too hot in the summer, but in the winter, it is pure health.

Unfortunately, we had to end the weekend a few hours early and return to Ichilov, where I spent the morning chasing files.

Before I forget this experience entirely, as new things happen, here's a tragic photo of me in paradise. 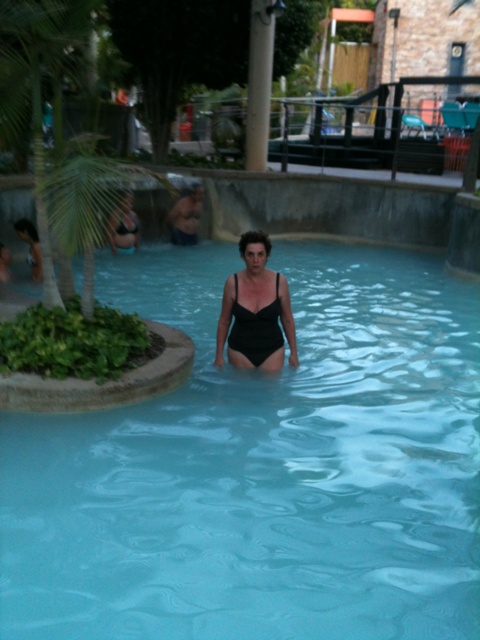 Whatever happened to the principle of shrinkage?

(I mean why don't I look thinner in a wet bathing suit - like George looked smaller) November 28, 2011

Fell asleep as I was writing last night and didn't save it. So I'm starting again, but the immediacy of my reaction is lost.

"The Suitcase Packers" by Hanoch Levin. It was at the Cameri Theater We knew it was going to be good - so many accomplished performers involved in such an important production. So we made the big effort - after the visit to the vet, after the optician, after the health clinic, etc. And the theater is so welcoming. Even though our seats were in the narrower row, 7, and we were on the side. In the seat next to us was an elderly tourist who noticed immediately that the only subtitles were in Russian, and realized she would have problems following. I didn't offer to translate for her, but worried she'd miss the play. But after the curtain she was smiling broadly. Even though the text is complex, the slapstick activities that the script demands, and the variegated repetitions, make the principle clear. Everyone's going to die so make your life worthwhile.

Levin draws quick, superficial, outlines of characters who are comic caricatures, but come together to create profound portraits of of the depth and pain of life.

30 years ago, in this very bedroom, I woke up to find a burglar. I was too excited to scream but my weak croaks woke up Ezi who jumped from the bed to chase the escaping form who had just grabbed Ezi's briefcase. Ezi didn't get far because he couldn't leave the house naked, and the briefcase was recovered a few days later, so nothing really happened, but I've never been totally comfortable ever since. The 'break-in' then was the result of an open window I'd forgotten, and although many neighbors of mine have been burgled, we've been okay.

So today we put bars on our windows.

How's that for a quick reaction?