There is nothing in the literary world to compare with the meetings between Arab and Jewish writers, especially poets. Both groups have limited audiences, similar experiences, a common culture. So the reading in Nazareth was like coming home, like finding old relatives.

The Writers' House in Nazareth, part of a cultural complex, refurbished and beautiful. It is the only building in the country to my knowledge, since the building of the Hebrew Writers Association in Tel Aviv has been reduced to a shambles, and seems to give a sense of centrality and significance to the writers. I left my camera home so will have to wait until next time to illustrate this (Although Farouk Muassi, who hosted us, has promised me photographs this week).

Almost all the writers were fascinating -in their subjects, their style and their delivery. Almost all the poems were about love, understanding, hope. Even though my Arabic is pretty poor, I understood almost everything. Taha Muhammed Ali crowned the reading with a rendition of Revenge.

Faruq Muasi in the foreground, Haim Nagid in the background, me in the middle. 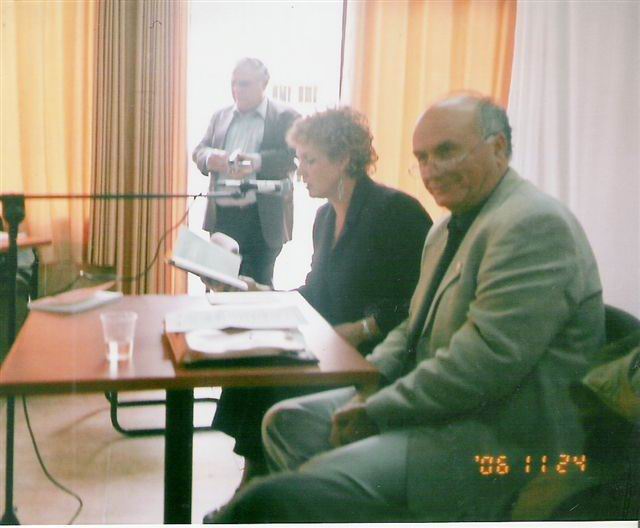 Haim Nagid is responsible for forming and directing the Union of Writers in Israel. He has been very active in promoting literature and literary events and shared organization of this event with Muasi.

It would have been Robert Rosenberg's 55th birthday and instead it was the 30 day memorial. The fact that the party for him was in the hip port area of Shablul didn't ease the pain. I was thinking of how his Ariga updates to which I have constantly referred in these pages, that always gave alternative views, will never be replaced.

How can we all not rejoice that there is a ceasefire? Even though for all we know it is a tactic to re-arm without interference. We should really be getting the writers and the artists in to make a real peace.

It really should be a banal experience - and for most people it is. I took the train from Ramat Aviv to Yavneh yesterday, and since it was the first experience I've ever had,it was very exciting - just like being abroad. Europe, not New York. My trauma with public transportation is over. I will be using the train much more often in the future.

We are very very busy with the escaped rapist. SinceFriday morning that's all we talk about. Now I don't mind our escapism, our joy in finding tangential issues like sexual harrassment cases, but this is more than escapism. By terrifying every woman in Israel, the television has managed to return its ratings. Arming women with mace and teaching self defence courses but not scaring them - empowering and not terrifying - would be a better idea. Not just for women but as a general policy. The more we learn about how to deal with the lousy situation we're in, the more empowered we are.

Robert Whitehill - who I hope will allow me to quote him - pointed out that there are two escaped rapists - Sela and Katzav. There is certainly something in the fact that we are having a real surge of accusations of rape among people in very responsible positions. And it of course has nothing to do with sex, but with power. The abuse of power characterizes much of our leadership in a number of ways. And the leadership has been able to get away with this because we have been passive, preferring to throw up our hands and wish we had better leaders. And self empowerment, taking responsibility for trying to change this abuse, is the only way out.

But I seem to be coming down with something Ezi brought back from his voyages and can't think straight enough to do this subject justice.