The link for 100 thousand poets for change is here

the videos are small but they're on youtube. look for them on 100tpctelaviv2019.

we are waiting for the nightmare to end, for us to have a government, for an end to the hatred that has taken over our lives. mine too.

i find nerves and gratuitous anger in the most unexpected places. i turned right into a right lane, and the bus driver in the left lane started shouting at me as soon as we hit the next block and the traffic light that i had just endangered him. the light changed and we went on. but on my way back i checked the site with an expert and i did nothing wrong. he had been so red in the face, so upset, so shaking that I had thought i really had committed a violation. i wish now i had been more secure at the moment and photographed and reported the bus.

But I was on my way to a flu shot and was nervous because everyone i know who had one got sick the day after.

We awoke to 30 odd rockets over Israel. Everyone warned to stay home. No school, no work, an eight-year old girl seriously injured. of course we started it - killed a jihad leader. but of course our aim was to get rid of someone who is attacking us (and screwing up Hamas' plans) and of course we aim not at citizens but at a military target. they tried to bomb Tel Aviv at 8 a.m. when the kids were supposed to be going to school. School was cancelled at 7:20.

just to go back for a moment: Jereis Khouri made a great effort to come from his village in the north, no - from the hospital where his son was undergoing some treatment - to make it to this evening, and he made me the happiest with his presence 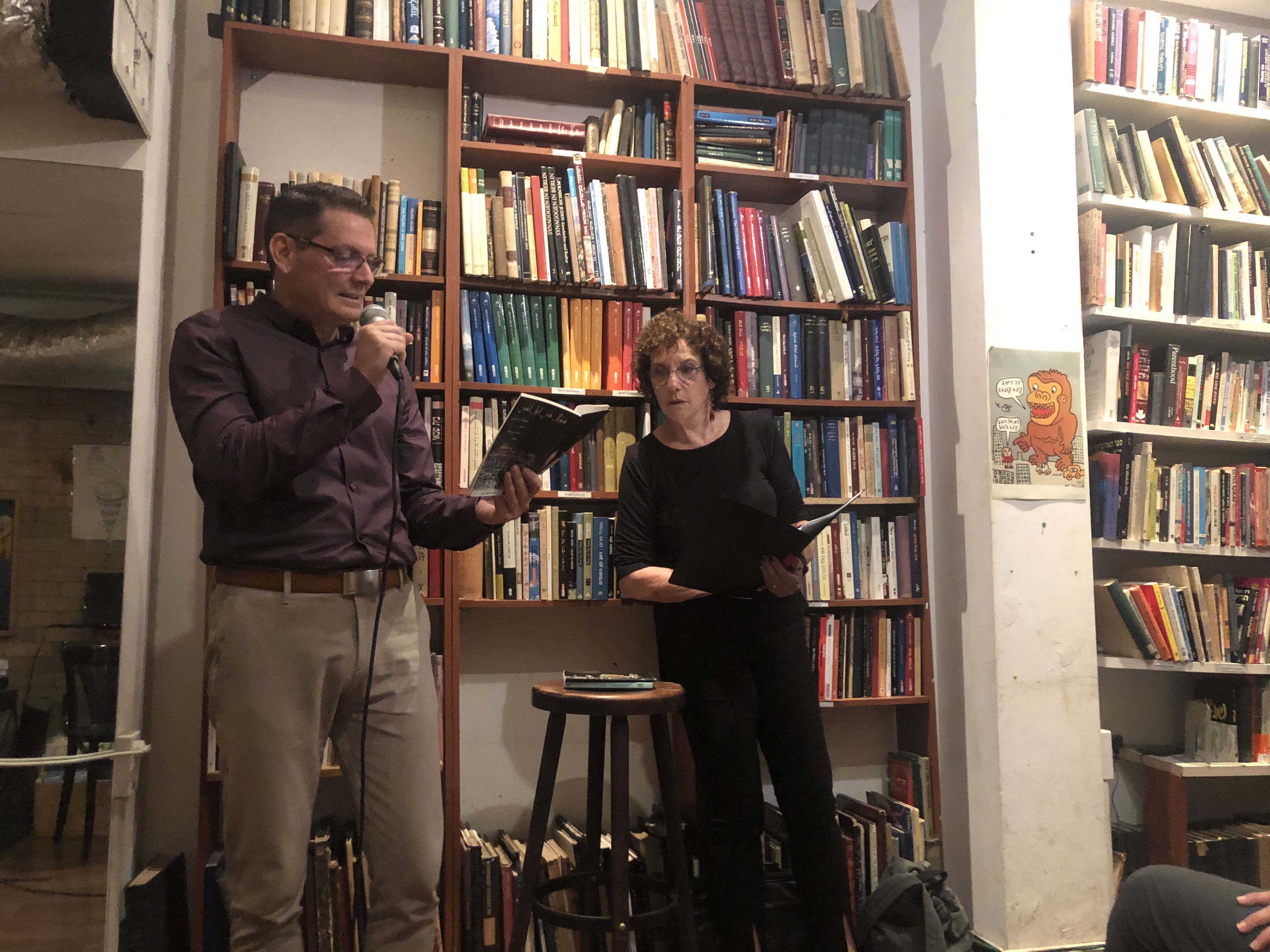 back to the rockets - moving close to 200 rockets today - a few on tel aviv. do we have a concert tonight? i doubt it. but it was supposed to be Britten's Requiem. a little too scary for a day like this.

Clean underwear., shoes and bag with flashlight and batteries and radio near the door - it looks like a tough night ahead, and maybe tough few weeks. keep posted.

Of course I've read Shakespeare and know that Bibi must have at least heard of Henry IV and the advice he gives to his son before he becomes Henry V:" Be it thy course to busy giddy minds/With foreign quarrels, that action, hence borne out,/May waste the memory of the former days. (Act III,iv, 361-375). I know the action of killing this guy wasn't wrong, but timing is perfect to make it impossible for Ganz to form a government now. How can the Arabs join in when we are bombing Arabs? Even if the bombing is so perfect it blows apart a single apartment in the middle of a building and is only killing Jihad leaders (at least that's what they're showing us on tv). even though we're making it easier for Hamas to control the future shelling of israel. the maneuver is transparent but impossible to overcome.

oh, and it seems we've decided there will be no more rockets in Tel Aviv for the time being. The shelling in the south continues, however, and I've counted well over 100 today. unfortunately, Iran has provided Jihad with thousands of them, as much as Hamas has, and i think they operate the way the Germans did - individual units make their own decisions.

So we seem to be 'back to normal' in our neighborhood, with the usual traffic jams. Only the guys fixing the street didn't come to work today.

Me, I'm planning for Oren's return in the only way left to me - shopping for food. and cyclamens.

My mind is on Oren's arrival tonight. But the rockets today - after the cease-fire - unnerved me. Not that I should have been surprised - there are always rockets falling on us after ceasefires, always attacks on citizens. always when kids are in school, or on their way. we pride ourselves in the meantime on the specificity and accuracy of our attacks on terrorists - with as little collateral damage as possible. never the less, it's impossible to igmore shakespeare and the warning of Henry IV to his son, soon to be king: @be it thy course to busy giddy minds with foreign quarrels, that action, hence borne out, may waste the memory of the former days. (Henry IV, act 4, sc 3.). in our case we have an additional motive - to anger the local Arabs enough that Benny Gantz will never be able to form a government with them.

Today while I was sitting at Rivka's house, i remembered how frightened i was for her during the last war. she would stand in the doorway when the sirens went off. now she's older - almost 96 - and how will she get to the doorway.

she wasn't strong enough to really take apart my clumsy attempts at yiddish poetry today. still she was smart enough to see the mistakes. Rivka Bassman may be almost 95 but she can still see through me.

Morning: a long day awaits me and yet i want to write about the night. As we waited for my son at the airport at 10 it was impossible to ignore the vast crowds of people heading in to the country. Literally droves went through customs - some with suitcases, some with shoulder bags, some with carts like my son - holding musical instruments. someone was playing "Simona mi Dimona," a pioneer song i hadn't heard in fifty years, on the trumpet, and in general the place had a holiday spirit. Holiday spirit while rockets are still falling? holiday spirit while we don't even have a chief of police much less a prime minister? holiday spirit while the enormous government debt is just now being uncovered? what did they say in the shtetl? when jews rejoice, you know they're really in trouble.

As I sat in Benjamin Britten's "War Requiem," the concert that was postponed because if rockets fall on the concert hall, it can finish our entire orchestra and the audience in one go.