It's not quite out yet, but the Jerusalem Review cover is on Facebook already 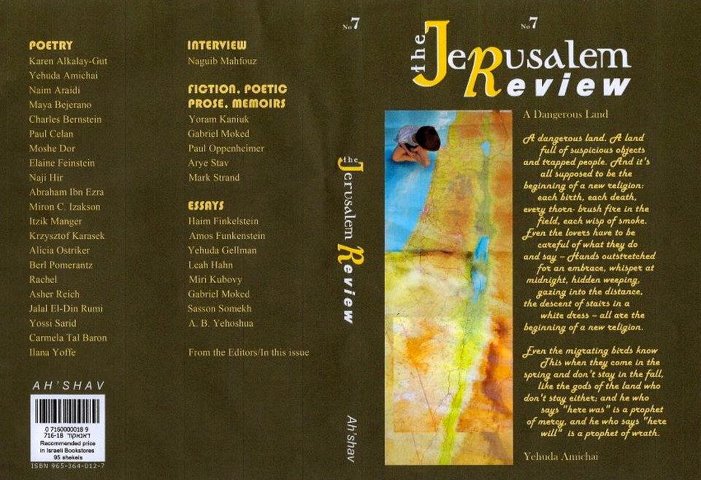 And guess who's on the cover? Amichai!

I translated this poem long ago. How wonderful to see it again.

don't tell anyone but my may 7 entry was sabotaged. every time i sat down to write a little summary of the government collapse so it would make sense to me, someone showed up at my door - a neighbor, a sister-in-law, a pedicurist - and i never got to figure out the computations.

And then I woke and discovered the government was whole. A sudden secret coalition that will keep the status quo. At the moment I don't think it was so bad. But we'll have to see if it's kosher and/or if it stinks.

Even though all of the Knesset is totally up in arms over the sudden entrance of Kadima into the government, the conference on poetry was held today. Hundreds of people came to be part of the discussion over the situation of poetry in the country, even though the members of parliament who were supposed to be there either didn't show up or left after their own speech. I too spoke at this conference, pleading for the revival of PEN, for an office of poet laureate, and the unification of poets of all languages in this country. A lot of good it's going to do us to talk of unity and understanding and support for the arts and education, we all thought, when in the other rooms around us the politicians are totally disregarding all humanity. How did my mother-in-law put it: "We won't let them shit on our heads - we will open our mouths!"

And continuing in the same vein of speechlessness I let Allison Sommer talk about politics for me.

And me, I continue in my old ways, teaching, researching, babysitting, doing the usual chores, watching television without even having the energy to turn down the sound on the commercials.

And now there's real work to do.