While we were wandering around the museum in Tel Aviv, rockets were falling on Sderot again, this time into a house. Thank goodness the family was away.

On the occasion of Lag B'Omer, which i celebrate by sealing my flat so that the smoke of bonfires doesn't infiltrate everything, I present you with a postcard: 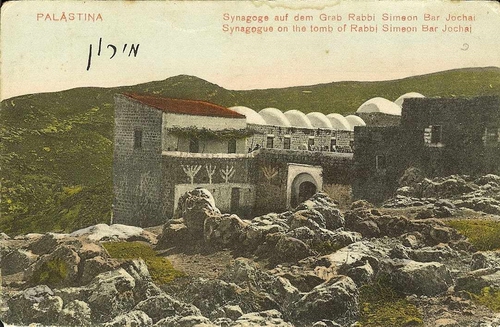 I don't have the exact date of this, but it's before 1927 because it's addressed to my mother-in-law by her maiden name. It's one of the postcards I rescued from her trash can. We took some more recent photographs last year or so, and the whole place around the shul is a parking lot filled with booths for trinkets. I can't find them now. But there are over a quarter of a million people up there tonight for the big bonfire.

I take up the newspaper as Natasha digs into my ingrown toenail, looking for something with more pain than she is inflicting on me. But more remote. Not Olmert as the scapegoat, or Sderot. Those hurt more. So the French elections are a good subject. "Why do they hate Sarkozy so much?" I ask Natasha, "He's not Jewish!" She slips her probe laughing at my stereotypes,and then controls herself to concentrate on my toe. I grab my laptop and look him up in Wikipedia. "Wait! He's got a Jewish grandfather!"

Have I changed my mind about Olmert since the mass demonstration? No. He will have to go if everyone drives him crazy, but I don't think he is at all a different person from the one we elected. I remember clearly the conversation I had with Oren then, when he said he was voting for Olmert. "But he's a crook!" I exclaimed. "Yes," he answered, "But he's OUR crook." Now let him use his crookedness to HELP us.

Turns out I'm the only person in the world who didn't know that Sarkozy has a tiny bit of Jewish blood. I actually think it's his Hungarian aristocracy that's influencing his politics.

But what do I know about France? Just because I was accosted in the metro last time I was there?

Spent the afternoon at a meeting in Basel. Wai wai wai, what a place to shop. Pity I'm such a bad shopper - Almost bought a pair of purple shoes at Shiruzzi but I was late for my meeting. They even carry my gigantic size (Clementine was Cinderella compared to me). I'll have to go back when I'm less depressed about Sderot.

The student strike is slowly become a revolution - The reservists are building power, the only people who aren't doing anything are in the government...

Here are some crazy facts for the day (not of equal significance):
Herod's grave has been found - the one guy every one agrees to hate. King of the Jews he's called and he wasn't even Jewish. Who wants to find his grave? Just because Josephus described his funeral?
In Gaza they are killing children who go to mixed boy-girl classes and are threatening to kill Gilad Shalit (the soldier they kidnapped) if we try to invade and stop the rockets they are firing on Sderot.
"Cracks" in the student resistance are beginning to show - because the university council is threatening to fail for the semester those students who don't show up to class. We lecturers who support the strike are supposed to teach (according to our employers) but are determined (according to our union) to make sure the striking students don't suffer. After a month of preparing classes and exams for classes I'm not teaching I'm only good for retail therapy. So instead of students I meet shoes at Shiruzzi.

Why do I think the students should continue striking? Not only because the quality of the education they've been getting has steadily decreased in the last decade, and students who gave three years to the army shouldn't have to continue to pay to the government, but also because they have allowed themselves not to be taken as a serious factor for years, and if they are broken by these threats they will continue not to be taken seriously. Of course, the same is true for the faculty. We are a joke and so are our salaries.

Now what about Gaza? I think they're Jewish. They are a only tad more self-destructuve that we are. The only real difference is their spurious destruction of others.

P.S. Ehud Netzer (some second cousin of Ezi), who found Herod's tomb, has been researching Herod's stuff for years. Long ago when the family went to visit one of his sites in Jericho, the kids discovered some ass's jaw and began screaming "we found Herod's teeth!" Small world.

Ehud Netzer, by the way, is not only Ezi's relative but the son of Pua Ben Tovim, who taught Kafka Hebrew but spurned his weak advances.

In the swamp that is our political system every new day brings a new scandal. And the worst part is that we recognize most of the newly uncovered scandals as integral parts of our daily lives. Like the latest scandal about 'machers' for example. A macher is someone you hire who knows the government institution with which you are embroiled at the moment and can facilitate your progress in some way. Maybe he knows someone who knows someone who can fix your problem. Maybe he knows who to bribe. I even heard of a macher who was paid to find the case of my friend on the clerk's desk in city hall and put the case under the big pile of cases. He would do this regularly, like every month. And the case rested like that for years. Hell you can even pay someone to go down to city hall at 6 a.m. and take a number so you don't have wait too long.