We hung up our flag today. If only to honor all those murdered in terror attacks and fallen in the wars.

Today Assi Dayan was laid to rest and today is Yehuda Amichai's birthday. 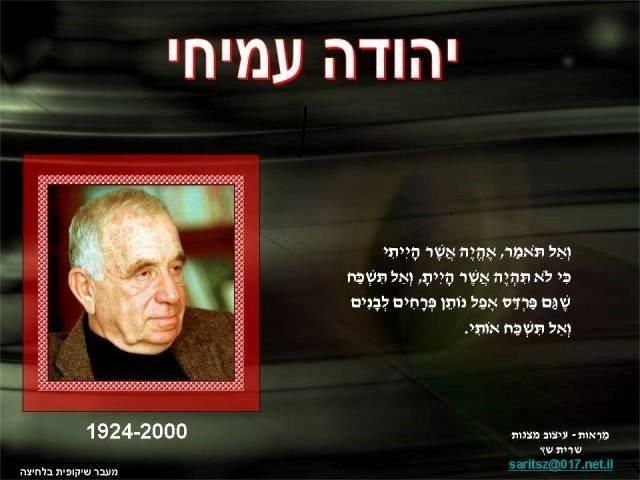 Even at home I stand at attention when the siren goes off. Even at home I don't feel separate. But this time i started obsessing about all those people who disappear in this country. there are a number of people who just leave their homes and never return. Since the only way out is essentially by air, or strict border control on land and sea, it's impossible to just go away. without some record. My friend, who usually spends the morning in the cemetery with her son the soldier, got angry with me for even thinking about that when there are so many dead, but they seem to be part of the picture.

While you're zipping through this, try listening to this:

Wait! We have moved from mourning to celebration! Remember the song Tzena Tzena! "Come out, girls, and join the British Army. A recruitment rally in Tel Aviv during World War II. The banner reads: "Hebrew woman, your sister the soldier is calling you."

I love exploding myths. It doesn't mean I don't go for them. There was a classic Israeli song we were singing tonight about a Finjan and how it boils on the campfire. The assumption is that it is a coffee pot - for Arabian coffee. But the name in Hebrew comes from a misunderstanding. A finjan is a cup - for coffee. But when the host served the early Israelis coffee they would pour the coffee from the pot to the glass and say "a finjan of coffee," so cup and pot got confused. Anyway I sang the song with as much as enthusiasm as ever. And Bab El Wad and Reut and all the others.

Chaotic family lunch with happy birthday sung to the state - it deserves a prize for having managed so far.

We are so used to talking with strangers, I wonder what it would be like not to treat everyone on the street as neighbors. Today in a below-ground sidewalk cafe on Balfour Street, the baby began talking to the dog on the street level. She's been doing this for a long time before she turned the corner of her first birthday, but now she can walk and talk a bit so we have less control over her relationships. Within a half hour we were all carrying on a conversation together - the dog, the owner, the lawyer the owner was discussing his upcoming case with, the baby, the mother, and me.

Then came home and saw Mira Awad had presentation on TED

How wonderful! She's an amazing singer, an amazing performer, a wonderful actress, and I love everything she does. But there is one little thought I had about her note about having trouble finding an apartment in Tel Aviv. She says the first apartment she wanted when she moved to Tel Aviv was off limits to her as an Arab. I do seem to remember that one student of mine once had trouble with her landlord because she was Arab. But I don't know if that holds true today. And Mira Awad has been living in Tel Aviv for at least seven years - I've seen her. So she's talking about... when? when Tel Avivians were traumatized by daily bombings? It must have been awful back then. Is it hard to find an apartment today? I wonder.

We were in her village last week. The view is gorgeous. I wonder if I could get an apartment there...

All our lives will be better when we can all live in each others neighborhood and speak to each other. Like the baby today and the dog, we'll encourage the others at our table to join in with the conversation.

Anyway I love Mira Awad and wrote about her at least once eight years ago in these pages.

My physiotherapist says there is no escaping aging. She lives next door to a shopping center where there is nothing for anyone over twenty to buy. What does this mean about how we are accepting aging. I don't mean us as individuals. I mean the country. Maybe not aging - maybe growing up. Sometimes we forget what we were like when we were young. How we never got any opportunities to meet Arabs because there WAS essential apartheid - not because of discrimination but because a state of war was palpable. The situation has changed incredibly.