The heavy hamsin lifted and the sky is as blue as if there had never been a brown lid over our city. As though we can all see more clearly. Me, I see some pretty amazing hummingbirds from my window, but my vision is purposely limited to what I see before me. I am not thinking of the rockets that come regularly from Gaza, or the ship heading toward Gaza (why do we just let it go in there? They're already armed to the hilt and just mean to do us harm. What's a few more rockets and fertilizer going to do?) I am not thinking of the religious divisions, or the fire yesterday in the north destroying all that wildlife. I'm just sitting on my porch, sucking on a straw, and enjoying the fact of a Friday afternoon. There is Vision and there is vision.

"Don't you get this little flotilla thing?" my friend says, "They're playing the Exodus card!" My friend has a theory that every Jewish 'success' story is being reproduced by the Palestinians. Nakba=Holocaust Day, etc... "You let these boats in to Gaza, they'll be coming in by the millions!" He says. Well I'm no British. But I don't think the flotilla has the same motivations as the Jewish immigrant ships in the 40's. In fact, I'm pretty sure that the people behind the Turkish backers of this little escapade are El Kayda, but who am I to complain? I'm just someone born in London because my parents were turned away from Haifa port by the British and sent back into the arms of the Nazis.

Think the guys on the boat towards Gaza are going to try to find out something about Gilad Shalit while they're there?

It was just a thought.

Okay, so my worst fears come true. We're not prepared, we haven't done our homework on who's in what ship, and what they're planning. We decide to enforce the blockade (remember Kennedy? remember Cuba?) in international waters. We send these guys in who are expecting peaceniks and get attacked. They turn up the heat, all hell breaks loose.

I woke up to it this morning, like when a nightmare comes true. 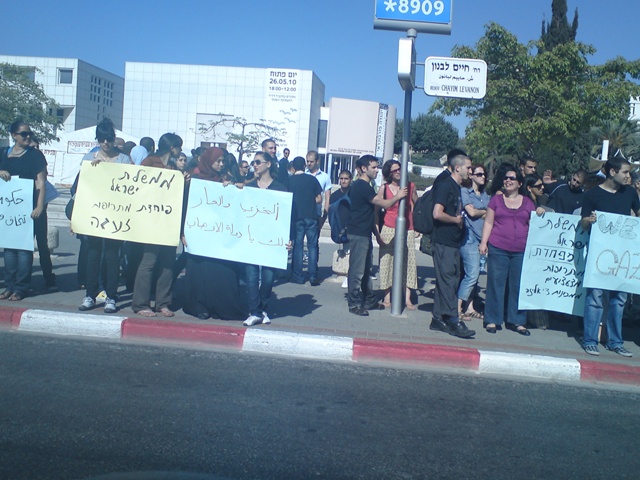 I don't like the blockade but these things are not so simple. I don't think the soldiers could have behaved differently once attacked. Of course I would have put rice in their tanks and not boarded, since it's clear that the flotilla can't be the ones determining what goes into a country, especially a country that's throwing rockets at us all the time. And they certainly can't be the ones setting the precedents. But because there were so many different people on those ships, with all kinds of different goals, much much more care should have been taken. Nevertheless, I repeat, El Kayda and Iran were running this show.

in case you need commentary

The guard stopped me at the gate of Bar Ilan University today with my trolley. "Should I open my bag? I asked. "We do things differently here - just show me some identification. He didn't see I was an invited guest, so I showed him my Tel Aviv University card. "Ah, you had a big party there yesterday!" he said. He was referring to the demonstration so I pulled out my cellphone and showed him the picture above (above the film footage). I had other pictures too - five policemen across the street. That was it. He had heard of a wild encounter but I had been there and seen almost nothing.

The Exodus?Come on, there is nothing to compare. A boat full of refugees with nowhere to go, no food, no knives, no weapons versus a boat with a bunch of terrorists with iron rods and a cover of some naive peaceniks. Come on. Nevertheless, I would like that blockade re-evaluated. First off I’d like to have them stop throwing rockets and sending terrorists over our way, and then i’d like to know exactly what’s on that list of forbidden products and why, and then I’d like to know who has all the swimming pools and villas I keep seeing pictures of in Gaza. Then we can begin.