The 60 Minute program here continues to disturb me. Even though it is in large part true.

We have a great hedonistic city and this is clearly the gay capitol of the world. But we also began the world-wide protests last summer. And even though people had a good time doing it, it was serious.

But this has not been a great holiday - in the past two days I have eaten five enormous meals and innumerable cheesecakes and have done no tikkunim, no corrections. Just moving from one holiday meal to another.

I have one wonderful friend who tells me she doesn't go to sleep without reading my blog. So even when I'm totally exhausted and have nothing to say I remember her and try to say something.

This time I don't really know what all the details are, but if there is a new virus that's screwing up the reactors in Iran and the computer warfare in Lebanon that's pretty amazing. The only problem is that I live in fear that someone is going to screw up the computers here - and everyone's life depends on computers right now.

The municipality of Tel Aviv has put 20 pianos all over the city. Do you know what this means? 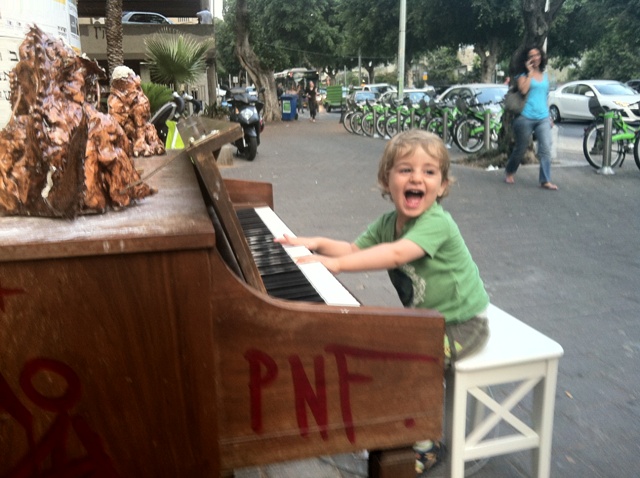 Maybe not too many people noticed that the Cameriĺs production of ôSchool for womenö was a thinly veiled warning against the occupation. Maybe they were too occupied with the slapstick of the cuckolded old man who spent his adult life waiting for a five year old girl he kept in isolation to grow up as an innocent woman only to discover that she is won by a more appropriate youth. You canĺt impose a will on another- the standard message of the play ľ in the context of our situation - doesnĺt mean women will always find a way to cheat you, but ôget out of the territories.ö But everything means something else here.

Ezi passed the PET scan!! It's not official but he's in remission.

"How Many Ways" came out yesterday.

It was the first museum opening we've been to in a long while. But we know that when Tami Katz-Friman has an exhibit it's an exhibit. And this one - about contemporary Indian art, was a big one. Fascinating. Especially the elevator that doesn't move, but the video goes up and down. We have to go back when there can be less time for hugging and kissing and more time to look at the art.