As soon as i get these pressing computer problems out of the way i'll be back - this afternoon probably. But first, to have a proper Friday afternoon in Tel Aviv.

A proper afternoon in Tel Aviv involves coffee, conversation, and sun.I like it with beer but it isn't absolutely necessary. We veered off course though and wound up in Indira, the Indian restaurant next to Tzavta. It was nothing to write home about, But Tel Aviv makes everything taste good.

Rockets keep falling on Sderot, in Lebanon more than 70 people have been killed, Iran is training terrorists against and training its atomic program against us, and in Gaza all hell is breaking loose.

And we traipse around the hills around Jerusalem looking at trees and weeds. 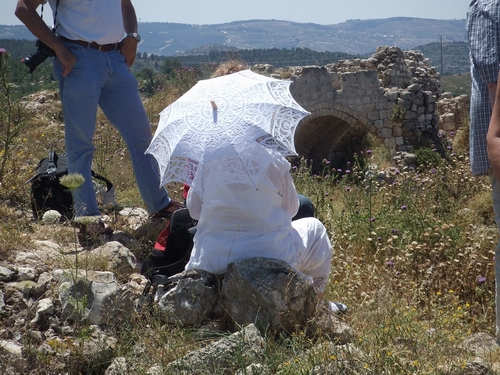 And believe me, it was the right thing to do.

Guided by Nissim Crispin, we encountered the katab tree,

met the "compass lettuce plant" (got to find the English for it),

drank from the spring,

and sat under the terebinths where I contemplated how the hair of Absalom got wound up in the branches.

Then I saw the horses and riders and it made sense. 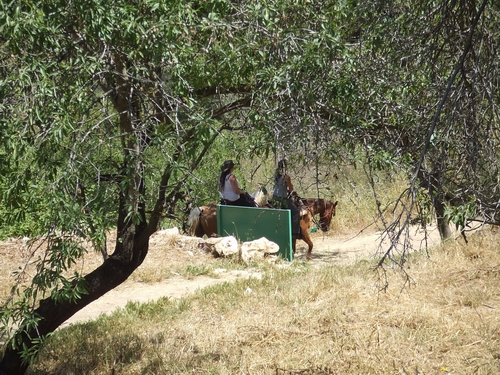 We also climbed so much my knees ache. I'll insert some pictures as soon as I can get up to fetch them.

After, we went to Nissim Crispin's home in the moshav of Tirosh for a Morrocan lunch. The couscous was made with Ras el Hanout, that gave it a pretty amazing touch, but I have no idea if this mixture of Moroccan spices included the stranger traditional ingredients of Spanish Fly and Belladonna beetles. Among the other dishes, we were also served tagine chicken made with ginger, cinnamon, cumin and oranges, and became quite drunk with the tastes and the sight.

Tomorrow are Labor party primaries. And guess who remain members despite everything...

Another person killed in Sderot today - a man from our area in the country - a man with a pregnant wife and a child.

We started our day at the polls. Not with great enthusiasm, not with the spirit in which we used to vote long ago, but with at least a sense of responsibility. I voted for Ami Ayalon, although I am more alligned with Ofer Paz Pines.

Now we are on our way to Nahallal for a bat mitzvah, a suitable jewish ending to a long jewish day.

Tell me how is it that the labor 'peace' candidate absolutely lost the elections in the Arab neighborhoods. Not that I disagree with their choice of Amir Peretz on social grounds, but it is strange.

It is a tough day so I will just answer questions.

The Bat Mitzvah party was worth the long ride to Nahallal (and the long ride back). I hope to post pictures eventually. I rarely write about individuals without express approval but i can write about the experience because the bat mitzvah girl was so welcoming and gracious that the overall effect was one of a group simcha,and that all were welcome. The restaurant, in what to me looked like the middle of nowhere, or as they say in yiddish, 'in drerd afn dach', on the roof of hell, turned out to be a proper gourmet establishment (called the Octogon) As a Tel Aviv snob, I can say that with authority.