we were talking about postmodernism today and what it was and how - say - as Umberto Eco said - if you wanted to tell someone you loved them, you would say 'as they say in novels, "I love you."' And I was full of the film about Edward R. Morrow that I had re-watched before our discussion, and how he went after the crazy communist-hunter Joseph McCarthy, and I was thinking that today we do not have to even say 'i love you,' but just recollect the context. Like the way we communicate in punchlines or lines from movies or tv. like 'I'll have what she's having." But now we're talking politics and we don't have to mention the specific villains or the specific situations to know what we mean. .

Today I fell in love - a tall, profound and beautiful Ethiopian woman - and I immediately knew she would be the best person to care for me after my operation. There have been fewer and fewer women I have trusted to nurse me after my last experience, but she is a fine woman and was a nurse back home. In a few days I will know exactly when I go under the knife, but now at least one weight has been lifted from my heart.

Also all my tests are okay for the op.

Tomorrow we go to the Dead Sea, even though Ezi has a totally red face from the chemo he has been treated with on his face. We're coming back early too because Ezi has been asked to lead a tour on Saturday about his grandfathers buildings in the port of Jaffa. 4:00 - it's in all the papers, but the guy who was going to lead the tour had to back out, so a wonderful student whose last name I hve momentarily forgotten, Ahmed something, stepped in. We've heard him lecture before. But he needs Ezi for background material. This should be fun.

We at the Dead Sea for my pre pre-op pain management. Wednesday is the pre-op and I’ve been quite mad running around getting the necessary tests and approvals. So a couple nights with the family should make things just a bit easier to take. But first was an annual meeting of the Daniel Rowing Center. I’m on the audit committee which makes it impossible to miss. The Daniel Rowing Center does so much good to so many people – having created a paraolympic team that sends winning contestants to the international parolympic competitions, helping all kinds of groups in rowing including minorities, mentally challenged, and physically challenged in numerous ways - even including a rowing team of sufferers from Parkinsons.

Why haven't I responded to Lag B'Omer? 1) The older I get the more frustrated I am at the lack of education about the management of fires. 2) I would rather concentrate on Rabbi Akiva and his phrase "Love thy neighbor as thyself"

Hello from the Dead Sea. Regards from Massada, where we took the easy way up. I try very hard not to be impressed but it is very impressive. What they've done with the place since we were there last! So much excavated, so much more of history understood. And so many tourists - Chinese and local and American and so forth. I haven't seen so many tourists since Hong Kong.

A few days ago Ezi got a call from the organization for the preservation of historical buildings asking him to give a lecture instead of the well-known preservationist Shmuel Giller, who wouldn't be able to attend. As part of the Open House celebration in Tel Aviv, there was a session on Ezi's grandfather and his work on the Jaffa Port. So he got together a bunch of A3 photographs and gave a half hour lecture on the history of his grandfather's buildings. It wasn't long enough. he could have gone on for hours. but half an hour standing up was enough. i couldn't even stay for the tour of the buildings by Tamar Tuchler. Anyway I am not crazy about lectures. And for goodness sake I'm have a hip replacement in a week's time. I was feeling like Chekhov's carriage driver who kept telling people his son just died and no one heard what he was saying. So I was incredibly grateful my nephew took me to his nearby flat for tea.

Two more kvetches. Ezi's been doing this chemo therapy on his face which turns his skin incredibly red. He was looking terrible. And feeling not so great. and then we tried my french sun-block (Guinot). Suddenly he looked almost normal. And I think it helped him to feel almost normal too. Second kvetch - this morning at 8 we meet with Orit and family for mud baths at the dead sea. Once the mud dried, we washed off, had a leisurely breakfast and began to make our way to Jaffa for the lecture. We got there an hour early and thought we could get lunch at the port. But there was no room in any of the restaurants, not even for an extra fishbone. Everybody was eating - we barely got ice cream. Even the cats seemed so full they turned away from the diners.This one seemed incredibly fat to me 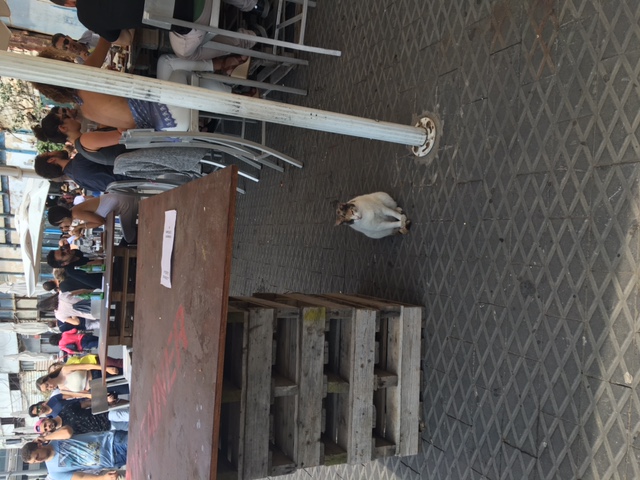