Our Obsession with Nepal in Retrospect: An Opinion

When I read Sayyed Kashua as always in Haaretz yesterday morning, it gave me thought. From far away chicago his little peak into the Hebrew papers to see the impact of the Arab demonstrations in Rabin Square reveals our narrow narcissism. Not only he says was the Arab land demonstration ignored in the papers, but the only interest in the disaster in Nepal was the rescue of Israelis.

Why is he wrong? This gentle man with whom I identify so deeply still doesn't know that no demonstration, even in the middle of Tel Aviv, is important any more. That the stupid explosions of houses in Arab villages, due to the illegal building of houses, due to the impossibility of getting a permit, is familiar to us, and we too are helpless. How do I in Tel Aviv know anything about our power to build? Haven't I told you about the little sun pergola Ezi built over the parking lot of 4 cars? the trials? the fees? the destruction of the sun shades? the fines? It has been over a year since the destruction of these little shades and Ezi hasn't ceased to try to build them back in ways that will be acceptable to the municipality. Right now it is the municipal engineer who is making up draconian rules for us.

As for Nepal, we did rescue almost all of our Israelis but we also rescued many more. And the rescued, like my friends' kids, stayed behind to help out the others. Many stayed behind even though they were beaten by the Nepalese and prevented from being rescued.

Does this alleviate our guilt? nothing can alleviate guilt, but there is a limit to how much guilt can be put on one person.

A few days ago an Ethiopian soldier was beaten on the street by policemen when he asked them what was going on. This has raised numerous protests about the general situation of the Ethiopian population in Israel. This, and a facebook question my neice asked about how to answer her daughter who pointed out a fat person on the street, raised a very powerful memory in my mind.

I was new to America
When for the first time
I saw a dark woman.

And I stared, admiring,
Wondering why
The beautiful brown
Ended
At the palms of her hands.

I wanted to climb into her lap
And be stroked by those hands,
But needed first to ask
If it was scrubbing
That ruined the color.

Of course I was scolded
And told I must keep
My silly opinions to myself.

But even now
A deep brown hand
Scours my heart.

I posted this to empathize with the demonstrations of the Ethiopian community against police violence and social discrimination. Within a few hours the demonstration had become violent with dozens of wounded. I don't know how it will develop but it looks terrible. The demonstrators and the police blame each other and no one will leave this battle ground satisfied.

I stayed up half the night watching it live, hoping i don't see a familiar face. Then I realized. I know so few Ethiopians the possibility is small. then i realized, the Ethiopians I know are in the arts - dancers, singers. I don't think I ever had an Ethiopian student. Remind me guys.

Anyway it looked to me like the demonstration was peaceful until some outsiders came in with pepper and molotov cocktails. But my understanding of the dynamics was limited to the few hours when I had to take a break to examine Ezi's grandfathers letters in captivity in Tashkent during WWI - it was an evening we had arranged long in advance with the family.

Before that we had a rather unusual event to attend: Ezi's parents had a friend who was a sculptor who did a rather amazing wall for Tel Hashomer hospital. Nehemia Azzaz. 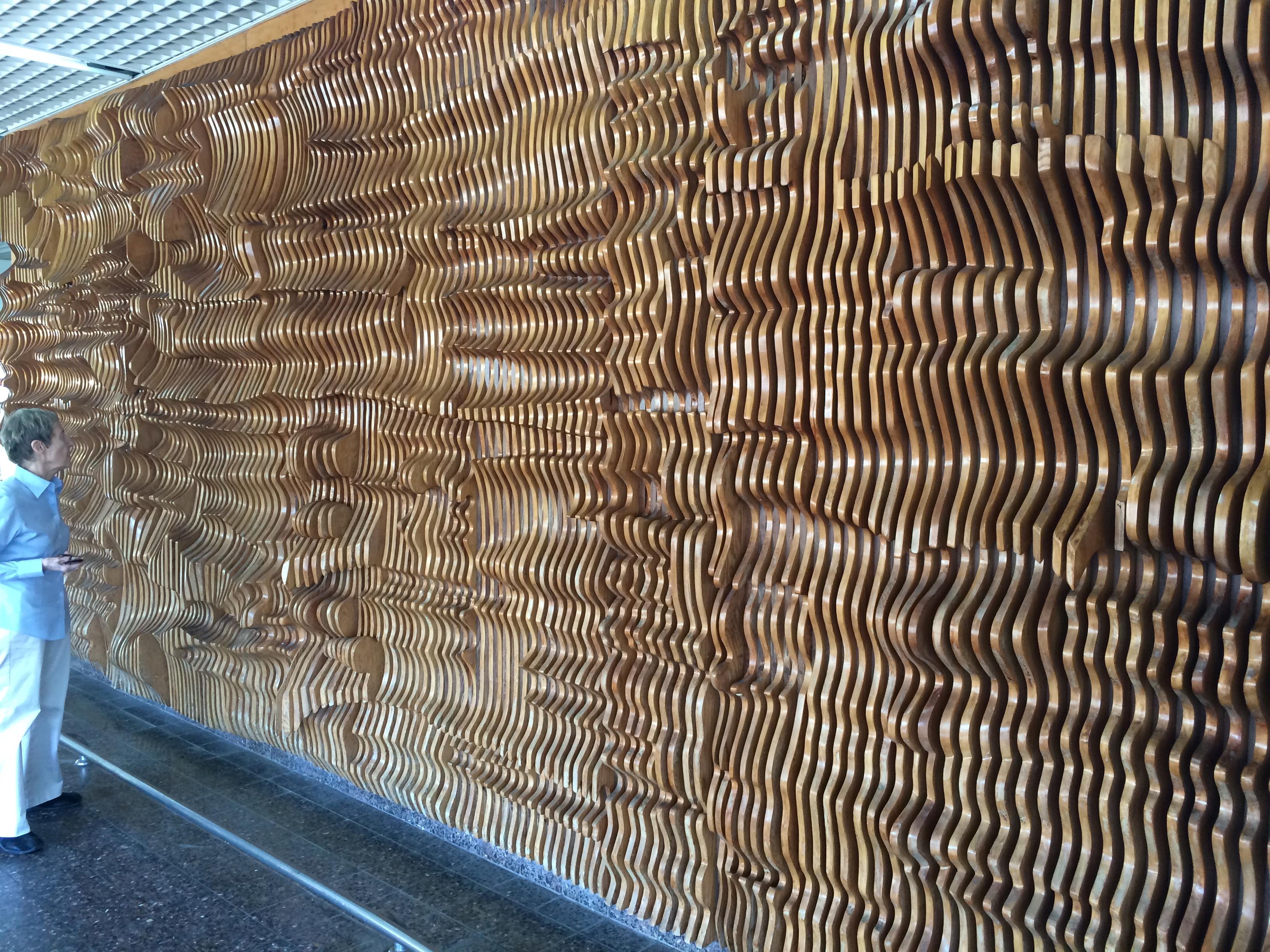 He actually did a great deal in ceramics and sculpture, all over Israel and abroad. There was one sculpture of a family he did for the children's library in Tel Aviv, but it kind of fell into disrepair and Tel Hashomer had a new rehabilitation center that suited it perfectly. so Yaffa Azzaz arranged (together with my friend Rachel Talmi) to place it in a perfect space so that it would not only be seen but also warm the hearts of the patients. 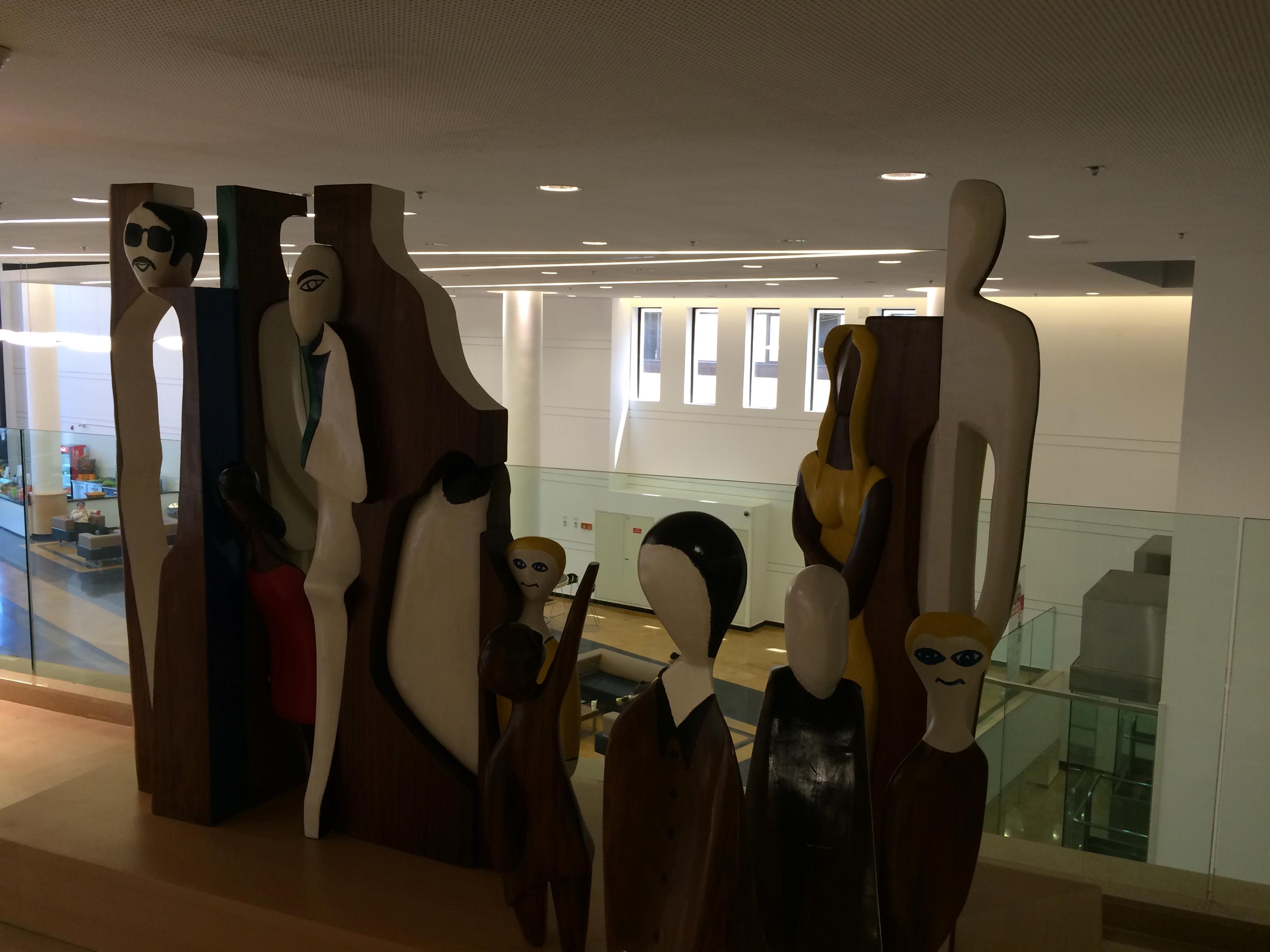 We reached the Dead Sea yesterday at noon and as soon as we had lunch and rested waded into the deeply concentrated salt water. it is more concentrated because we were in a salt pool, the kind the company uses to extract minerals. it is something like bathing in warm jelly.

The point of taking these baths is to ireduce my pain, and there is no doubt it is pleasurable. I took a mud bath that did me a world of good, and hope today to have an Ayurveda oil massage which will open my third eye.