We thought we wouldn't find a place in a restaurant today because of Shvuot. Saturdays are impossible so the holidays should be as well. But it was empty. Papa's had mostly tourists - I guess most families ate at home. But I really am overdosed as far as lactose is concerned. All we ate last night was cheese, yogurt,cheesecake, etc. to show our purity. And we got a sermon on Ruth as well. So I had to escape today to what i thought was the world of meat - but they had a special menu for the holiday - cannelloni, cheese gnocchi, etc. It was amazing.

How is it that the Syrian writers who live around the world haven't said anything about the bloodshed? I'm not getting it. Adonis.

We watched a wedding from the balcony of a friend's house in Jaffa. How could we not watch it? A plane flew over us - and we think it was the groom parachuted down into the crowd. A Friday sunset wedding with an airplane doing stunts before the guests. 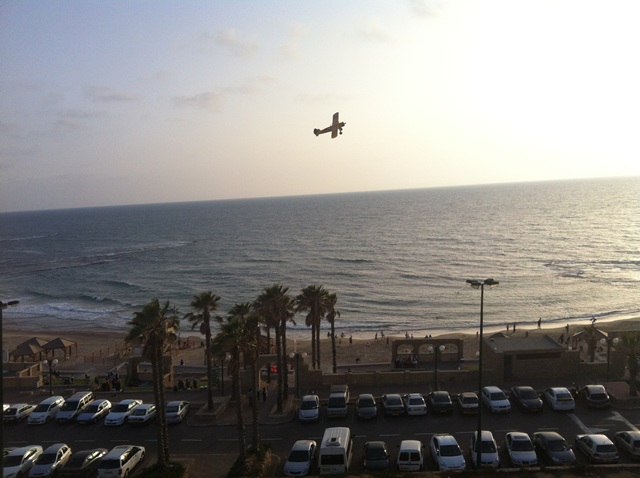 with chemical weapons being dumped on the people of Syria.

A visiting photographer from Paris asked me if Hebrew music is as angry as it is in the U..S. I told him that second generation people don't dare get that angry as in the US. My friend contradicted me - said that Arab rap is very angry.

Yesterday afternoon I was part of a discussion about rock music and texts led by Sharon Moldavi. Music and poems and talking about both - pretty amazing to me although i didnt get to talk about half of what I was interested in. Kobi Maidan, who translated Leonard Cohen to Hebrew, and Nissim Calderon - who probably knows more about music and poetry than anyone else in Hebrew, spoke wisely and gracefully, but Udi Sharabani, the poet who hid in the shadows until the end, was the only one who showed any anger - and that was with softness and humor.

And now it's time to go to Nessa's wedding. Years of travel hasn't made preparations easier. we're older and more weary every time, dreading the cross-continent journey no matter how much personal entertainment screens we have on the plane. Oh well, it will give me a perspective on our politics....Stay tuned - i'm expecting many brilliant observations that will do the world absolutely no good.