There were two special broadcasts on tv today - the visit of the Pope in Nazareth, and the opening of the trial of our former president Moshe Katzav for rape. These rang together in sharp contrast for me. What the Pope is doing is giving the Christian minority some strength and comfort. What Katzav is doing in trying to prove his innocence is the opposite - taking pride from the people in trying to restore his own. I know it's not fair - it's like comparing apples and rotten tomatoes - but still it pains to see so blatantly what we are missing in a leader. (If i didn't love Israel so much it wouldn't hurt).

We spent part of this evening at Pappa's - I know it is not the best evening to go there because it's so crowded, but we lucked out and there was a lot of room so we could concentrate on the music, the fish, and our conversation. I went through the evening thinking I must have forgotten something else we should have been doing, but that was because it was just so simply pleasurable. Last night, for example, I had to read poetry at Helicon (which was fun) and Ezi represented the family at our friend's dinner. And we don't have another night free for the next week. That's this season in Tel Aviv, day and night. There are more poetry festivals in Israel for the next month than I've been to in a year. Maghrar, Metulla, and the Poetry Place in Jerusalem, to name three. Don't ask how I'm going to make it through.

Celeb visitors in Israel. As the Pope waves goodbye, leaving an audience with very mixed reactions, I can only think of what it means to this neighborhood to have a guest of significance and influence in Israel. When Peter Yarrow (of Peter, Paul and Mary) was here last month with Charlotte Frank, they introduced their project, Operation Respect that is meant to encourage respect for others in all areas of life. Their efforts were in all directions - Yarrow sang with a choir of Arab and Jewish students from Yaffo and visited cities of mixed populations. He also led us in singing, and the idea of promoting understanding through music warmed all of our hearts. This is why there is no doubt in my mind that the coming visit of Leonard Cohen will have an enormous effect. There is something very encouraging to peace to have visitors who understand the difficulty of solving the problems here, on all sides.

I'll be spending the day in churches around the Sea of Galilee tomorrow....Tell you about this later...

I've just come home from a day with some friends investigating ancient sites and churches around the Sea of Galilee, and I just have to write it down. It reminds me of the old joke, "do you know why Israeli men pre-ejaculate?" "So they can run home and tell their friends." And so I am pretty exhausted but I'm pleased to tell you that there is always a great deal to learn about this country, and we learned some pretty interesting things today.

We started at the moshav of Arnun looking down at the Sea of Galilee and listening to a lecture about the life of Jesus punctuated and illustrated by music by Bach, Schubert, Mozart etc. To find in the music I have always known references to the places around the Galilee I have always known was an amazing experience in itself. But to go out afterward to Capernaum, to the Mount of Beatitudes, to Tabha (where the miracle of loaves and fishes took place) was integrating, enlightening, and significant. Pictures tomorrow. 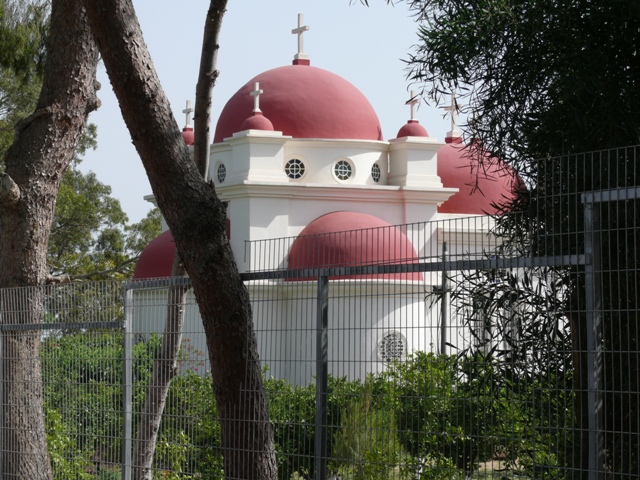 The Orthodox church near Capernaum 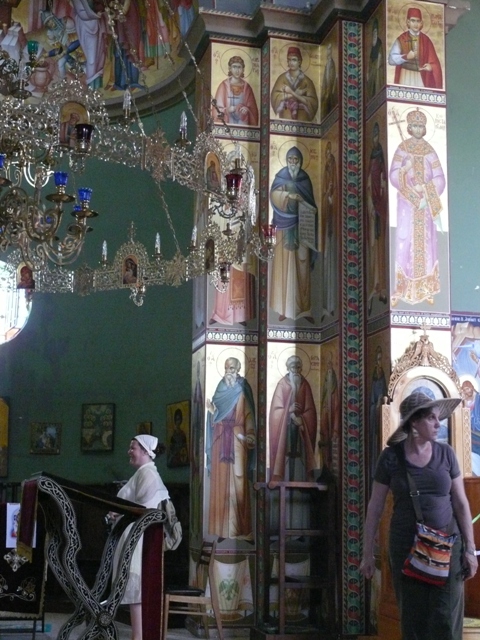 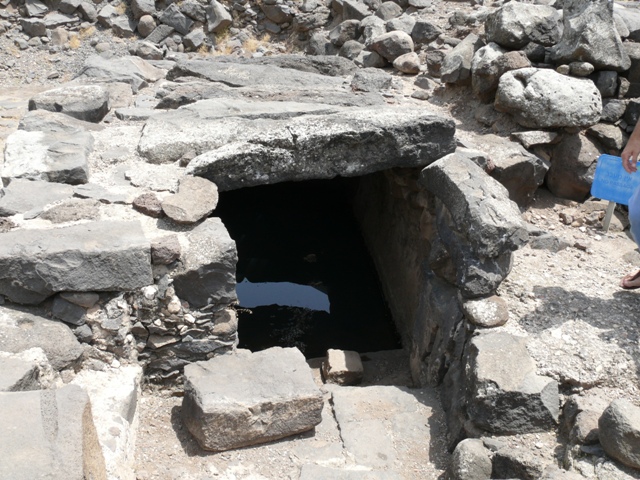 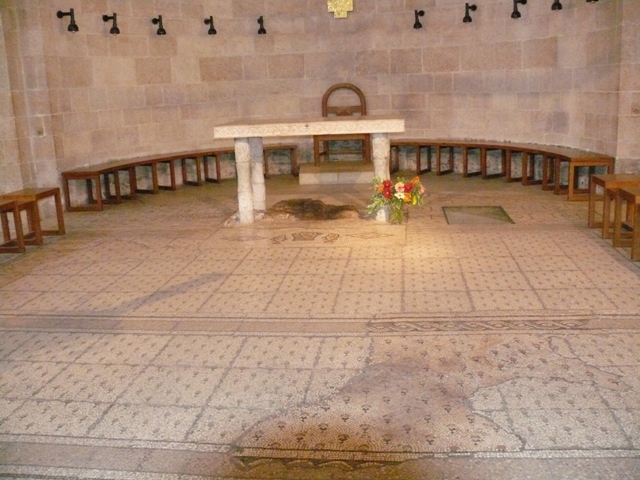 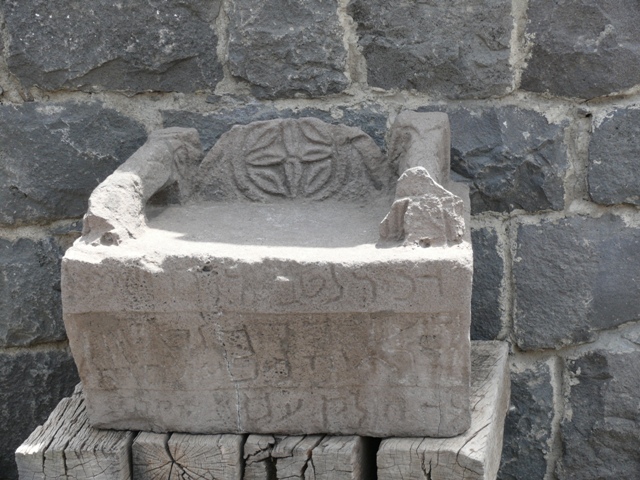 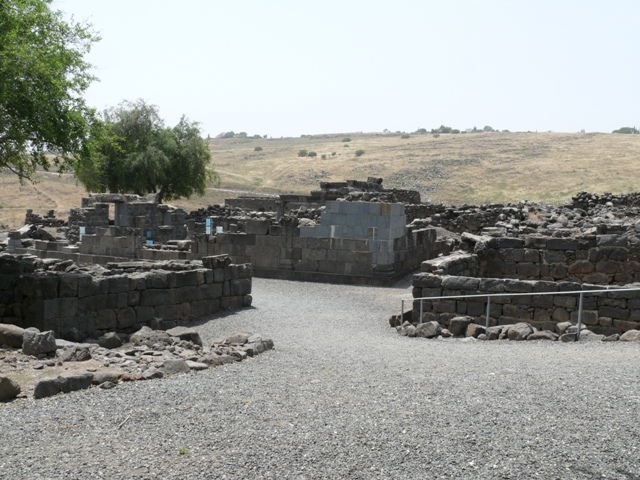 The floor in the church in Tabha 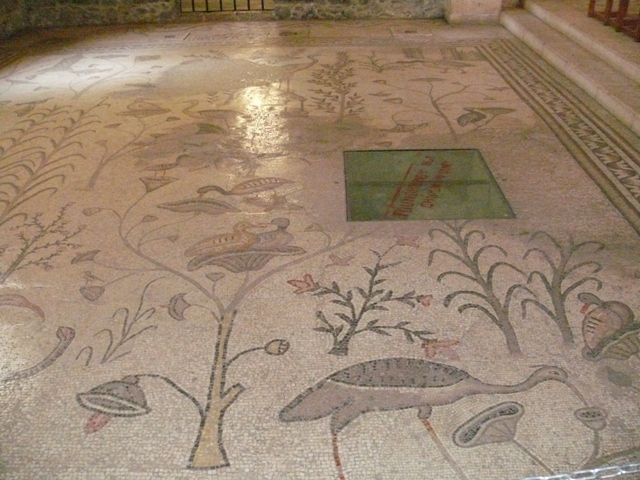 at the end of the day we came back to more simple vallies. and values. 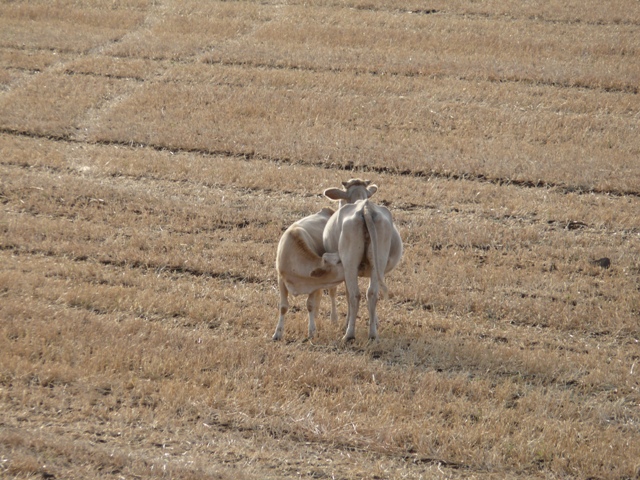 I wasn't on the board of the Yiddish Writers' Association last year or the year before because of Ezi's illness, but today marked my comeback. There was an annual executive meeting this morning and i discovered that not much had changed. The financial crisis is far more serious because donations have greatly diminished, and the house itself is in danger. The old Yiddish writers who began their professional careers with government support of their journals and publications are now being left without any professional encouragement. It would seem to me that there are people out there in webland who might be interested in adopting a yiddish writer, or even a writers' organization, so that the race doesn't disappear. Click here for the English Site. There's no doubt that there's a renewed interest in Yiddish all over the world, but i think this is probably the only working writers union in Yiddish.

I should have gone to Maghrar this afternoon for the opening ceremony of the poetry festival there, but Ezi's sick, and has probably given me his cold so i decided to put my visit off until Tuesday. I really wish i was there. It is one of the craziest festivals I know - and i write about it every year (except last year when i think Ezi was in the hospital). So i'd better get there, even though we have a wedding to go to that night.

Please test me on this = i am pretty sure there is a difference in the accent of the birds up north and the birds of Tel Aviv. I mean they all chirp, and they have tunes, but the ones here sound more nervous, speeded up.... Could it be that city life affects them?

I seem to have a problem putting up the pictures i promised the other day. Never mind - it can wait. We're too involved with what Bibi said to Obama and whether Sara is going to be ignored.

Not me - i think Obama is stronger.

A few days ago a defense of Tel Aviv came out in the Jerusalem Post. As usual whenever I'm quoted, I always think of better things to say afterward, but David Brinn pretty well covered it.

Except that this is a city impossible to cover in one article. Today I was with a guest who mentioned that Tel Aviv reminded her of Miami. Sometimes we say that it is like a caricature of New York. Last week, when we were studying Janus Korczak we learned that he wrote that on his next visit to Israel he wanted to go to the kibbutzim and not the city because Tel Aviv was like a suburb of Warsaw. So there are many facets and limitations to this place, and I love many of them.