Have you signed the petition yet? Oppose the Blacklist of Academics from Haifa University and Bar Ilan. Sign here.

And take a look at the variety of people who have signed - that's because the boycott is bad for everyone.

So when we were out last night at Maslavita, we recorded "Eretz Nehederet" - and it turned out we used the tape that had many of the short programs I did on tv. I lost the news a few weeks ago on Saul Bellow, the interview Benny Levin did with me last week, and more I don't remember, never saw, and would really like. Anyone have any thing of this?

It was almost worth losing the tapes to spend an evening there. A new place with lots of trance and atmosphere. I'm reading there with Rafi Weichert, Rony Sommeck and Chicky Arad at the end of the month.

If you haven't heard of Maslavita, its because it's new - that whole area of Schunat Montefiore is really coming alive - Soncino, Yehudith, HeAchim Maslavita. Maslavita is on 7 HaAchim Maslavita Street - on the second floor - an enormous warehouse with low couches and tables, carpets, soft lights. We had some kind of dessert - fruit wrapped in fried dough that was surprising and wonderful. I couldn't catch the name even though it was repeated to me, politely, over and over.

Tomorrow we're supposed to be driving up to Tefen for the opening of Aharon Messeg's exhibit. I've been looking forward to it for a long time, even with the traffic and the mess. But who knows when we'll be able to get back?

Tefen is pretty breathtaking. Ezi took these and thousands of pictures of the Sculptures. This one is of me and Moti.

This one is of Ezi and his friends (made by Orly Cymbalista). 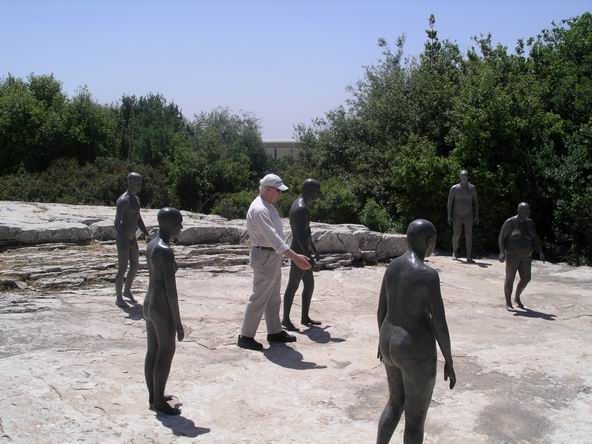 After a particularly trying ultra-sound - one of those that cause only emotional pain, however, I decided i needed a present. So i stopped off at Shiruzzi - my ultimate retail therapy - ashtrei haparchei street off of Basel Street. An amazing neighborhood for kinky surprises. I bought a pair of silver lame mary-janes just now, that make me look something like a jazzed up Judy Garland, and then got invited to do a song on channel 10 tomorrow morning. So they are like wishing shoes, although i didn't actually have time to make a wish.

Yesterday, Gideon Ofrat's lecture about the painting of Aharon Messeg concerned itself with home and displacement. Here's an example. There are lots more on the web. Messeg, whose paintings are abstract, almost totally devoid of representational objects, still reveals, upon closer examination, an obsession with home. It is a national obsession - so many of us were displaced, here or there, now or then, and spend a great deal of our time trying to reconstruct the sense of security a home provides.

No wonder we're having such a problem with the idea of disengagement. Still - it has to be done, and has to continue.

Got a letter today from an old friend I haven't seen in a while. He was surprised that I was so vehement about opposing the boycott of Haifa and Bar Ilan Academics. To save him time looking up what I've been writing all along, I will summarize: 1) I grew up during the McCarthy Era. Didn't like it. 2) I believe in academic freedom. 3) I believe in scholarly thoroughness. Find out all the facts, draw ones own conclusions from those facts - the statement of the AUT seems to indicate that no one has made any effort to find out the facts. Period. 4) although I am against the occupation, I am for an independent Jewish State. If it really doesn't work, we'll go back to the Mandate, okay? 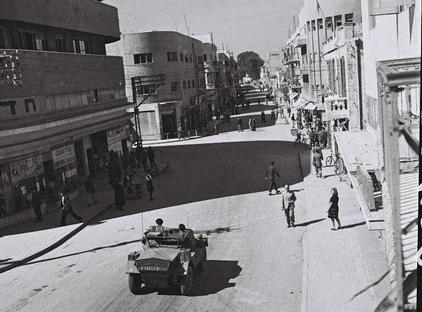 Here are British Soldiers on Herzl Street...My sister-in-law says that when they had curfews, she couldn't even raise her head to peek out the balcony - they would shoot on sight.

As for the facts, here are some:

Last week the University of Haifa came out with this statement: The University of Haifa Response to the AUT Decision (1.5.05)
The University of Haifa is saddened and not a little outraged by the utterly unjust and unjustifiable decision of the AUT and by its attempt to erect barriers and obstruct the flow of ideas within the international academic community.
In lieu of evidence to support the singling out of Israeli academia, the authors of this campaign have chosen to adopt a three-year old urban legend. We are astounded by the fact that the AUT never requested our response prior to adopting their resolution, and did not allow our position to be presented by members of the AUT who are familiar with the facts.
The case against Israeli academia, in general, and the University of Haifa in particular, is devoid of empirical evidence and violates the principle of due process. Driven by a prior and prejudicial assumption of guilt, the AUT has refused to confuse itself with facts.
In actual fact, during the past few years, Dr. Pappe has transgressed all common ethical standards of academic life. Yet, despite his conduct, the University of Haifa has demonstrated extraordinary tolerance. One of his colleagues did indeed lodge a complaint with the internal faculty disciplinary committee.
The complaint focused on Dr. Pappe's unethical behavior towards his peers and his efforts to disbar them from international forums for daring to contradict his views. However, Dr. Pappe was never summoned by the disciplinary committee as the committee's chairperson decided not to pursue the complaint. Moreover, and contrary to Dr. Pappe's claim, the university made no attempt to expel him.
As to the now too famous thesis that provoked this altercation, an independent committee was asked to examine the validity of the quotes that were used as the "scientific basis" for the highly controversial charges proffered in this thesis, authored by Mr. Teddy Katz.
After a thorough examination, the committee members concluded that, in fact, the quotes in the written text did not match the taped comments of the interviews and that the text was grossly distorted. Therefore, they disqualified this MA thesis.
These findings, it is important to note, matched a court decision issued on the same matter. As Dr. Pappe did not approve of the committee's decision, despite the undeniable discrepancies between the text and the taped interviews, he reacted by calling on the academic community to boycott the members of this committee and the University of Haifa. Despite these violations of academic collegiality and ethics Dr. Pappe never faced disciplinary proceedings nor was his tenured status in any way endangered.
Although there is always more work to do, the University of Haifa is proud of its record of Arab-Jewish cooperation and reconciliation, both on campus and in the community. Twenty percent of our student body are Arab citizens of the State of Israel, and the many Arab faculty members at Haifa include departmental chairs and a Dean. We will continue our efforts to further Jewish-Arab reconciliation, despite politically motivated initiatives to muzzle free speech and the academic discourse.
We are puzzled by the fact that despite the deluge of abuses of academic freedom throughout the world, the AUT has chosen to focus upon a politically spurious charge and, on the basis of false allegations, single out the University of Haifa for condemnation. The University of Haifa calls upon the AUT to rescind its resolution; transparently discriminatory and based on a complete distortion of the facts, it is far more embarrassing to the AUT than to the University. We also call upon the academic community in the United Kingdom to reject this politically motivated abuse of the fundamental principles of academic discourse.

A special show tonight on David Avidan reminded me it has been 10 years since his death. The poet who transformed poetry in the '60s here - and continued to influence every generation until his very late years - also influenced me more than I'd like to admit. Not only did he edit my very first book, but the long hours we spent together must have changed me, despite my aversion to his ego.

Lisa and I were comparing amazing conversations in standard situations in Israel. I'm sure she's going to write about her experiences, so I will stick to mine, even though I'd like to steal hers. When I was new to this country, and spent a lot of time in the American Cultural Center Library, I once came in with an armful of reading and said to the librarian, "I'd like to return these books." He looked at the books, at me, and then his face took on an expression of total shock. "Why?"

Soon after I went to the doctor, and spent a long time enumerating my many symptoms. "My, my!" He said, shaking his head, "Have you ever had this before?" "Yes," I replied. "Well, you've got it again!"

This kind of exchange between strangers is very common around here, and has to be enjoyed in the right spirit. ...