Warm wishes for a speedy and complete recovery to President Shimon Peres!

I would have liked to have been in the square tonight. In Rabin Square I mean. But I've got to be worried about germs. We took a chance going out to lunch today because Ezi isn't well, but we had such a great time it couldn't have been bad for us. The restaurant is called Pat qua and according to my companions, it has gone down hill. As far as I remember it was always kind of average. but there must have been something good about it because we felt an incredible intimacy and warmth.

Not a word was spoken about politics, now that I think about it. Even though all we think about it the political situation and its ramifications, for ourselves and for the world. 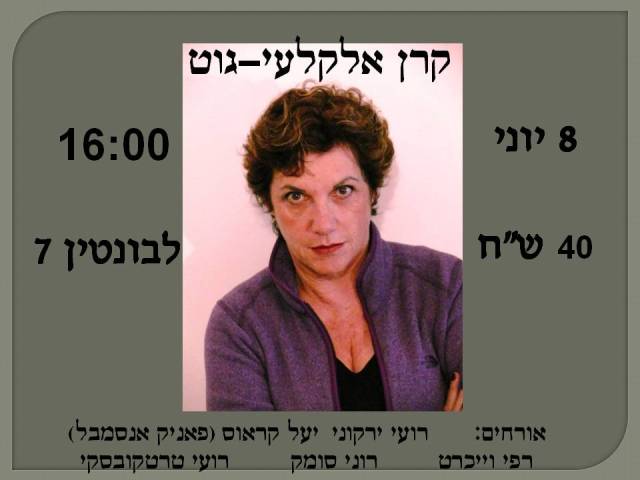 An article today in the Forward by Goldie Morgenthaler reminded me of the wonderful experience I had reading Chava Rosenfarb's Survivors. It first appeared in Interdisciplinary Literary Studies: A Journal of Criticism and Theory, Vol. 9, Number 2, Spring, 2008, 123-5. I couldn't get over the beauty of the book of seven short stories about Holocaust survivors.

In the morning I went to the health clinic again, again with someone else, but this time I realized that I had caught whatever Ezi had and barely made it home.

Let us see- where did our day go? Nothing seemed to go easily - galleys, posters, stuff like that - every thing had to be done immediately and at the same time as the others. my only joy was a conversation on the radio with Eran Sabag, who always brings me back to the earlier days of radio when you could say anything you wanted because no one was listening.

It was a lovely night and i went back to my dinner with increased appetite.

i've been trying to think of something nice to say for the past half an hour. it's all details - proofs of the disk again, exams, papers, stuff like that. i'm giving an open lecture tomorrow in Roi's poetry analysis course called 'poetry all over the place (Webb 1) and as I put together the material I realized Ive been writing poetry all over everything for years.