After an extremely civilized evening of government prizes for music and dance (Office of Culture and Sport), we fell into bed last night, feeling very cultured. Mira Zakai won a lifetime award for her contribution to music, as well as Yonatan Zak, and a variety of choreographers. Ruth Eshel, who also won a lifetime achievement award for her contribution to dance, pointed out that all that is lacking is research in the history of dance - and I cannot stress this need for historical documentation enough.

Here's an example. The buildings Ezi's grandfather built are only now being discovered. There is little documentation unless there was a court case or some other problem. And he built some of the most important buildings in Israel. And was head of the Engineers and Builders union. We don't seem to realize that we're making history and those things need to be documented. And understood.

Today's mission was some MRI Ezi had to do in Sheba hospital. We got there on time, GPSed our way to the parking lot (no mean feat) but for the life of us couldn't find the unit. No signs. People kept misdirecting us all over the place. Down the corridor, up the stairs, down the corridor, down the stairs. Why was it so complicated? Why were there no maps, no directions, no authoritative people to ask? One woman directed us, and if we had followed her directions we would have wound up back in the parking garage. Finally Ezi found a doctor who knew where it was. But by then I was wiped out. Ezi had time to rest in the MRI machine, but me i had to walk all the way to the cafe and banter with the carrot juice man for an hour....

Oh, and we came home to find that the sewage was back on our floor.

Tomorrow is Ichilov hospital for a quick chat with the doctor and then back home with the plumber.

And people ask me what I do all day.

While Bibi was reiterating the song and dance about the safety of the Jewish homeland I was sitting in the middle of the bubble. absolute middle. In the middle of the square in front of Habima theater is a kind of play pit, a few steps down the wooden stairs into the flower garden where people sit around, children play, and everyone listens to Vivaldi.

It's a bubble, and a precious one.

All that's missing are a few hundred nurseries and creches, a few hundred affordable apartments, plumbing and jobs and some simple traffic rules. I have a passion for traffic rules,with the idea that the more clear people are about what they can and they can't do, the comfortable they are. in the framework i mean that allows you not the think about alternatives

the yiddish writers group is going belly up - no money to run the building. i have been called as an expert to help them work things out. but they really need is money money money - maybe 15 thou a year; Surely there is someone who wants to keep the writing in Yiddish going. someone who will help keep the wolf from the door for a few years more.

"Dag Musar," or Sea Bass in English, is a complicated title for a play. Because althought the word, "dag" is easy to translate as "fish," "musar" is also "lesson, lesson in ethics." So the play we saw last night was initially about a fishy story, or secrets of a family that eventually stink to high heaven. It was a comedy and even though i tried i couldn't keep from laughing along with the others throughout the play. I didn't want to laugh because the subjects themselves aren't funny, but the way they were dealt with worked. An illegal worker's death in the house where illegal additions were built in the house of a lawyer doesn't sound appetizing to me - there are houses on my block where additions were built illegally and covered up, there are illegal workers too. And after it took me forever to make sure I have health insurance for my legal worker and it took me forever to arrange her pension and all that, I'm just not happy about making light of it. But that's the way it is.

I did laugh today in the rabbinate, where i went to bear witness to the single state of a potential groom. First off the place is so much nicer than it was when i first encountered it - in a divorce over 36 years ago. The front door - as always - is for divorces and the back door for marriages. The last time I was there to be a witness in a divorce case, and to swear i know the person, it was already more civilized than before - more advanced, more organized. This time the Rabbi asked important questions - like am I sure the groom is single. Am I sure he was divorced. Do I think he is a Cohen, has his father ever been seen in a cemetery? very sneaky. A Cohen can't marry a divorcee...

I haven't seen much international racket yet about involved in the naval incident in which at least 30 rockets were found in a panama ship with turkish sailors carrying iranian designed rockets made in syria destined for gaza, but the whole capture was a big deal for us. Not because it stops the weapons going to Gaza or Sinai - because who knows how many got through without our notice, but because it might make Iran think twice next time. 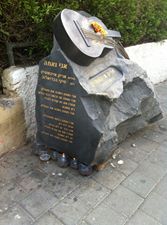 As I walked from Beit Levick to Papa's this morning, I came upon Arik Einstein's home. This memorial, almost blocking the sidewalk, is so heartfelt and personal, I couldn't help but stop and take this photo.