Still under the weather I have begun planning which charities I will support for the coming holiday. From abroad a more accessible one is Yad Lechaver But there are many more - and 400000 people need help for the holidays. We really have a long way to go to return a sense of government and general social responsibility to this country. But we are beginning to be aware of this.

One of the signs of a public action taking over where the government has backed off is a group of independent pharmacies dispensing at cost price medication deemed too expensive by the health clinic to fund. These pharmacies are listed below: דורון
‏גאולה 15, רעננה
09-7716084

The idea has been brewing in me a long time that the small independent pharmacies deserve the loyalty of Israel's citizens. And I think I'll be frequenting these places when ever possible.

Maybe the presence of Labor in the government will help us bring back public responsibility for its citizens. I hope so. First I hope that someone like Julie Tamir will be minister of education, that there will be some interest in funding education, in educating educators, and enabling learning to take place on all levels. To have a minister of education like we had for the last few years, one who is basically against the concept of education, has been a totally debilitating experience.

I don't get it. I am the first English poet to participate in the Israel Festival, and therefore a rare and new sign of the integration of Anglo-Saxon immigrants to the Hebrew culture. And not one English paper has noted it.

The Pensioners' Party does not cease to interest us -All those people who are suddenly in the government, with no experience after 70-80 years. How will they function? I'm twenty years younger and I couldn't do it. And they say that the 8th person on the list is a Philipine Nurse. After all you don't see too many old people walking around without their devoted nurses.

The last three Friday Night dinners have culminated in the gathering everyone present around the television to see "Wonderful Country," "Eretz Nehederet." Each time the people and the place were different, but the custom was the same. Where we used to try to watch the news together on Friday night, we now watch only the parody of the news. It is often postmodernistically slapstick (last night a competiton between two anchorwomen from opposing channels led to a mudwrestling contest) but also comes out with astute observations that the news could never print. 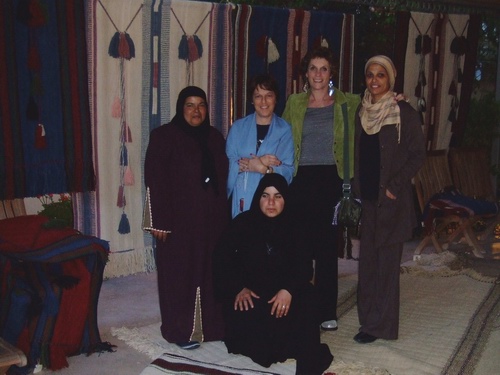 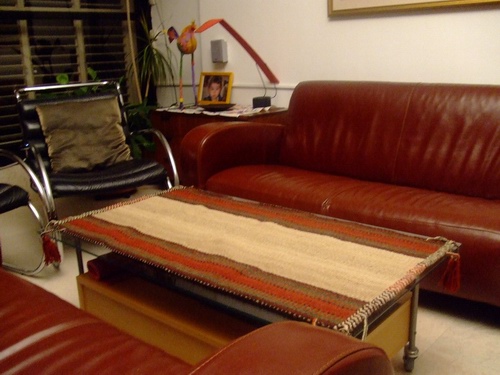 (we don't have carpets on our floors because our dog automatically pees on every carpet we bring home as soon as we put it down, but these carpets are too beautiful to pass up.)

There are 150 weavers at Lakiya. They are Beduin women who have formed an industry. We met them at Naomi and Daniel Furman's home, where their work was on display for the weekend.

After a night of antibiotic-induced mixups that culminated in bed with a terrier terrified of the uneending lightning, i had to make it to rehearsal at 9 in Beit Tami. Not quite awake, the neighborhood of Sheinkin seemed like a dream to me - the colorful people, the confusions of types, but most of all the winter weather....

And now to bed"

There are two issues that are really burning in Tel Aviv: apartments and cleaners. Impossible to find. I have a friend who has been looking for a place to live in Tel Aviv for months - say 2 rooms for 700 dollars a month. Nothing. He's getting desperate. Even though it is not a matter of life-and-death I too have been getting desperate - about a cleaner - Almost 2 years a woman has been working for me with a completely different concept about cleanliness and order than I have been accustomed to all my life. On the other hand, she has a much higher standard of living than me, so who am I to judge?

Who do I blame? For the apartment situation, it is too complicated to go into now. For the cleaners situation - Bibi of course. I think I've discussed this ad nauseum, but Israelis do not work well in what some people wrongly call 'unskilled' labor - they are too busy thinking about how they're going to get out of this. Why don't I do this myself? I don't seem to have the stamina for it.

Whoops - the murder of an elderly woman last month was just judged to have been committed by her cleaner...