A man writes me from abroad that he wants to move to Israel but has a number of questions. Since I have received similar questions before from other people but usually don't get a chance to answer, I'm going to try to do it on line, Here's the question:

. Ive heard so much negativity from the Israelis here about how difficult the life is over there,especially for someone in the arts. I would like to here more about your experience there. Also would like to know more about Tel Aviv. Does the city inspire you to write. Do you feel that the city stimulates you,and is there enough to do there at night. Thank you for your time...

It will take a few days to answer it correctly so I may spread this out:

1. It makes sense that the Israelis living abroad will say: "how difficult the life is over there." If it was easy they'd be here. And they are right. It is difficult. On almost every level. Let's begin with the household. A friend of mine maintains a house both here and in the U.S. She says that it is much more work here because of the dust, the bugs, the home traffic, and the intensity of life. Dust means more cleaning, washing floors, etc. Bugs make cleaning more of a necessity. (I remember years ago visiting a friend who hadn't washed dishes for two days, and the counter was crawling with every sort of varmints). The traffic: People come over more - invited and not invited. Even today, there seems less of a sense of personal privacy and the effect is like the tv sitcoms where no doors are locked and there are always neighbors walking in. Of course this depends on your lifestyle too. So does the intensity of life. You don't HAVE to get involved in all that's going on. But it drags you in. So if you're bored this is a great place to be.

Economically, it's also hard - hard to find a job, hard to make connections, hard to get attention, hard to get ahead, hard to publish, etc. etc. But it's also so stimulating that you can't help but be creative. So many conflicting feelings, so many different kinds of people, behavior, reactions...

And now I'm going to take a break and celebrate my birthday.

Had you been wandering around Tel Aviv yesterday evening, you might have seen an otherwise dignified 60 year old woman, in a grey jacket from Comme-il-faut bearing a poem of hers in the lining, wearing a flower wreath like a kindergartener. I chose for my birthday to visit the exhibit at the Helena Rubinstein Pavillion by Sigalit Landau, entitled "The Endless Solution". This is a beautiful, moving, disturbing and even sometimes lyrical installation, and exceedingly professional, but I was in a very positive mood so the old argument of "if everything is pointless then why talk so much about it" kept coming in to my head. I will have to see the exhibit when i am more sober and not wearing a wreathe.

Now my kids were much more serious and profound about it and maybe i can get them to express a more intelligent opinion. I may have a samizdat picture taken from Oren's celphone if i can figure out how to email it. 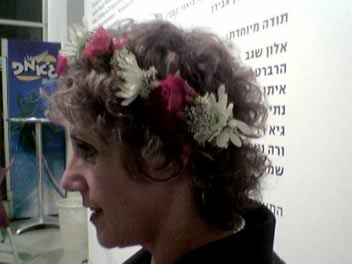 Today, Land Day, this year dedicated to those villages which have been erased, I paid particular attention to a very dark woman in traditional embroidered muslim dress at the check out counter. There was a bit of a flurry about her, and I came up to see why. It turned out that she refused to speak Hebrew. Although she understood every word, and responded to the check out woman correctly, she would not explain anything. She would not utter the language of the oppressor.

To get back to the questions I promised to answer 2 days ago: 2. Does the city inspire me? Just leave me on the street for twenty minutes with no errands to run and I have a poem, at the very least. The variety of people, the intensity of their responses, the density of experiences - make every walk on the street a fascination.

Or a nightmare. Since we still haven't finished remodeling we forced ourselves out to Ikea today to get two more cupboards. We got up early despite the clock change (one more hour of glorious sunlight a day! what joy! Daylight savings always makes me happier!) and were at the doors almost upon opening. We thought we'd beat the erev-shabbat crowd. But the place was jammed. It took us four hours to get through the store with our cupboards, and we were idling either. It used to be like that when Macy's had a white sale! But surprisingly enough despite all the different cultures crowded together and the consequent variegated concepts of manners, everyone seemed raather - well - nice. Later a friend expressed surprise that I had ventured out - during the pre-pesach rush - and only then I realized everyone was buying for the holidays.

That's the thing about this place - everyone does everything together at the same time. Friday night - everyone's having family dinner (not us - we have saturday lunches instead) Holidays - everyone ... Well, let me illustrate. A friend calls me the other day and asks me what I am doing for passover. I'm not sure - I know I'm having a seder and that some relatives will be attending. "We have to leave the country." she said. Why? "Because we can't stay home and not be invited anywhere." Her husband had suggested that they pull the shades down and pretend they went away, but she claimed that would be depressing - and anyhow - the neighbors would see their car. I couldn't tell if she was serious or just in a bad mood - but I've heard that kind of idea expressed before.

It isn't so surprising. On a holiday there is a completely different atmosphere on the streets. When I take the dog around the block I can tell what day of the year it is just from the sounds, the smells, the traffic. To be on the outside of that, not to be part of the 'group' could be problematic.

But that's what this religion is, anyway. The only religion named after a people and not a God or a leader, I think. Because the group is what counts.

Sometimes I think even God doesn't matter too much to this religion - I once told this story in a poem called Mount Sinai:

Maybe there is no God,
I once suggested to my Rebbe.
He shrugged, "So?"

"A Jew still has to study Torah."


"Leave the absolutes for Him,
even questions of His existence. You
have business of your own."


It's in a book called Ignorant Armies

After the most amazing days in Tel Aviv, today is cold, grey, and almost rainy. A perfect day to stay in bed - or to go to Suzanna. We opted for Neve Tzedek and Suzanna. Now the name Suzanna comes from the factthat this place is opposite Suzanne Dellal dance center and there is much about the clientele that recalls that fact. For example there were at least three women sitting cross-legged on the wooden chairs of the balcony where we ate. Lotus. And the waiters all look like male dancers. Very elegant-cool. On the other hand, the food is earthy, middle-eastern, and filling. Kubbe in red beet sauce, fruit stuffed with meat, lamb in yoghurt, a very delicate moussaka, and - Ezi's favorite - okra and kubbe.

The rest of the day had also that antithesis in it - that combination of European artsy atmosphere and the reality of home. I would have said more about it - I actually did - but erased it apparently. Maybe some one saved my day?