Taped a program on Robert Frost for the army channel radio today which will be aired on friday afternoon at 5. Then Rony Sommek called me to say that he read some of the refrigerator poems I showed him yesterday on the army channel today and they'll be aired at 4 on Friday. So Friday is going to be a cold day.

Forgot to post the link to some of Azriel Kaufman's poems in English: Here they are.

I know it. I'm a bore online lately. But off line I'm having a ball. Despite my knee - which I know will need to be 'done' - I'm doing okay. So lately I've been buying my passover gear in the market. Yesterday this woman in the houseware booth tried to sell me a white plastic tablecloth (by the meter) that says good shabbas and good holidays in silver. it is so shmaltzy and kitschy that i couldn't stop thinking about it and bought 4 meters for tomorrow night's family birthday party - cost me all of 10 bucks. "That's a fine woman," the saleswoman said as I left, "She takes care of all of her family."

Ultimately, as you can see, it doesn't take much to please me. I was listening to Obama's European speech about standing with our allies, and taking care of the small countries too, and I was nodding and grinning and then suddenly remembered it sounded familiar. Didn't Harry Truman give that speech in '48 in Formosa? But wasn't that AFTER he dropped the bombs? Think that might have given the speech a different context?

I didn't get to the meeting of the Yiddish Writers' Association today. My knee was really bothering me and ... well I couldn't take the dilemma. Old writers, younger management, no money - what is the future for the Yiddish writers? Even devotees like me are deserting the sinking ship.

Today was my birthday. It is amazing how the comfort of friends makes easing into a new number easier.

Even though some of my friends make sure I'm not too comfortable - especially with the politics of this country. Is this issue like the Yiddish Writers that I abandon because I don't know what to do? In any case, these friends helped to keep me in the real world. In proportion. 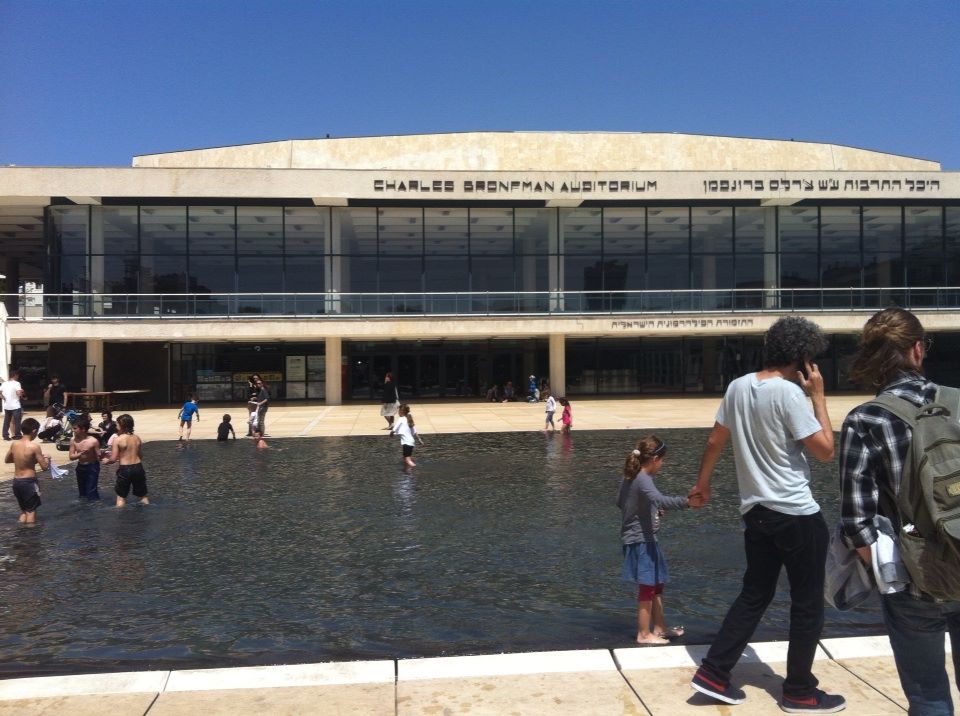 In the same way the pomposity of Habima square is ameliorated by the children in the pool here.

Some people wrote me on facebook, after i'd put this photo on line, that it shows that kids of today have nothing to do. My idea is that they have too much to do, that they have to exist simple lives within the great walls built by their elders, and that their breaking of the rules of no swimming in the reflecting pool is the first step...