oy, it's already the 25th and i'm still drying out from the sudden storm that hit us when we came out of the movie theater. the parking lot is next to the sea and the lightning was coming every few seconds and scaring me to death. inside the theater we were the only audience except for another couple and a woman in a cloth jacket, and the usher asked us as we left if we thought the film was worth it. it was, but it had been on so long that everyone had already seen it - The Green Book.

this storm is so unusual for this time of year - we're supposed to be in spring.

they asked for it. 5:25 this morning I woke up with a terrible feeling. but there was nothing and i went back to sleep. but it turned out there WAS something. a rocket from Gaza hit a house about 12 miles from us, wounded the grandmother, the mother and some of the babies, even though they ran for the shelter room in their house. killed the dog. at the moment they're incredibly grateful that the wounds were not life-threatening, but soon they will realize that their entire house was destroyed and with it their sense of security forever.

How does this affect narcissistic me? first - i've got such a bad cold i can't get out of bed without getting dizzy. so - second - i order ezi to find the key to the communal shelter 2 floors down and hang it up by the door. i'd rather he left the door unlocked, but he doesn't want to do that yet. third - i tell him i won't make it to the shelter if the counter attack starts tonight and he can leave me in the hallway on his way down there. he doesn't argue - i know he doesn't really believe we could be on the verge of a massive attack but i figure that there have been enough provocations in the past few weeks - from the prisons and borders as well as from the sky - and we're going to do something drastic ASAP - and they know it's coming and will massively hit back.

my assumption is that we will now hit homes as well as military institutions, and they wanted this to happen so they can escalate. or maybe the economic factor is at play here - the more we bomb citizens in Gaza, the more money Hamas gets.

For some reason I wanted to believe in the ceasefire today. i went out to lunch with a friend, had a long conversation about our lives and didn't mention politics or security. But there is no ceasefire - they're jerking our chain as usual - and only fools like me are fooled. That's why we found parking at the mall, why there was a table free on the balcony of the restaurant, why there was room at the hairdressers. So i'm keeping my slippers close and my phone closer and ready for action.

When Ronny and Liora Sommek met with me the other day he reminded me of the event i had twenty years ago at the clothing shop on Dizengoff Street to launch my book, "The Love of Clothes and Nakedness." The company still exists but not on Dizengoff Street where the shop was roomy and central, and the owner, Sybil Goldfeiner, has gotten into other activities but it was a wonderful event. He had a picture, he told me, and i asked him to send it to me - of Dahlia Ravikovich and Ronny and Sybil and me. I didn't believe it, but within a few hours he sent it. 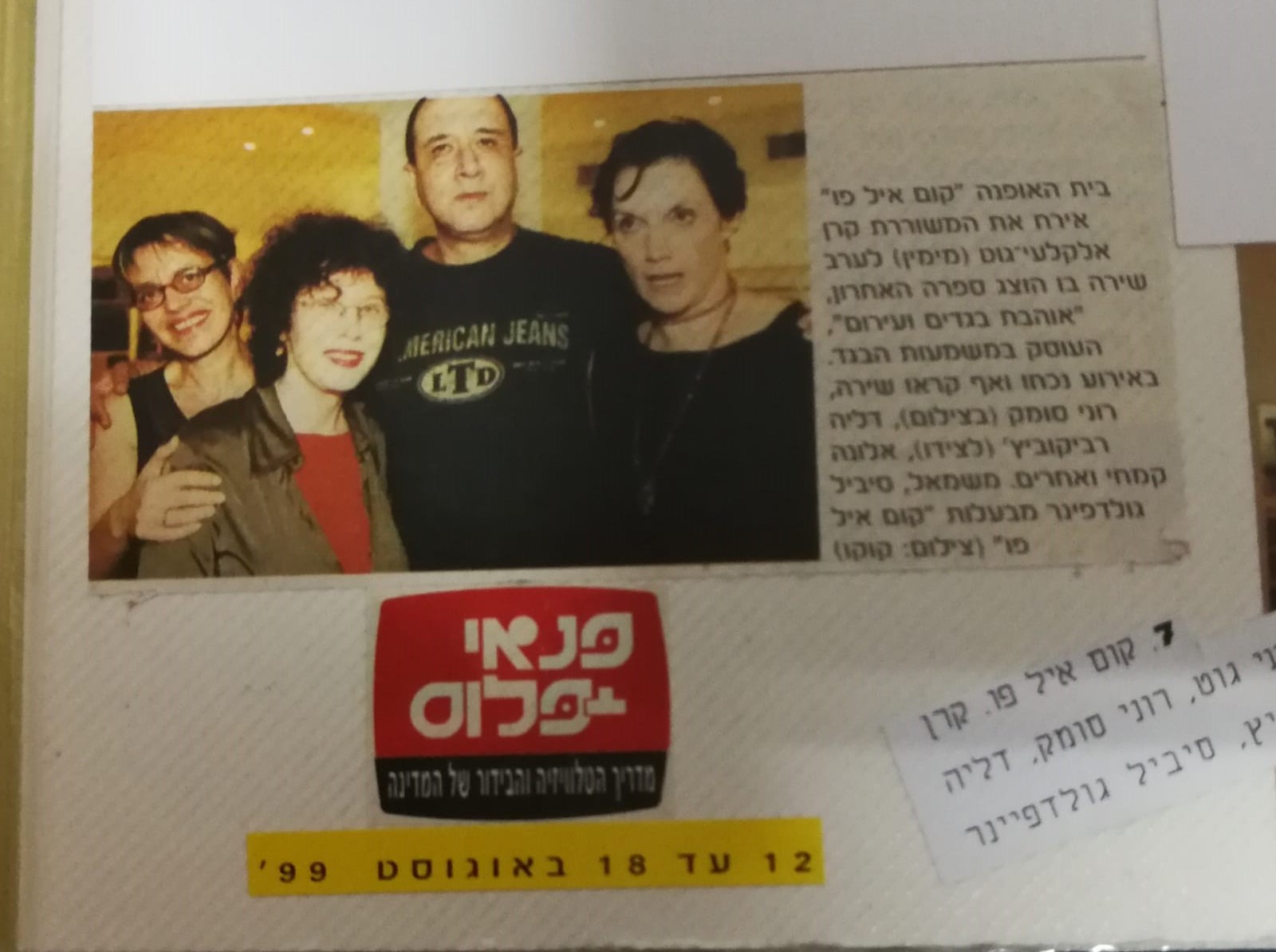 Those were days when i had the confidence in the ability of poetry to change the way people see things, and in myself as an agent of change.

So I immediately translated a poem for Rony in gratitude for the picture. Here's a draft: (Dont Use It)

Blues for a Hitchhiker From the Navy

What kicks can be kicked in army boots
That are choking on the laces binding them?
To what height can grass grow in the lot
That was never a plot?
Just a crossroads
In the heart of the desert.

Like with soccer, I begin with the configurations:
On one side is her, a naval officer
And it’s impossible not to compare her shirt buttons
To the guard boats
In an extremely heaving sea.
On the other side, there is me. Barely a month after I was condemned
To a khaki uniform spotted
With gun oil.

"There should be no misunderstanding here," I whispered to myself even then
"This is not the beginning
Of a love story. "
And still, if I remember the fate of the door slammed
In the car that took her away,
It’s because the next day
And the day after the day after
In the trek of navigators
I was the only one whose heart’s compass took
To another place .

Ezi and I have been translating some writers from the beginning of the twentieth century. it is difficult work because the language has changed so much since people like Avigdor Meiri and A.L Gordon wrote their poems and novels and letters in Hebrew. They were writing in a second language that lacked a wide vocabulary and they had to stretch and pull and rearrange and invent words just to express the most basic thoughts. In trying to translate them I feel the difficulty of writing from the inside, as if i myself have the same problems they had. It is quite strange. and it helps me get through a day of terrible coughing

You think Tel Aviv is like a cold anonymous city, but often it feels like a vast neighborhood. Even if you don't know the people, they;ll stop you in the street to give you advice, or ignore the fact that you've lost your skirt, or because you were friends twenty years ago. i've had one of those days in the city, even though i'm still coughing and chilling.

tomorrow will be cold and rainy. it's my birthday and we will be celebrating en famille. i had wanted to have a big party but i couldn't get it together. Anyway it is impossible to have a party when people in the south are suffering shell shock, and people in Gaza are ready to die from desperation.