I don't know where else in the world you can have a serious conference about English in Unexpected Places with a cat in the audience. He actually waited until the theory part was over, and the poetry reading began, and then he walked in, jumped up on a chair, and listened. 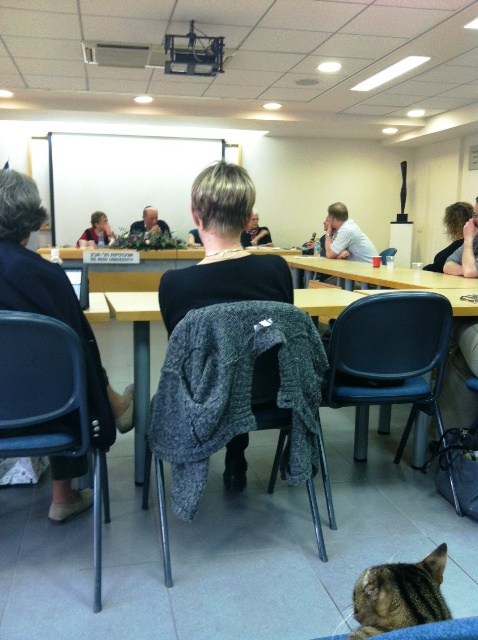 The ear is clipped because he's been neutered. He's one of the many cats who live in Tel Aviv University's Gilman building and enjoy a higher education.

Cat at the conference

Now that
the theoretical part
has passed,

work the room a bit
Then jump up to sit


next to
a gentle lady

and give my full attention
to the poetry reading

Whatever they say
they make me purr

That's it - the perfect life: Omer and Papa 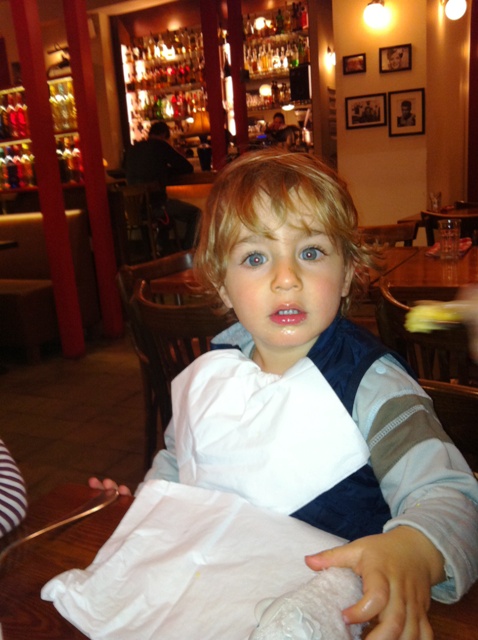 we had the osso bucco,ravioli, good food. 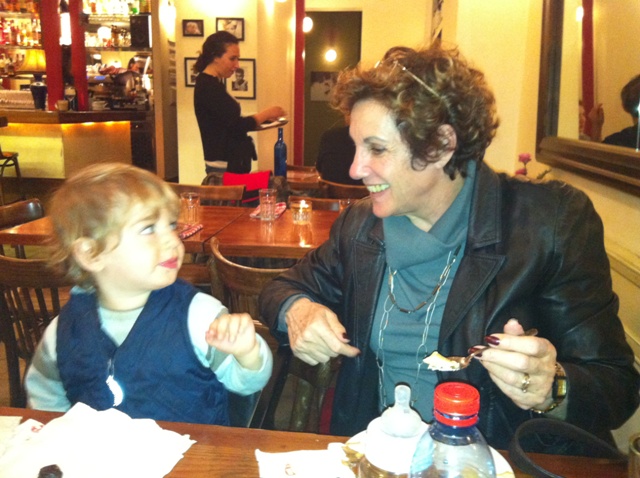 Periodontist has scheduled me for next Friday so I can be recovered in time to cook for the seder. Of all the options having it at home seems the most comfortable. Although I'm definitely going to skip the "Shpoch" section.

What we call in our family the "Shpoch" is the part where you open the door for Elijah and ask the Lord to "Pour out Your wrath upon the nations that do not acknowledge You, and upon the kingdoms that do not call upon Your Name." I always find it a bit uncomfortable, but only really paid attention to it one year when we finished early and were bidding farewell at the door to our Christian guest when the neighbors' door opened and the prayer echoed in the hall. As if the wrath was poured out on him.

But this year. with the tens of thousands of refugees from Eritrea sleeping in the parks of Tel Aviv it is particularly painful. The stories they tell of their journey here is even worse. Graphic videos show some of their torture, but rape, torture, slavery and organ trafficking is common. The other day I saw a guy going through the garbage near a restaurant for food and I knew this holiday of Passover has to be dedicated to them.

The story of the refugees going through the Sinai was on the front page of Haaretz in Hebrew today but absent from the English. Since we went through the Sinai long ago, we should be very interested in making sure that others make it through safely, but I'm not complaining about Israel. Sinai - as I have often said - is full of Al Keida and other terrorists. All my friends who used to visit often stopped going there long ago because of dangerous experiences or the threat. There is nothing we can do short of going into Egypt where we have no authority at all. But it tears at my heart. And the fact that a resident of Rahat in Israel was also involved in torture and extortion is unbearable.

Our news today is good - Ezi seems to be tolerating the Zevalin well. It will be at least six weeks before we can be sure and he has to have weekly blood tests, but hey...

Now, about our anthem. The catastrophe in Kuwait in which the Kazakhstan winner of the shoot was honored with the Borat parody was played instead of the real anthem has all kinds of ramifications - but I am not going into them. The one that bothers me most is that the winner, Maria Dmitrienko, was representing a country together with its anthem, and what was played did not represent her. The anthem and the individual have to be integral. And 20% of Israel's population is Arab.

And, almost instantly, he pointed out that I should add: " you should provide a translation of the verse -- actually I left out the word "yikkareh" -- so that it reads "ki beiti beit t'fillah yikkarei l'chol ha-amim" -- "for my house will be known as a house of prayer for all people" -- -- and the example becomes "my country will be known as a country of hope for all its people" -- you should also give its source -- Isaiah 56:7 -- so your readers will know that this anthem has been part of our consciousness for quite a while."

I think Joe should get full credit for the great idea and the wording, don't you?

Now I have to go ask some Moslem friends what they think of Isaiah. He's my favorite prophet because he sees both reality and possibility. Even though he doesn't see himself as one of the erring folk.