What can I say - i almost didn't write today. No bread in Gaza and we don't dare open the gates at Karni junction because of the clear warnings of terrorist plans there. No chickens because of a small outbreak of avian flu that is becoming an epidemic as the ministry of health can't figure out what to do. No medicines for thousands of critically ill because the government doesn't ratify their medications. No money for old people. And we're expecting the lowest voting percentage ever.

Remember, the lower the voting percentage the more likely that the extremist parties get in. And in a country this size each vote really counts. This is no time to imitate the U.S.

On my way to Rachel's birthday party, I heard on the radio about the terrorists with large quantities of explosives loose in the country. While the reporter described the possible entrapment of one pair of terrorists with 5 kilos of explosives near Latrun, I turned off to the shopping center and bought an inordinant quantity of clothes. Within twenty minutes. It was my defence against terror.

Bat-El, whose dream is to set up a model Ethiopian village in Israel, hosted us for Rachel's party and taught us about women's lives in Ethiopia and then here. She didn't tell the 'official story' (that you can find here) so much as the personal stories of women's work, women's lives, and the lives of jews. The empathy we all felt as women was simple and quite amazing. I didn't take notes, but here are a few pictures:

I was particularly enthralled with Bat-El's narration of the transformation of women's status after menopause. After years of being under the thrall of men in society, women gain respect and their acquired wisdom is sought and even revered. Now there's a smart society - well at least for my age group.

Here are the details about Bat-El Shmueli. She lives in Ein Hod and her program is called "The Ethiopian Experience." Her number is 050-6305850 and her email: batel.shmueli@gmail.com. She's used to large groups (although my own experience was with a very small group of women and it was amazing).

Something else I promised you, the view from the dance studio onto the synagogue next door. 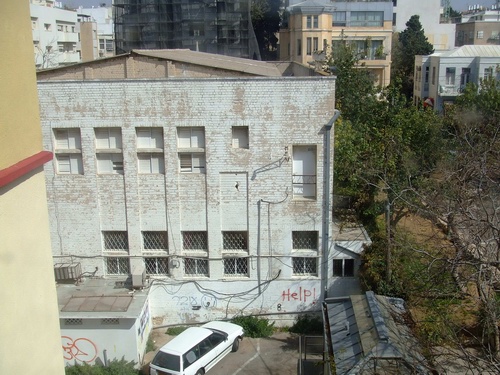 I'm crazy about the "help!"

Saturday night "Night People" (Roy Yarkoni, Yishai Sommer, Yael Kraus, and the gang - but without me) are appearing at Tmuna - on Soncino Street. They're doing an expanded version of "Panic" and "Night Hawks" and other stuff, like my own "Holofernes." It should be a great evening. Here's the link.

I wouldn't miss it. No, I won't be appearing. But "Night Hawks" is composed of all kinds of poems from stories of my friends and me so we're all there. Details upon demand.

This is Yael, who will be singing on Saturday. She may not approve this picture so it might be erased soon. But I caught her at rehearsals at a moment of rest. 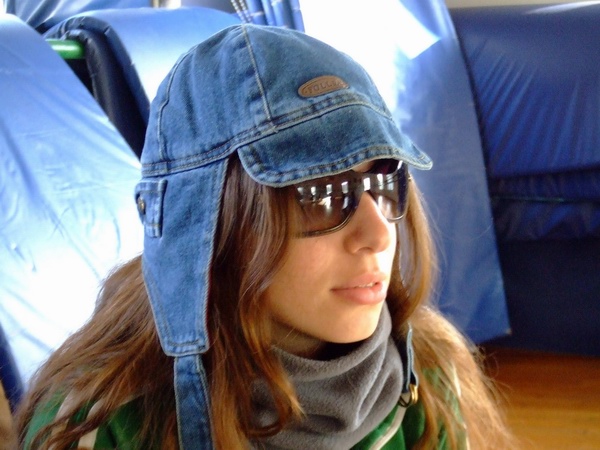 The elections continue to loom. In a daydream today while observing some of my favorite crows - and examining them for bird flu - at the university - i imagined a coalition government with Kadima and the Arab parties. It could work. What's stopping it - only - as far as I know - the fear that some other Igal Amir will come along and use cooperation as an excuse for assasinating the prime minister. But what do i know? I am only a bird-watching poet.

Have you thought about Arik Sharon today - i mean, what he is feeling, what he looks like, who visits him? He may have founded the new party that will take over shortly, but he's not news, and the elections go on without him, many others using his image somehow in their campaigns. As a human being, I am sorry for him, but as a prime minister - there is only one achievement - disengagement.

And we are all exhausted from the corruption, the poverty, the inequality, the instability, the dehumanization of the population. Our major concern is quiet - and everything we haven't experienced for the past years with Arik. Let us hope the new government will be a strong and humane one. For a more comprehensive analysis, see Robert Rosenberg.