still partying...talk to you tomorrow.

Let's start from now and go backwards. Early evening at Beta Cafe. I was avoiding that place for at least a year because the food was awful the last few times, but a birthday party brought me back, and the menu was delightfully rich and promising. All kinds of new things. But I ordered my early favorite, the Beta salad. When the food came, it was overall good. Not great, but good. Good company, though. Nice atmosphere too.

Last night we were included in a wonderful birthday party at Pappa's, and the eggplant gnocchi was unbelievable. Ezi says the linguini was on the same level. One more pisces tomorrow, and then the birthdays are done until passover.

For a change, we left the restaurant scene of Tel Aviv had a doctorate celebratory picnic this afternoon in the middle of the forest. Pine trees, wild flowers, hills... the air of the Jerusalem hills is always intoxicating, but on a clear spring afternoon, it's another world. We moved from there to the home of some friends who live on the edge of the forest and look out from their flower garden onto valleys of trees. The birds celebrating loudly cannot be reproduced, but I'll see if I can't get Ezi to reproduce something of the atmosphere in pictures. The house is a compilation of the natural and the cultural in the land - Hebron embroidery on the bathroom curtains where you can sit in the jacuzzi and look out at the Keren Kayemet trees, sculptures from ancient and modern Israel, Palestinian embroidery on the turquoise wood cupboard. Inside and outside, everything fit together in this house. That's the way everything should be here.

here's a clip of panic ensemble doing parts of my poem 'duration and expanse'on youtube. The whole poem is here:

The clock stopped when she went to sleep,
began its ticking again when she woke:
she was sure of it, thought
to catch it with a sneak awakening
while feigning deep
breathingó
to capture its
dependence on her consciousness

What about those rooms that disappear
when you leave them, the bus
that vanishes once you step off,
the city created
just for the scene of your visit,
not on the mapó
that doesnít exist
in the real
world? What
do you do
with those places
once
youíre through?

Letís say those loins
release a child,
with that slippery thrill
every mother recalls,
and the child grows, changes
every year, then goes off,
renounces you, disappears
into a jungle youíve never been nearó


do you still remain a mother


no witnesses,
no documentation I canít say
was fantasy

Never believed
in lies
unless they countered
someone elseís
testimony


Never believed in time
that did not synchronize
with anotherís watch

Ah, but those tales
that have nothing to do
with the real world,


only the ticking
of some universal clock


So much better
than feigned facts,
accuracy

Every night
a different story


every story
a different night

I tell you I will
beat those systems
óall of them

Because Rachel's birthday is on the first day of spring, it was particularly appropriate that she celebrated it in nature. But women of our age touring the Safari?

Ah, it is always an amazing place. The large herds of zebras, the rhino girlfriends who go everywhere together, the huge numbers of migrating birds who spend a night or two in the ponds, the lions playing on their 'omegas' (meat-filled tires on a rope tied between two trees), the cubs, foals, and chicks - all of this was perfect for grandmothers like us. To talk with an orang-otang like Moshon

to feed a giraffe

I couldn't see to snap pictures with my cell phone - didn't even think to take a camera - and certainly didn't aim - but here and there some things came out: 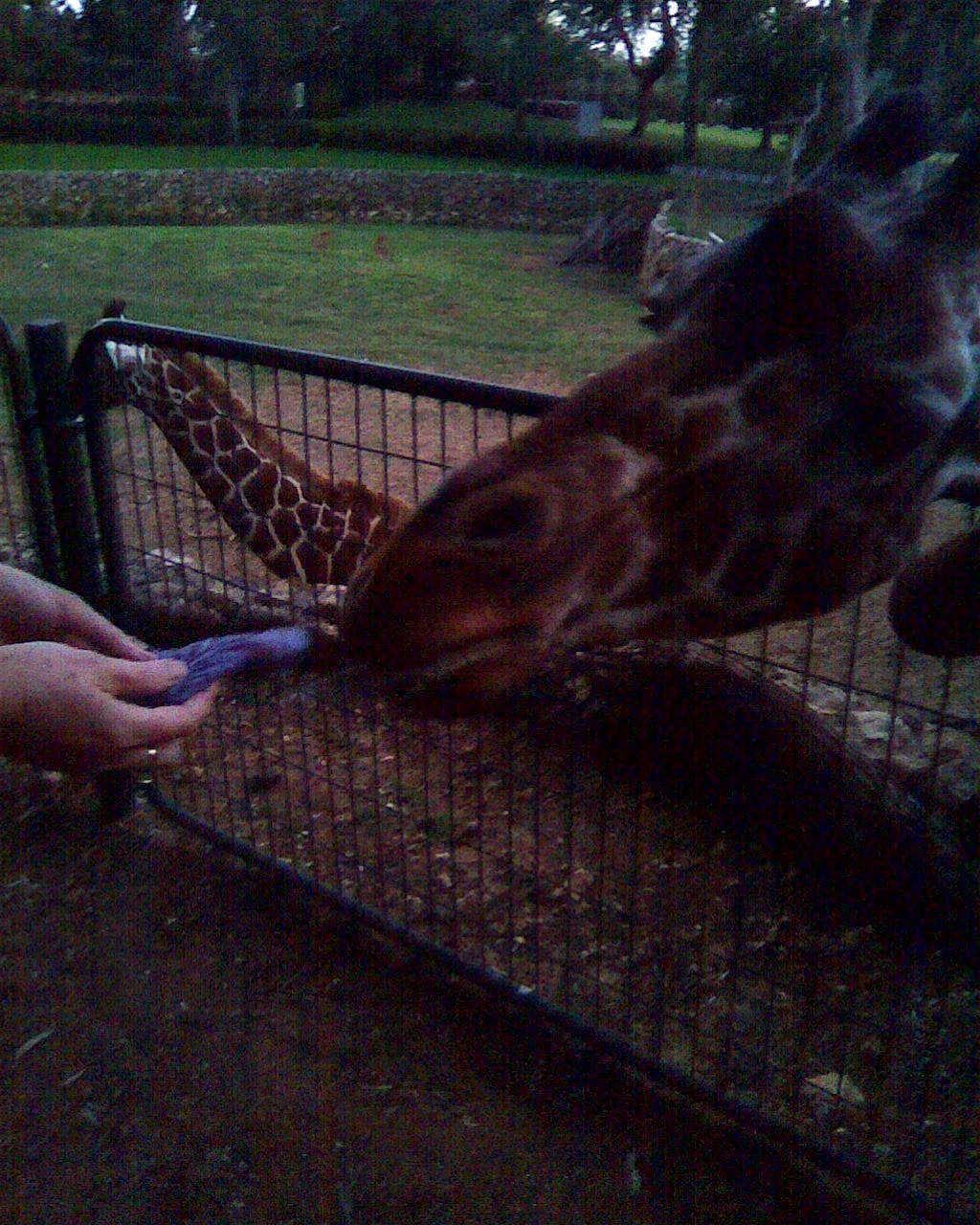 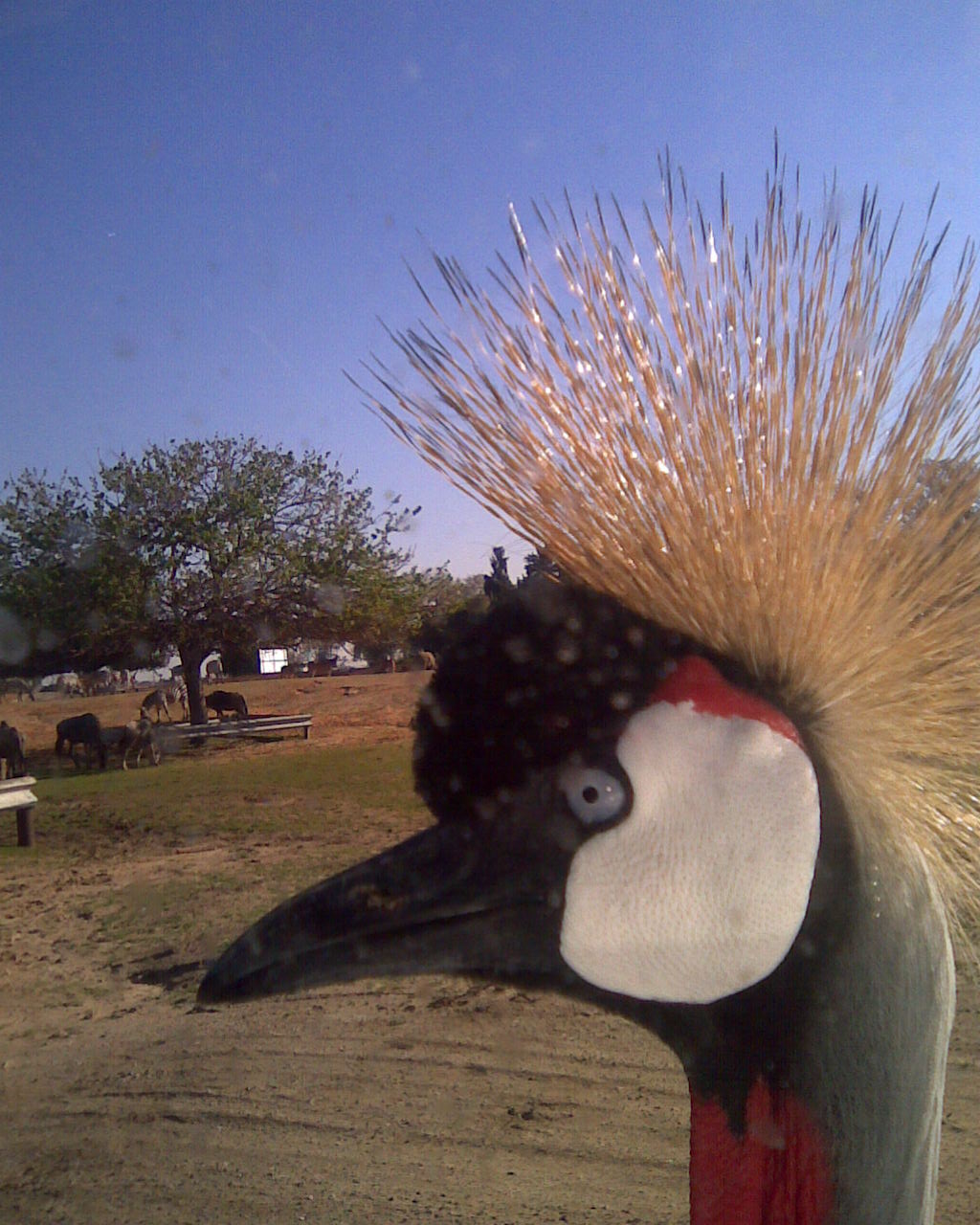 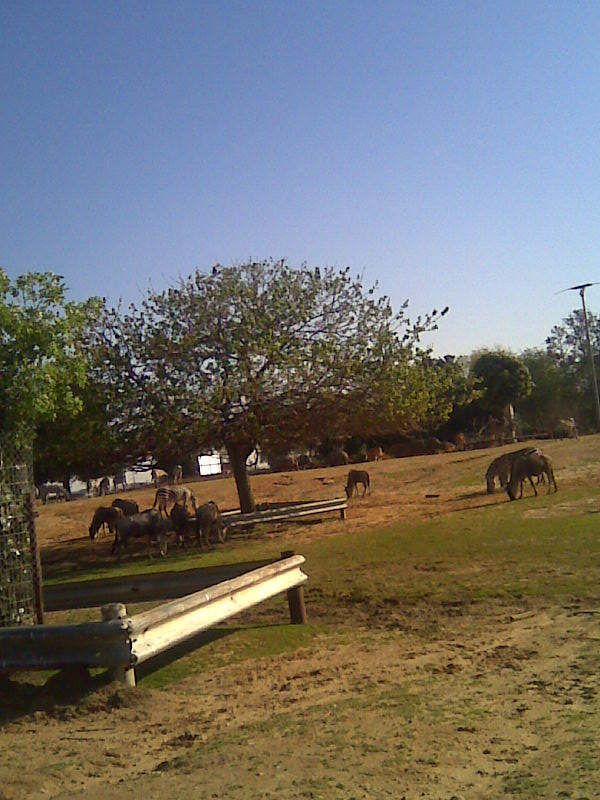 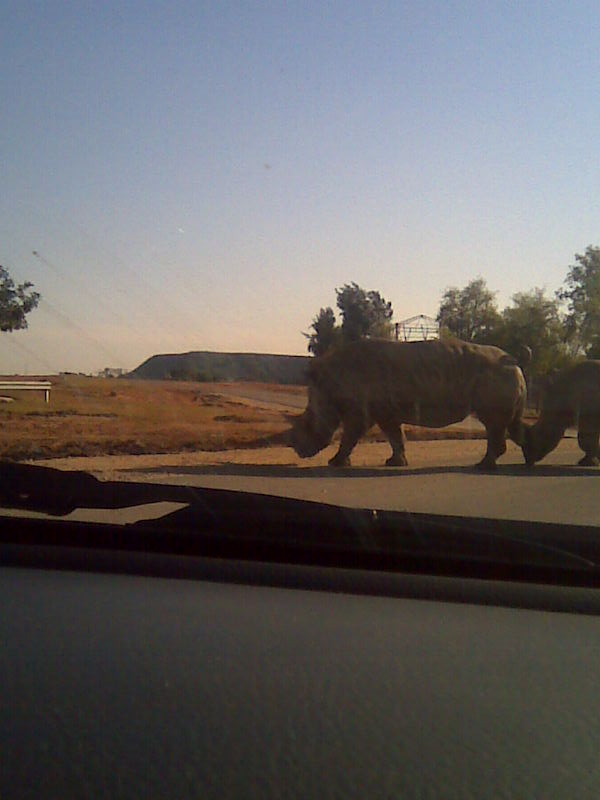 All in all the most invigorating birthday I can remember. Wish Ezi was there to take real pictures. A friend did, however, and when I get permission I'll put them on.

Another word about spring. An eternal optimist I'm going to do whatever I can to help the latest peace talks get off the ground after the holidays. It's true we have to stop seeing ourselves as of necessity absolutely strong, and have to learn more about dialogue. Of course the other side has to learn that we are not monsters and our blood is not different from theirs.

Who has time to breathe before Passover? Even the dermatologist (who once again cauterized the nail of my poor toe) had a madhouse in his otherwise cultured and artistic waiting room. I watched the news there over the heads of four little blond girls, learning about the crazy decisions to cut the building of the underground emergency units in Ashkelon Hosptial. While the news was all about breaking boundaries and lobbies twisting logical government decisions to fit the will of minorites, I watched one little girl purposely drop her paper cup of water on the parquet floor and step away, as her sister destroyed the candlabra and the tablecloth. I sat speechless as Ezi commented on the tv news - "What should we expect? If only 50% of the non-religious vote in elections, we don't have a right to complain that the extreme parties take over." Yes, I'm always speechless when I should be working towards having a voice. As Ezi's mother used to say, "we won't let them s--- on our heads. We'll open our mouths!"

For a petition against the madness in Barzalei Hospital in Ashkelon, and the responsibile assistant Minister of Health, press here . It's in Hebrew though.

Once again the British prove their mettle to me. Since the days of Lawrence of Arabia when they promised this country to both the Arabs and the Jews they have been messing up the Middle East. Not that we don't deserve a good talking-to, but that involves MORE diplomats, not less.