All I hear about the "Get out of Gaza" demonstration is criticism. From "Why now? We're getting out anyway" To: "What happens if not enough people show up? It might harm the cause if it seems that few are for it." And no one I know is going. Even though every one believes we have to get out of Gaza. Explain this to me.

Some one wrote me asking whether poetry in Israel is availble on line. Since this isn't the first time I've been asked this, here's a partial answer: Aside from the usual channels, Keshev has a site through which it sells. (Kibbutz Hameuchad does not.) It isn't in English, though.

Promised you pictures of the Dead Sea over a month ago. But you can get them anywhere on the web. See a wonderful site Here for example. But here are two Ezi took in the hothouses of Naot Hakikar where they grow - would you believe it - figs - trained to be a good height for picking and clean of pesticide because they're in hothouses. 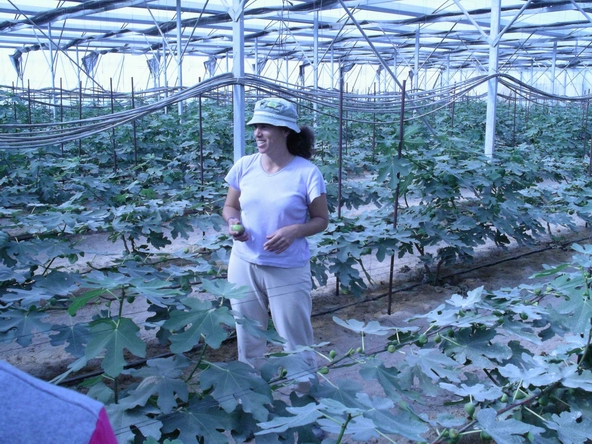 look at them up close 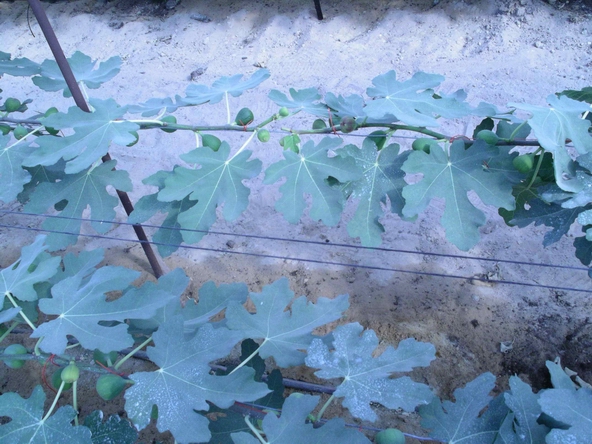 So here we are crabbing about why no one went to the demonstration yesterday (10,000)to get out of Gaza and only a few (1000) today for the students' protests. But we didn't go either. Health reasons. Still I am really hoping the students' protests extend, as it appears they are doing, to the faculty and teachers and pupils all over.

Sir Leslie Porter, the President of Tel Aviv University, died this afternoon. Anyone who knew him was privileged, and I can remember many evenings he entertained us with his stories of being in the British Army in Egypt during WWII, or his lighthearted business adventures, his blue eyes flashing with joy. There was never any regret in his tales, no sadness or loss or regret, and this is the way I will always think of him.

So now we're moving into Aries, where I am home. For the funeral i have to cancel class, but in the evening i'm doing a little piece of Carl Sandburg on the army radio - galei zahal - i think at 10. It was great to encounter Carl Sandburg's poems after having learned them as a child, and then never hearing about him again. I really like his humanism and he sometimes reminds me of Tschernichovsky. The emphasis on humanity puts all the other values into a natural hierarchy. We really need to discover that simpkle humanism around here. Keshev press just released a translation of his poems by Moshe Dor and it reads like the original - clear and lyrical.

Two answers to FAQs:
1) I don't always mention people because they sometimes get upset by what I write and request changes. I don't change (except in one case) so I'd rather just say what I think without getting into personalities. I don't usually mention my family for that reason.
2)My birthday is indeed on the 29th, and it is a round one.

Born on the last night of the buzz bombs on London. My mother said she was just finishing up with the Seder dishes and when her water broke. "Time to go to the hospital." My father recommended waiting until the morning, but she insisted, and I was born somewhere around 3 a.m.

Reading Imshin's blog, I realized that somehow I am out of the Purim holidays this year - too many tasks to make up. So no costumes, no masks... maybe it's not too late. Maybe we'll go to Boaz's party, even though we don't know anyone there anymore.

I finally checked out the English Ynet News Site. I don't know what I've been waiting for, because it's terrific. Particularly on cultural issues. But also on news -

I think I've already posted this site, but I saw it again on Imshin's blog, and saw it again. Great nostalgia about tel aviv: film

It's a Jewish Agency film from 1947 emphasizing the need for a Jewish State and the possibility of peace. I'm going to try to show it to the family who remembers those days here and will have much more information about people and places.

Student strike tomorrow at the Hebrew University. It is very important that anyone who can get there - be there. If you see the film about 1947, you will hear the narrator talking about 50% of government spending on education. 50%. That's more like it.

Is it just that I want my job, or a higher salary, or better conditions? Look, I've been bringing MY OWN PAPER to the university for copying for the past decade, and I've never complained. And if the quality of the education was good I wouldn't kvetch about paper. But there is no way I can give what the students need when I have more than three times the number of students I should have, poor local conditions for research, and (this is the good, but difficult part) very very high standards.

Saw the film again. Robert pointed out to me that the municipal budget of Tel Aviv was 53% for health and education. And the big student demonstration today in Haifa indicates that they too are worried at how the percentages have diminished. Limor Livnat says the students have totally lost it - they don't even know what they're demonstrating about. She says every thing is fine or will be soon. Goodness, why are all these silly professors complaining that higher education is collapsing?

So we escape into nostalgia. I play the Tel Aviv film for Ezi and get details. He knows the streets, the sites, the ice cream parlor, the synagogue (his grandfather built), the zoo.

And we didn't stop there. Robert said there were other films so I looked them up. The Spielberg Archive has lots of movies. And we're going to see them all.