Beware the Ides of March. I always do.

But first a retrospective light look. The Yiddish Purim Card, in which the monkey makes a formal greeting for Purim in the manner of an uptight radio commentator from the '50s, quotes the rhyme "Heint is Purim, Morgen is ois. Gib mir a groshen, und varf mir arois." "Today is Purim. Tomorrow will be no more. Give me a penny, and throw me out the door." When I was a child we referred back to this rhyme -- as quaint, as something that might have been appropriate for the shtetl, but that world was gone.

You walk through the arch of titus and the artifacts of the second temple are being taken away on one side, and the soldiers led off to slavery on the other.

I don't know what's going on with the traffic around here - we've been caught in it almost every night in recent weeks, coming late to everything. Last night we made plans to meet in Mishmish - real early - before it fills up - when the music is romantic and '50s, soft - and there's no smoke. But by the time we made it - almost 9 - people were already beginning to crowd in. Tonight we were so late to a surprise party the guest of honor was walking in and we ruined the surprise. But we really spent almost an hour trying to find alternative routes. Last night for instance we got stuck on Ivn Gvirol so tonight we went down Derech Namir. Bad idea. Where are all these people coming from? Where do they go? It's not like they're going home from work - it's the wrong time, wrong direction.

Have you seen this guy? 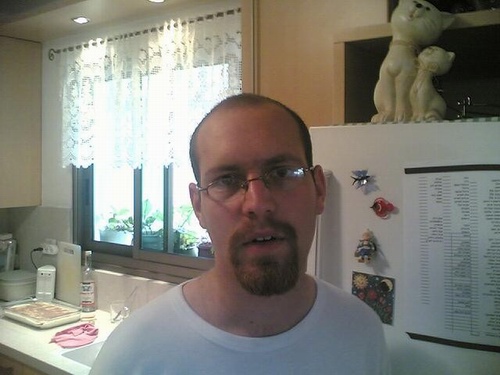 Call this number if you've seen him since the 7th of March.

As I was rolling up my other sleeve, the hemotologist said: "You've been here before recently, haven't you?" "Yes," I answered, "Do you recognize my veins?" "No. Your name. Because my maiden name was similar, Hargut, from Poland." I explain that the name is from Hungary, and was anyway given to my husband's family by Franz Joseph because there were too many Katzes for his records.

But I go home and think that this is such a typical conversation for my generation. Everyone might be interested in these things, but older people stretch their imagination looking for family connections. It is caused by the break with the past that the Holocaust created.

What was all the noise outside just now? I could swear I heard an explosion, then shots, then police sirens. But all they are talking about on the news is avian flu - a subject that literally makes me sick to my stomach. I just don't like anything about what the world has been doing to combat it. I mean it is too little, too violent, and too late. And the birds that wake me up every morning - we have a responsibility to them. All right, maybe I've gone totally crazy. I've got a photo shoot in the morning, nothing to wear, and no 'look' and i seem to be obsessing on that instead of the important things.

What an sociological wonder Shenkin Street is! Not that had the luxury of actually walking there, or drinking coffee or anything like that. But from the dance studio windows there are some amazing sights. One example: the synagogue just opposite the dance studio, where you can imagine an entirely different world, an alternate mentality, a world of peace and wonder - except that written on the wall is the word, "HELP!"

Or this typical picture of a house on Ha'Avoda Street.

Half new, half old, half painted...

I seem to be coming down with something. All I can think of is my mother-in-law's classic spiel: "Oh, my head aches....And my stomach hurts....And my feet ache...And my chest... and my liver...and my knees...And I myself don't feel so good either."